Against the Culture of Death 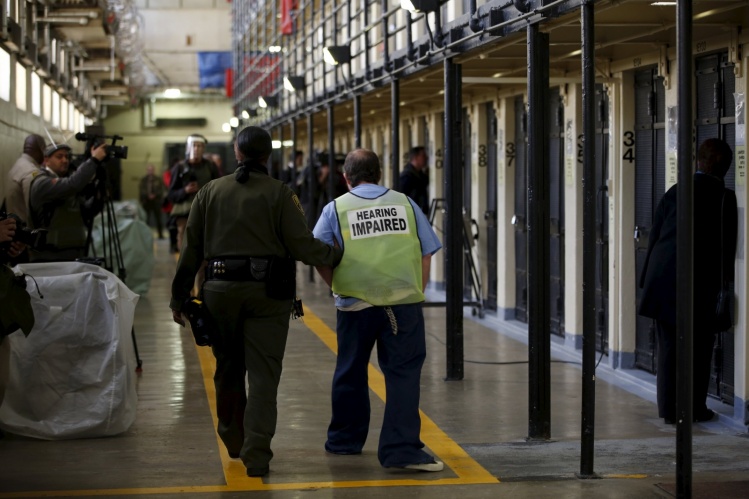 A guard escorts a hearing-impaired inmate down a corridor during a media tour of death row at San Quentin State Prison in California. (CNS photo/Stephen Lam, Reuters)

Karen Clifton is the Executive Director of Catholic Mobilizing Network. She began her work against the death penalty in 1996 in Houston, Texas, when her social-justice and advocacy projects intersected with those of Sr. Helen Prejean, who became a national figure after the release of the film Dead Man Walking. In 2008, Clifton spearheaded the formation of the Catholic Mobilizing Network. Based in Washington, D.C., the network seeks to apply the church’s teaching on the dignity of human life in the areas of capital punishment and restorative justice. Commonweal contributing editor John Gehring interviewed her by email.

John Gehring: When Pope Francis addressed Congress in 2015, he called for the abolition of the death penalty because, in his words, “every life is sacred.” Just last week, the pope said the “death penalty is inadmissible” no matter how serious the crime and that executions are “contrary to the Gospel.” How has the pope’s strong voice on this issue helped the Catholic Mobilizing Network (CMN) in your outreach and advocacy?

Karen Clifton: The pope’s message lifts the ambiguity. Our last three popes have been very outspoken against the use of the death penalty in the United States. We hear many Catholics state the pope’s teachings as “his opinion.”  This definitive statement makes it clear that the work to end the death penalty is a vital part of the church’s consistent prolife ethic. All Catholics and people of goodwill are now challenged to join this work to build a culture of life. Lifting up the Gospel message of mercy and reconciliation, the Pope has reminded us that the death penalty is contrary to our understanding of human dignity. As Catholics we are to be consistently pro-all-life.

JG: How do you engage with Catholic dioceses and parishes to educate clergy and lay Catholics about the death penalty?

KC: There are people in every diocese across the country working in prisons, jails, re-entry programs, and walking alongside victims’ family members in their grieving and healing. There is a hunger for more resources and tools that address the brokenness of the criminal-justice system—especially the death penalty. CMN works alongside Catholic Conference directors, diocesan Social Justice and Respect Life coordinators, and in hundreds of parishes to disseminate educational resources, advocacy opportunities as well as prayer tools to mobilize Catholics around this important prolife issue. Lifting up the Gospel message of mercy and reconciliation, we emphasize the church’s consistent ethic of life to transform hearts and minds around the need to end the death penalty.

JG: What motivates you to do this work? Do you have a personal story or connection to the issue?

KC: I’ve been involved in this work for over a decade. I’ve heard countless stories of those affected by the death penalty. Murder victims’ family members, perpetrators’ family members, criminal-justice personnel, and the wider community continually reinforce the message that the criminal-justice system is broken. Then in hearing the stories of the 160 people who have been exonerated from death row since 1973, I’m convinced this system has to stop. We have the means to protect society and taking life perpetrates violence.

I personally believe in the dignity of all life. We are all broken people. I am so grateful for a merciful God who like the Father of the prodigal son shows mercy even to the guilty. The least among us, those lacking love and opportunity in life, are the most likely to find themselves in our criminal-justice system. The Gospel calls us to care for the least among us. It is through encountering the other that we are transformed. Our models of faith are the victims’ family members who spend their lives working to end the death penalty. They do not want another person to experience the excruciating pain of losing a loved one. They are being present to the dignity of another, even at great cost to themselves.

The least among us, those lacking love and opportunity in life, are the most likely to find themselves in our criminal-justice system
sharetweet

JG: Have you ever witnessed an execution? What was that experience like?

KC: I have accompanied a murder victim’s family during an execution in 2004. It is torture. Time moves so slowly, and you cannot believe you are sitting watching a calculated, cold-blooded killing. Executions are done so methodically and in such sterile surroundings. It seems surreal. It is so painful to watch someone have to anticipate the unnatural death of someone they love. With the stigma of their guilt, family members are rendered voiceless as they watch their loved one killed. They are told, “It is justice.” It is revenge.

The cause of death on the death certificate of the person executed is listed as “homicide.” The pain of losing a loved one by any form of homicide is painful for everyone. The process of executing someone has wide rippling effects: the legal teams, the prison guards, the witnesses, the children and extended families on both sides, those who vigil outside of the death house and our community. This normalizes the culture of death.

JG: October is “Respect Life Month” in the Catholic Church. Why is advocacy to oppose the death penalty a prolife cause?

KC: “Respect Life Month” calls us to deeper reflection and education on what it means to be consistently prolife. The church believes in the dignity of all life from conception to natural death. The death penalty is not a natural death. Our task as Catholics is to promote the dignity of all life, including those who commit great wrongs. As Pope Francis definitively stated, the death penalty “wounds human dignity,” and stands in opposition to the Gospel’s teaching about life. Building a culture of life demands that all Catholics join the work to end the death penalty. We have seen lives saved by the advocacy of Catholics, through our Mercy in Action Project. Catholics have spoken out, written letters, and made calls to governors and parole boards on behalf of people scheduled to be executed and have saved lives.

JG: Your organization is circulating a “National Catholic Pledge to End the Death Penalty.” What is it and what impact do you hope it will make?

KC: Lifting up the call of Pope Francis, the “National Catholic Pledge to End the Death Penalty” invites people to educate, advocate, and pray to end the death penalty. It reminds Catholics of the mission of the church, the message last three popes, and the statement from the U.S. Conference of Catholic Bishops to respect all life. Signed by twenty-five bishops and cardinals, as well as dozens of prominent Catholic leaders such as Cardinal Daniel DiNardo, Sr. Norma Pimentel, MJ, Fr. James Martin, SJ, Sr. Helen Prejean, and Helen Alvare, the pledge is a vitally important initiative in the church’s mission to be consistently prolife.

JG: A Pew Research Center poll last fall found that Catholics overall opposed the death penalty (46 percent to 43 percent) but that white Catholics supported capital punishment 54 percent to 39 percent. How do you try and convince Catholics to change their mind on this issue?

KC: Stories change hearts and minds. Arguing facts, though informative, is a harder way to change minds. Those who have suffered or been affected by this system need to be heard. They know that taking another life will not bring back their loved one. Grave harm needs healing, not more killing.

Transformation takes time.  We need to listen and walk with people on their journey from vengeance towards mercy. Following Jesus is not easy.

Unfortunately, there are Catholics who don’t know the church has a teaching against the death penalty. Pope Francis continues to clarify the church’s teaching, in no uncertain terms.

JG: What is restorative justice and how have you seen it work?

KC: Restorative justice asks these questions: What happened? Who was harmed? What needs to be done to restore the victim and community?

Restorative justice in action can be found in new approaches to sentencing juveniles. The victim is given a voice and able to express how they were impacted and harmed.  All who are impacted are part of the sentencing. Through the process of sharing their stories, both parties come to know each other.  This provides an avenue for the perpetrator to see their impact and take responsibility for their actions. There is an ongoing transformation that results on both sides.  The victim often wants the perpetrator to be part of the solution to end the cycle of harm.

JG: You're from Texas, a state that has a long and checkered history with the death penalty. Gov. Greg Abbott is a Catholic who supports capital punishment. As a candidate for governor, he said in an interview that “Catholic doctrine is not against the death penalty.” What would you say to him if you had a chance to meet?

KC: I would remind Gov. Abbott of Pope Francis’ clear and definitive statement that the death penalty is “inadmissible” and “contrary to the Gospel.” The U.S. bishops have for decades opposed the death penalty. The bishops of Texas—the state with the largest number of executions—have called this “undeniably a prolife issue.”

I would tell Gov. Abbott that the Gospel message is one of mercy and reconciliation, that victims of harm need healing and restoration, not vengeance. The church is not soft on crime, but believes a response to grave harm needs to be retributive but also must be restorative. The death penalty is never restorative.