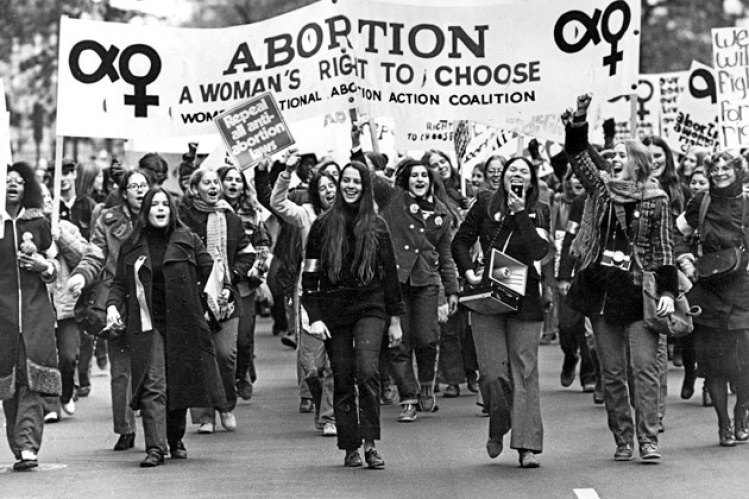 In reading the 51-page opinion of Mr. Justice Blackmun's decision of January 22, 1973, invalidating virtually all state abortion laws, one gets the impression that seven members of the Supreme Court who concurred in Blackmun's judgment came to the conclusion that abortion should not be a crime and then searched for the least painful and the least controversial way to justify their conclusion. Neither the majority judgment nor the concurring opinions of Chief Justice Burger, Justices Douglas and Stewart offer a very satisfactory rationale for extolling the right of privacy as the reason why the state may not forbid abortions in the first trimester of a pregnancy.

Justice Blackmun almost admitted as much when he opened his opinion by reminding us of Justice Holmes' admonition that the Constitution: "...is made for people of fundamentally differing views and the accident of our finding certain opinions natural and familiar or novel and even shocking ought not to conclude our judgment upon the question whether statutes embodying them conflict with the Constitution...."

The uneasiness of the Court on the abortion question manifested itself months ago when the Court ordered reargument of the issues. The epochal 7 to 2 decision of January 22 sets out clearly what was elicited on reargument: The opponents of abortion laws conceded that their case would collapse if a fetus is a "person" "within the language and meaning of the Fourteenth Amendment." The defenders of state abortion laws conceded on the other hand "that no case could be cited that holds that a fetus is a person within the meaning of the Fourteenth Amendment."

On these premises Justice Blackmun builds his case. He reasons that "we need not resolve the difficult question of when life begins" because "the unborn have never been recognized in the law as persons in the whole sense." With a wealth of legal citations Blackmun demonstrates impressively that the word "person" in constitutional and decisional law "has application only post­natally."

Blackmun does not, however, deny to the unborn all protection by the state. He firmly rejects the view advanced by those who attacked the Texas and Georgia laws at issue that a women's right to an abortion is absolute. A state "may properly assert important interests in safeguarding health, in maintaining medical standards, and in protecting potential life." (emphasis supplied)

It will probably be astonishing for a long time that three of President Nixon's four appointees to the Court embraced the elusive concept of "privacy" to reach the radical conclusion that the Constitution requires that all states comply with the situation in New York State where all restrictions on the abortion of non-viable fetuses have been repealed! The seeds of such a conclusion were, however, explicit in a statement last year by the Court when it recognized "the right of the individual, married or single, to be free from unwarranted governmental intrusion into matters so fundamentally affecting a person as the decision whether to bear or beget a child." (emphasis supplied)

The use of privacy is nonetheless astonishing. The development of the concept of privacy in Supreme Court jurisprudence is so primitive that Justice White, dissenting from the majority, states bluntly that he finds "nothing in the language or history of the Constitution to support the Court’s judgment.” White asserts that the Court has "scarcely any reason or authority for its action" and is using “raw judicial power" in ruling that the right of privacy has "sufficient substance to override most existing state abortion statutes." White sees in privacy only a reason to prefer “the convenience, whim or caprice of the putative mother" over "the life or potential life of the fetus."

Dissenting Justice Rehnquist has "difficulty in concluding" even that "the right of privacy is involved in this case."

The concept of privacy has been used by the Supreme Court sparingly and infrequently. It seems fair to state that the Court has utilized the concept of privacy on previous occasions when it was unable to find a more traditional avenue to reach the result which it desired. The Court in its abortion decision stretches the "privacy" of a pregnant woman to mean the undesirable consequences which would follow in her life if she were unable to terminate the unwanted pregnancy. Justice Rehnquist in dissent stated that this concept of privacy was not even a "distant cousin" to any notion of privacy hitherto acted upon by the Supreme Court.

Even though, however, the concept of privacy is not very well explained by the Supreme Court those who believe that there is no qualitative difference between viable and nonviable fetal life should at least be grateful that the Supreme Court has not ruled that the fetus in the first trimester of its prenatal life is not entitled to the protection which the law accords to a human being. The Court has only stated that the protection which the law has traditionally given by state statute to all pre­natal life must be balanced by the interest which a pregnant woman has in the preservation of her privacy. For reasons not very clearly elaborated by the Court the privacy of the pregnant woman must, when the fetus can live outside the womb, yield to the interest which the state has in protecting all human life, whether born or unborn.

Although the Supreme Court utilized the idea of privacy as the crucial concept in its abortion decision, the Court also employed an appeal to professional and public opinion to buttress its case. Extensive material is included in the majority opinion of Justice Blackmun about the recommendations of the American Medical Association and the American Bar Association to the effect that criminal statutes forbidding abortion should be weakened at least to permit the physical or mental health of the pregnant woman to be a determining factor in the decision on the advisability of an abortion. It is significant to note, however, that the Supreme Court opinion went beyond what was recommended by the prestigious American Law Institute as well as the AMA and the ABA.

It seems rather clear from the decision of the Supreme Court that seven of the Justices felt that abortion laws should be wiped out because, as everyone would concede, they are unenforced and unenforceable. From this premise the Court constructed a case based on the idea of privacy, the professional rights of physicians, the deeply divided state of public opinion, and the right of women to control the processes of their own bodies. All of these things—and a few more—are put together in an opinion by Justice Blackmun which is balanced with extraordinary care but which in the end seems to mean, at least to this writer, that statutes forbidding abortion are unconstitutional because they cannot be enforced in view of the deep division among the American people with respect to this subject.

It is noteworthy that the Supreme Court does not want to be charged with promoting disrespect for life or allowing abortion at will. The Chief Justice, in a short concurring opinion, concludes that "plainly the Court today rejects any claim that the Constitution requires abortion on demand." Many students of the Court will not be able to accept that disclaimer by the Chief Justice.

Good Results of the Decision

Among the good results of the definitive opinion of the Court on abortion laws is the fact that for the first time the Court has cracked down hard on any non­physician or delicensed physician practicing abortion. The Court made it clear, moreover, that the state does have power to enact and enforce a law which protects the right to life of a viable fetus.

Another clear and desirable result from the Supreme Court opinion is the development that the medical profession is now the sole regulator of what standards should be followed by a physician who is requested to terminate a pregnancy in the first trimester. The millions of Americans who will be disappointed if not appalled by the Supreme Court opinion now must appeal not to the legislatures or the Courts but directly to those physicians who establish the ethical standards for the practice of medicine.

It is very clear from the Supreme Court opinion, furthermore, that the physicians of America no longer have any reason to be equivocal about abortion on the grounds that it is a matter regulated by state law. The physicians of America as of January 22, 1973, were given virtually exclusive jurisdiction over who will live and who will die during the first three months of their unborn existence. As never before, therefore, physicians must ponder the undeniable fact that their essential traditional role in society has been to save life and not to destroy it.

Many commentators on the Supreme Court's opinion will in all probability continue to attack and to some extent pillory the Court. They will be able to say with some justification that the Court's opinion will almost certainly have a tremendous impact in that it exalts the right of privacy of an existing adult human being over the basic right to existence of an unborn non-viable potential human being. Another possible consequence of the U.S. Supreme Court’s opinion is the possibility that abortion might tend to become the birth-control of the poor.

But those—and particularly Catholics—who for many years advanced their opinion that abortion is immoral would be wise to recognize that the strategies and arguments they have employed to influence public opinion, legislatures and courts were in large part rejected by the nation's highest tribunal on January 22. Yet those who believe that the inviolability of all human life, fetal or not, is the centerpiece of our civilization must not now be silent about their convictions. Their role will be different but there is some evidence to suggest that their new role may in the end be more successful.

Robert F. Drinan, SJ, served in the U.S. House of Representatives from 1971 to 1981 as a representative from Massachusetts. He was professor of law at Georgetown University Law Center until his death in 2007.