What It Got Right
By Cathleen Kaveny
U.S. Catholicism
Columnists
Vatican II
Women in the Church 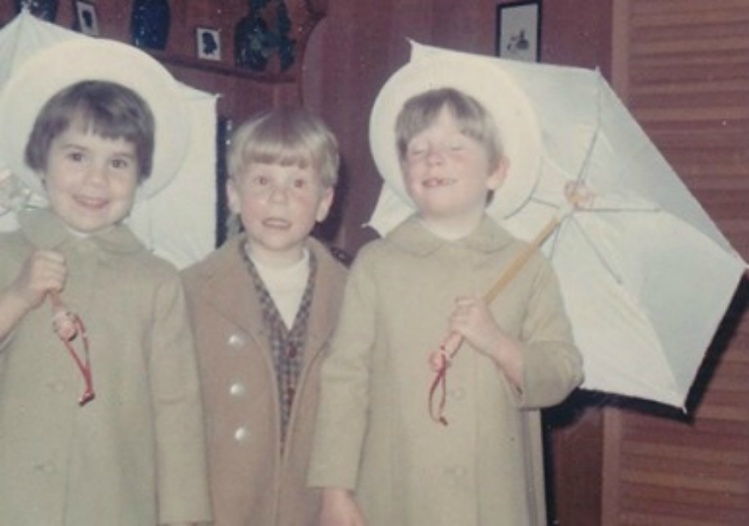 Unpacking some boxes after a recent move from South Bend, Indiana, to Chestnut Hill, Massachusetts, I came across my confirmation stole, which I made in the spring of 1978. The members of my class were told to personalize our stoles to reflect our unique faith journeys. Then completing my first year of Latin, I wrote the word Credo on one panel with Elmer’s Glue in the best cursive I could muster, and then covered the glue with a layer of deep blue glitter. On the other panel, I traced a simple cross, using the same technique. (This was not a theological statement: a crucifix was beyond my severely limited artistic abilities.) To make a border for my stole, I attached the cornflower trim that my late, beloved grandmother had used in sewing my First Communion dress eight years earlier. That dress was Marian blue. The girls in my First Communion class were discouraged from wearing traditional white lace dresses and veils, because they were expensive and impractical. We were all very disappointed at the time. Now, I am grateful. My grandmother’s handmade blue dress with its cornflower trim is a tangible sign of the communion of saints.

I do not remember much about the confirmation ceremony itself. I am pretty sure we sang “On Eagle’s Wings.” Don’t judge—it was the ’70s! I also remember feeling a mixture of accomplishment, relief, and release. We had just completed a demanding two-year program, fulfilling requirements that included weekly classes, multiple service projects, and periodic weekend retreats. Being confirmed meant that we were finally adult Catholics. We continued to go to Mass. But for most of us, that was the end of any formal instruction in the faith. Like other adult Catholics, we learned to juggle secular and sacred responsibilities. As time went on, the former began to crowd out the latter. My generation’s connection with the church became more and more attenuated. For many people I know, the connection was finally broken by the revelations about the sexual abuse of minors by priests and the way bishops covered up those crimes.

So, I belong to what many Catholics now dismiss as one of the church’s lost, post–Vatican II generations. Catholic prelates and internet pundits regularly scorn the fifteen years following the Second Vatican Council as the “silly season,” the era in which catechesis was evacuated of all substantive content in favor of supposedly trivial activities such as sharing, caring, and constructing felt banners. The catechesis of the 1970s became a cautionary tale, the model of what not to do in passing on the faith.

For many years, I was sympathetic to that analysis. But I am increasingly uneasy with the wholesale dismissal of the catechetical programs of my youth. First, the stock caricature of the period is unfair. The programs had far more content then they are given credit for. Second, the criticism only reinforces polarization within the church. Scapegoating 1970s religious-education programs fosters the illusion that the church’s problems can be fixed by going backward, by inoculating children with something like the simple question-and-answer method and content of the Baltimore Catechism. But the root problem facing the church, then and now, is not catechesis. The root problem is that Catholics didn’t have—and still don’t have—a way of dealing constructively with the substantial and irreversible changes in both the church and the culture. Those changes began before the council and only accelerated in its immediate aftermath. They show no sign of abating today, much less of being reversed. Among those developments were the suburbanization of the Catholic population, the astonishing affluence and high levels of education among post–World War II Catholics, the powerful shift away from Catholic defensiveness and toward ecumenical and interreligious cooperation, and the unprecedented rates of Catholics marrying outside the fold.

How did religious instruction try to deal with these changes? My parochial elementary school used the very popular Life, Love, Joy series published by Silver Burdett and written by Carl Pfeifer and Janaan Manternach. My own textbooks have long gone to their eternal reward. But my mother, who taught sixth-grade CCD for many years, held on to her old teacher’s handbook, which I recently perused. The content is surprisingly rich. The series proclaims itself to be “grounded in the traditional teaching and practices of the Catholic Church, while respecting recent developments in the theological and social sciences.” Among the theological developments it reflects is the emphasis on Scripture called for by Vatican II. The theme of sixth-grade religious education was “Growth in the Spirit,” which is explored in units titled: “Abraham and the Mystery of Faith,” “Moses and the Mystery of Freedom,” “David and the Mystery of Service,” and “Jeremiah and the Mystery of Hope.” The series took care to emphasize that these mysteries were deepened and revealed in Christ Jesus, and passed on in their fullest form in the Catholic tradition. A final unit in the book reinforces the Christocentric understanding of the themes by reflecting on the meaning of major Catholic holy days.

Judging by this text, the content of the series was both rich and deep. So what was the problem? Some Catholics have claimed that students were not sufficiently drilled with objective, impersonal, timeless propositions and rules. It is true that the emphasis in my program was on fostering personal and conscientious appropriation of a Catholic worldview, rather than on inculcating a set of prefabricated questions and answers. As I recently learned, the reason for this new approach was historical. Catholics were appalled by the carnage of the Second World War and the unimaginable evil of the Holocaust, and they were horrified by the possibility of a nuclear confrontation with the Soviet Union. Questions about the moral presumptions of the modern state, including the United States, had to be asked. Catechism-trained Catholics had participated in the Nazi horrors, often with blind obedience to authority. The goal of post–Vatican II Catholic catechesis was not to foster obedience, but instead to cultivate responsible men and women who were shaped by the Catholic Christian vision, sensitive to our debt to the Jewish people, and independent enough to stand up to injustice, even if sanctioned by church or state.

So the pedagogical strategy of Life, Love, Joy made sense in itself. It was overcome, however, by a wave of superseding events. My overwhelming impression of the church in which I grew up was instability. In first grade, the nuns at my parochial school wore long habits; in second grade, they wore short habits; and in third grade, they wore no habits. When I was a fourth-grader, the parochial school closed, and I went to public school from then on. First Communion was originally administered in first grade, and then it was administered in second grade. First confession was held before First Communion, then it was after First Communion, and then it was off on its own, in fifth grade. Parish music and décor changed radically with each pastor. The votive candles mysteriously disappeared one day and the tabernacle seemed to be on walkabout in the front of the church.

The culture was changing rapidly as well. Women were joining—and remaining in—the workforce in great numbers. Marriages were breaking up. Even the country seemed to be breaking up, as the battles over Vietnam were succeeded by the scandals of Watergate, which dominated television and newspapers.

My generation was not lost because of religious miseducation. It was lost because of the changes in the culture. No CCD program, no matter how rich and nuanced, could overcome the challenges created by the simultaneous breakdown and reconfiguration of the institutional Catholic world and the American social world.

Many influential prelates and lay Catholics now say that it is better to create a bulwark against the chaos, by presenting Catholic teaching and moral rules in a classical, timeless manner. The new Catechism seems to encourage just that. It abstracts doctrinal propositions not only from the context in which they were formulated, but also from the documents in which they were promulgated. This obscures the various levels of authority attributed to the various doctrines. It presents Catholic belief in the manner of a tax code.

I don’t think this will work. More important, if the vast numbers of young Catholics who continue to leave the church is any indication, it is not working. In fact, the glaring disjunction between an ahistorical presentation of Catholic teaching and the rapid pace of ecclesial and social change is likely to prompt even more skepticism and cynicism. I think that in the long run, the only solution is to teach young people how to think and pray within the context of a tradition that is not exempt from historical development and change.

The Roman Catholic tradition does not need to be afraid of history; its central claim is that God became a man who fully experienced the contingencies of life in a certain time and place. The relationship between eternity and history has always been porous. In order to articulate eternal aspects of relationships within the Godhead, for example, early Christian theologians drew upon concepts deeply tied to particular times, places, and philosophical schools. We are not God. We cannot escape the historically conditioned aspects of our tradition. Guided by the Holy Spirit, our community can come to a deeper understanding of the mysteries of our faith as it moves through time. God willing, it can even correct its mistakes—such as its acceptance of slavery and its absolute prohibition of lending money at interest.

Growing up Catholic in the 1970s gave me the sense that the church was unstable, even fickle. It also, however, gave me some wonderful role models for trusting in God’s fidelity in tumultuous times. Our CCD teachers were young wives and mothers who had grown up with the Baltimore Catechism. Unlike their own children, most of them had gone to parochial schools. No one had taken the time to explain to them the continuities between the pre–Vatican II era and the post–Vatican II era. They had to figure it out for themselves. And they did figure it out, because handing on their faith to their children was important to them. They were not nostalgic about their own religious education, because they had an intuitive sense of its limitations. At times uncomfortable about the scope and nature of the change, they put their trust in God’s providence.

I admire these women tremendously. Their example prepared me for life as an adult in a changing church much better than any amount of memorization ever could have. And I thank God for the communion of saints, those among the living as well as those in paradise.