From “Contraception and Honesty” 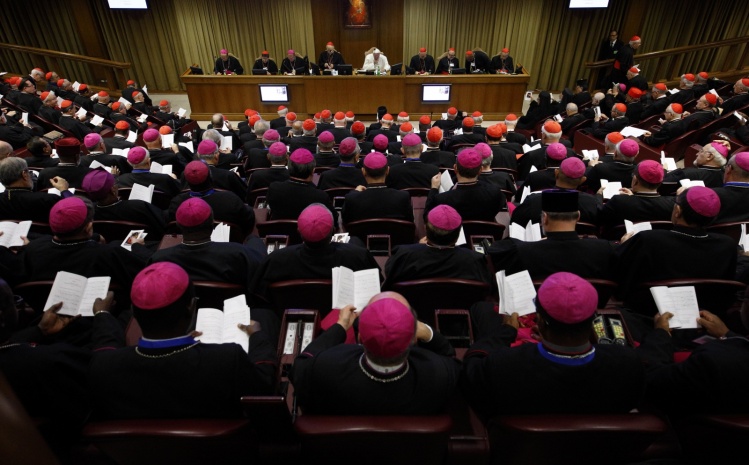 Pope Francis presides at a session of the Synod of Bishops on the family at the Vatican October 15, 2015. (CNS photo/Paul Haring)

Even if the condemnation of contraception is no longer a live issue for many Catholics, it is carved in granite for many bishops. No matter the testimony of Catholics, no matter the destructive consequences for the life of the church, no matter remaining questions for third-world poverty or combatting AIDS. There are simply too many in the ranks of the hierarchy, it is felt, including perhaps Pope Francis himself, who just cannot contemplate any return to the question. At least some accommodation can be made on Communion for the divorced and remarried or on pastoral attitudes toward cohabiting or same-sex couples. About contraception, biting one’s tongue is the better part of valor. If this is the situation, it is a very strange one indeed. All the former issues raise considerations much more radical than those raised by contraception: the indissolubility of marriage and the morality of sexual relationships outside of it. Is it the case that so many bishops have been appointed precisely because of their support for Humanae vitae that they are capable of flexibility on any other matter but that one? For them, is it thinkable to entertain questions about applying Jesus’ words on divorce and remarriage in Scripture itself but not about Paul VI’s words on contraception in a 1968 encyclical?

At this point, it is essential to recall exactly what this debate is—and is not—about.

It is not about the “contraceptive mentality,” not about “openness to life,” not about hostility to children or a refusal to have any. “Contraceptive mentality,” so roundly denounced by everyone, is an ill-defined term. It has been used to cover everything from acceptance of marital infidelity, degradation of women, a selfish refusal of the sacrifices incumbent upon having and raising children, and even resort to abortion. If [the Synod on Marriage and the Family] wants to condemn such conduct, fine. But that is not what caused the rejection of the church’s teaching by millions of Catholics who were palpably open to life, who were already parents doing their loving, sacrificial best to raise children, or who were young people looking forward to doing so.

Nor is the debate about Humanae vitae in its entirety, with its many insights and warnings. When I taught courses at Georgetown University on “Change and Conflict in Twentieth-Century Catholicism,” Humanae vitae was required reading. Inevitably, a good number of students were impressed by the encyclical’s sentiments about love, marriage, and sex. (I hope that the growth of the so-called hook-up culture in the past fifteen years would not make their successors more cynical.) They were also impressed with the encyclical’s warnings about potential misuses of humanity’s new powers over sexuality, although I personally believe that the document was far less “prophetic” than its advocates like to stress: it came, after all, when the Sexual Revolution was well on its way, and plenty of others, not necessarily opposed to contraception, had earlier voiced concerns about the morally disruptive consequences of separating sexuality from reproduction. But none of this triggered the massive turmoil surrounding the encyclical. That turmoil centered on several passages that condemned as “intrinsically evil” any act or means “specifically intended to prevent procreation” in any instance whatsoever of sexual intercourse (“each and every marital act”)—even “to protect or promote the welfare of an individual, of a family, or of society,” even “when the reasons...appear to be upright and serious.”

The debate is not about Natural Family Planning. (I use the capital letters to circumvent the argument that for human beings the use of pharmaceuticals or mechanical devices is just as “natural” as the use of thermometers and calendars.) Humanae vitae and Familiaris consortio go to great lengths (critics would say contortions) to distinguish forbidden contraception from Natural Family Planning and to praise the latter. In some circles, Natural Family Planning has been proselytized as an eighth wonder of the world, if not a kind of eighth sacrament. NFP is celebrated as highly reliable not only in spacing births but also in fostering marital communication and sexual sensitivity. The enthusiasm, frequently bordering on exaltation, is easy to parody, but I don’t doubt that NFP works for many couples and that its regimen and periodic abstinence can be spiritually meaningful and maritally enriching. This may also be true for Orthodox Jewish couples who observe the complicated restrictions of sexual conduct surrounding menstruation and other circumstances. It may be true of many couples whose occupations impose regular rhythms or extended periods of abstinence. […]

“Contraceptive mentality,” so roundly denounced by everyone, is an ill-defined term
sharetweet

Assume the best about NFP. Commend and encourage all who find it valuable and beneficial. It remains the case that the reasoning underlying Humanae vitae’s exceptionless condemnation of contraception does not rest on the effectiveness of NFP or its potential for spiritual growth and moral harmony. The key argument made in Humanae vitae about each and every act of sexual intimacy would be just as true—or just as false—if the only alternatives to constant or dangerous pregnancies were separate bedrooms or old-fashioned “Vatican roulette” or not even that.

The debate is not about birthrates, aging populations, exploding populations, Malthusianism, or neo-colonialism. These are all legitimate concerns with moral significance. But again the argument of Humanae vitae either stands or falls quite independently of them. The church may very well want to encourage larger families or discourage “breeding like rabbits”; the church may call for material, educational, familial, or communal resources allowing mothers and fathers to raise more children or plan for fewer. Those are different matters than the judgment that all resort to contraception is intrinsically evil. They should not be pretexts or rhetorical distractions for not examining that judgment.

Two ways of deflecting that responsibility are very much in the air breathed by the synod fathers. One stems from the fact that part of the context for Pope John XXIII’s establishment of a Pontifical Commission for the Study of Population, Family, and Births in March 1963 was a wave of alarm over global population growth. Some of the more dire predictions, like the original Malthus’s, proved wildly off the mark, a development seized upon by outspoken defenders of Humanae vitae as vindication of the encyclical’s wisdom. This triumphalism verges on hypocrisy. If population growth now appears more manageable (not that associated problems have disappeared), it is hardly because the world has observed Humanae vitae or adopted Natural Family Planning. What has succeeded is not the encyclical but its disregard: the steady acceptance of contraception in many cultures plus the draconian and morally disgraceful one-child population in China.

The second, more understandable diversion from the difficult issue of contraception is the resentment by many church leaders in the developing world of Western (especially U.S.-led) efforts, in conjunction with local family-planning advocates, to make contraceptives legally and practically available. This is easily viewed as a form of neocolonialism, lumped together with a host of other economic and cultural pressures disrupting vulnerable societies.

Humanae vitae is seen less in terms of its specific contested argument than as part of a defensive barrier to protect vulnerable societies against intrusions by the powerful and destructive West. Unfortunately, this kind of opposition is indiscriminate and too often allied with oppressive values (e.g., patriarchy) and myopic about who pays the price of the local status quo (e.g., women). It is also probably fated to go the way of Pius IX’s indiscriminate denunciation of “progress, liberalism, and modern civilization”—and with similar cost to the faith.