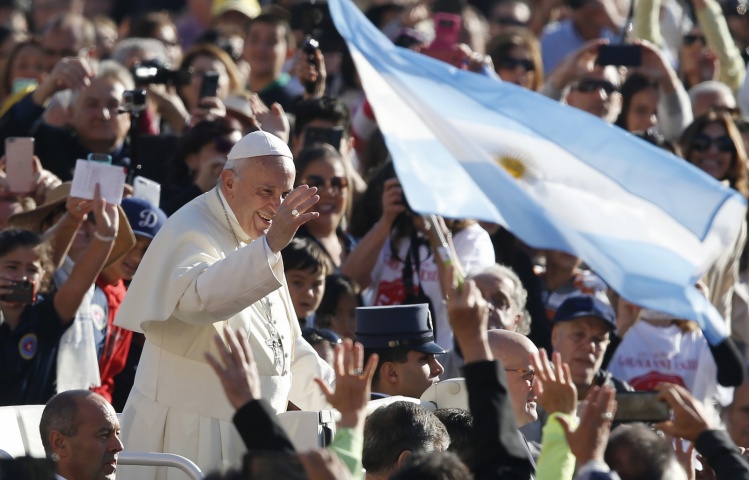 Argentina's flag is seen as Pope Francis greets the crowd during his general audience in St. Peter's Square at the Vatican Oct. 11. (CNS photo/Paul Haring)

Changes in canon law don’t come quickly, as the ongoing reception of Amoris Laetitia since its promulgation in April 2016 is currently reminding us. But the news this week that Pope Francis has officially recognized the interpretation of Chapter VIII of the exhortation put forth by Argentine bishops indicates that change does nevertheless occur. That interpretation, on “accompanying, discerning, and integrating weakness” in regard to the issuing of sacraments, was expressed in a September 2016 pastoral letter that was also addressed to Francis. It includes guidelines noting that there is no such thing as “unrestricted access to the sacraments,” but that in some situations a process of discernment “opens the possibility” to receipt of communion for divorced and remarried Catholics. In accepting that interpretation, Francis wrote (in Spanish) to the delegate of the pastoral region of Buenos Aires that “it fully explains the meaning of Chapter VIII of Amoris Laetitia. There is no other interpretation. And I’m sure it will do a lot of good.”

This counts as big news, but there are also some additional interesting facts about it. One is that Francis made his approval of this local interpretation public by having the epistolary exchange published in the Acta Apostolicae Sedis, the official gazette of the Holy See (available online here, pp. 1071-1074). It’s also worth noting what appears at the end of Francis’s letter: specification of the pope’s will, communicated in an audience on June 5, 2017, that “these two documents [the letters] be published on the Vatican website and in the Acta Apostolicae Sedis, as authentic magisterium [velut Magisterium authenticum].” This not only expresses Francis’s “authentic interpretation” of that particular passage of Amoris Laetitia, but also elevates that interpretation to the level of official Church teaching. The constitution of Vatican II on the Church, Lumen Gentium, paragraph 25, codifies the meaning of “authentic magisterium” this way: “[R]eligious submission of mind and will must be shown in a special way to the authentic magisterium of the Roman Pontiff, even when he is not speaking ex cathedra; that is, it must be shown in such a way that his supreme magisterium is acknowledged with reverence, the judgments made by him are sincerely adhered to, according to his manifest mind and will.”

Papal approval of the Argentine guidelines means for certain that “it will now be more difficult to defend any opposition to this ‘open’ interpretation of Amoris Laetitia’s Chapter VIII”, as Marie Malzac wrote in La Croix International. Just as certain is that there will be another wave of reactions from those who think Francis’s teaching on family and marriage is not Catholic, accusations that were already being leveled at the synods of 2014 and 2015, well ahead of the publication of Amoris Laetitia.

Francis’s teaching in the form of approval of a local interpretation of a papal or conciliar document is atypical but not without precedent. Consider the exchange between Pius IX, Chancellor Otto von Bismarck, and the German bishops in 1875 during the Kulturkampf (“culture war”) waged by the German Reich against Catholics. When Bismarck accused Prussian bishops of having become “branch managers” of the pope after the Vatican I declaration of papal primacy, the bishops responded with a defense of their episcopal function, with Pius IX confirming their interpretation of papal primacy. This exchange is a key part in the interpretive history of Vatican I; it was printed in the famous collection of Church teaching, the Denzinger, and was also cited in the footnotes of Lumen Gentium, supporting a crucial chapter on the papacy and episcopal collegiality. In other words, the exchange has become integral part of the Catholic tradition. As paradoxical as it may sound, over these last one hundred and fifty years, the path of decentralization of the Catholic Church also went through Vatican I, the epitome of ultramontanism and of the “Romanization” of Catholicism.

One of the differences between 1875 and today is that the Kulturkampf is now inside the Catholic Church. The “dubia” against Amoris Laetitia and the campaign by some Catholic media to delegitimize this pope are pretty much without precedent in the history of the modern papacy. But this has not stopped Francis. Now, having lost the ecclesial battle (at the Synod) and theological battle (the belief that Amoris Laetitia is not Catholic teaching is limited to a very small number of Catholic circles), the anti-Francis fringes are targeting Amoris Laetitia more from a juridical and canonical point of view. They contend that the letter published in Acta Apostolicae Sedis, in its present form, does not change the Code of Canon Law, canon 915: “Those who have been excommunicated or interdicted after the imposition or declaration of the penalty and others obstinately persevering in manifest grave sin are not to be admitted to holy communion.”

Canon law is clearly an important part of the Catholic tradition, and the curricula of Catholic theologians should include more of it—as I said recently in my lecture to the annual convention of the Canon Law Society of America. But aside from the fact that for Catholics what the pope teaches about Communion is more relevant than what canon 915 says, there are two historical factors that even a strictly juridical criticism of Francis’s decision should take into account.

First: there are many ways in the Catholic Church to change or abrogate a law. One of them is silent abrogation because a particular law has fallen into disuse (desuetudo); a law that for a long time has not been respected or enforced is no longer a law. It is a fact that in many parts of the world, for quite some time, Catholic clergy have not enforced canon 915 in application to communion for divorced and remarried Catholics. From my personal experience, the focus on canon 915 in the U.S. Catholic Church is an exception. Bishops in the United States and around the world have known this since long before the election of Francis, who is now making space for Catholic practices that deserve to be recognized—not simply because they are “innovative,” but because of a pastoral intent that gets the practice of the Church closer to its mission and to the Gospel. The real issue is that there is and will be probably a situation in which the issue of allowing, in some circumstances, remarried divorcees to receive communion will receive different treatments in different parts of the world—even perhaps depending on the particular country, or diocese, or area of the diocese.