‘A Man Without Cattle Is Lost’ 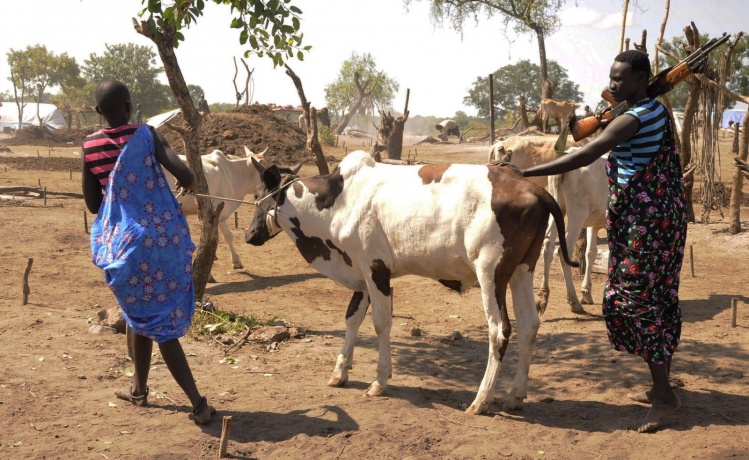 Returning from the sparsely populated Karamoja region of northeast Uganda to the capital city of Kampala, some Ugandan colleagues and I passed an inconspicuous intersection. One pointed to a road headed north. “That’s the way to Juba,” he said, smiling, referring to the capital of South Sudan.

My colleagues had heard me talk of my experiences a few months earlier in South Sudan. In many respects, Karamoja and South Sudan are studies in contrasts. Karamoja is at peace; South Sudan is at war. Karamoja has until recently been largely ignored by government bodies and international humanitarian groups, while South Sudan has been the recipient of large amounts of international largesse -- not to mention good will -- in the hopes that the narrative about the world’s newest nation will have a happy ending. (South Sudan became an independent state in 2011 following a decades-long civil war with Sudan that is believed to have killed more than two million people.)

So far South Sudan’s happy ending hasn’t materialized. Warring factions headed by President Salva Kiir and his former vice president, Riek Machar, have yet to settle their differences. Several peace agreements have yet to stem political (and now ethnic) tensions and a spiraling humanitarian crisis. Perhaps as many as one million South Sudanese have been displaced by violence, and worries of possible famine continue as the year goes on.

There may be some security concerns in the small Karamoja community of Kotido, which has few amenities and feels like a quiet, dusty outpost that time forgot. But overall, the atmosphere seems calm. By contrast, even after things had settled down in Juba following the worst months of violence in December and January, the capital city still felt jittery and on edge.

And yet there are connections between South Sudan and Karamoja, beginning with the border they share. For a time, concern that the crisis could spill over into Uganda was great enough that Uganda sent troops to assist South Sudan government forces; more than one person in South Sudan told me if not for that, Juba and the government would have collapsed.

And, of course, poverty is a common feature. Humanitarian indexes for both South Sudan and Karamoja are among the lowest in the world. And with political leaders willing to exploit populist fears or ethnic tensions, Karamoja seemed like a place that could tip in a direction like South Sudan’s—never mind the persistent threats of drought and famine.

Drought is not as crippling in Karamoja this year as in the past, and though there has been nothing like the tragic famine of 1980, there is hunger. In all of the villages I visited during my humanitarian reporting assignment in Uganda, people said there was not enough to eat. A May report from the World Food Program supported this, noting that the food security situation–access to and availability of--has worsened in the last year. “While not an emergency, the situation can be termed as serious.” Nearly two-thirds of the population is “stressed” over food (eating what is minimally adequate) and nearly two out of ten people are facing some kind of food crisis.

The fragility of the economy does not help. It is one that is based on cattle, just as life is, and that life has never been easy. And therein lies perhaps another connection between Karamoja and South Sudan.

IT CAN BE HARD TO CONVEY to those who haven’t witnessed it the complexity of life where cattle reign. Throughout East Africa, disputes between villages and conflicts among ethnic groups have long and often involved cattle, with theft and banditry common. The agro-pastoralists of Karamoja grow crops on small plots to supplement earnings, but cattle is still king: The region once accounted for a quarter of all the cattle in Uganda, and though the market is now more commercialized and the number of cattle down, it is still believed to be substantial.

Villagers I spoke to generally saw the good in both crops and cattle– though some were quick to add that a “man without cattle is lost.” Cattle is a part of the lived, day-to-day reality of the Karamoja people, a notion reiterated by Ambrose Dbins Toolit, a Ugandan agricultural specialist with the Danish humanitarian agency Dan Church Aid. He’s critical of a government food security initiative that has emphasized crops over cattle, suggesting that it’s at least partially to blame for the “continued insecurity” of a region that the Small Arms Survey, a Geneva-based research project, traces to Karamoja’s “peripheral status” in terms of infrastructure and economic development. Lochap Paul, the director of Caritas operations in the Catholic diocese of Kotido, said that with the problems caused by climate change, cattle remains attractive “because you can shift to another area.” Mobility is harder, he said, when you become more fully dependent on farming and crops.

But with cattle come theft and banditry, often with young men at the vanguard. Not so long ago, Karamoja was so awash in guns and violence that the Small Arms Survey in 2008 characterized the region an “exemplar of Africa’s pastoral wars.” Young men I spoke to who’d once been thieves and bandits spoke of the dangers of such a life. “When you go out on raids, they kill you,” said Logwang Ekolipus, who lives in village of Nasinyon in the Kacheri sub-country of Karamoja. Akol Apamagal, who lives in the village of Nasiriamoru, said he had been involved with raids for the sake of his family’s livelihood, but that it had proven to be an increasingly risky way to make a living. “It hasn’t helped my family,” he said, adding that “anything is better than raiding.” But he, like many others who’ve abandoned raiding, has yet to find employment. “There aren’t jobs,” Apamagal said.

Ekolipus said that if communities in Karamoja want to move forward, like his is trying to, they have to fashion new ways of developing income and livelihoods. In Uganda, that’s a steep challenge, yet at many levels the effort is at least being made. To a large degree that isn’t happening in South Sudan. Cattle theft and banditry by teen-age boys and young men in rural areas have undergirded the formation of South Sudan’s rebel White Army (so named because the males smeared their bodies with light ash to protect themselves from insect bites), which was responsible for much of the violence in cities like Malakal late last year and early this year.

Nearly everyone I interviewed in Juba in late March and early April spoke of the need for concrete efforts by the government and others to provide schooling and some purpose for young men stuck in lives centered on banditry and theft, murder and rape. Noting the extremely low levels of education, Lorraine Bramwell, the country director for Catholic Relief Services in South Sudan, told me that the youths who have been fighting in rebel groups are so isolated they “have probably never even been to the capital of their home states.” More to the point, they have not had anyone on whom to model lives, on something more hopeful and affirming. “These young men in the fighting have nothing to lose and no idea of how to make their lives better,” she said. “To imagine a better life, you have to see it. You have to be exposed to it.”

Chris Herlinger is senior writer for the humanitarian agency Church World Service and a contributing writer to National Catholic Reporter and its Global Sisters Report.