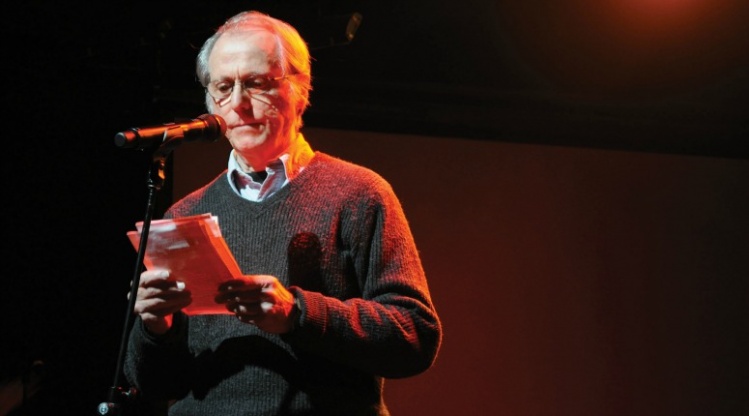 The husband and wife at the center of Don DeLillo’s 1985 novel White Noise both flirt and despair over the question of who will predecease the other. Why do we have to die? is the existential plaint behind not only their pillow talk and estate planning but also the narrative itself, which proceeds less as conventionally plotted drama than as darkly comic, special ongoing coverage of the ever-approaching encounter with life’s end. Flash ahead to DeLillo’s latest, Zero K, and the question is: But must we die at all? The ageless query has become an expression of entitled consumerism, disburdened of inconvenient philosophical or theological confusions. Maybe it’s no coincidence there’s not as much to laugh about either.

DeLillo has long been celebrated for his prescience, his ability to somehow capture a world that’s about to arrive in fiction that may be steeped, if not always set, in the past. He accomplished this most deftly in 1988’s Libra, engaging conspiracy theories about the Kennedy assassination and amassing troves of biographical data on Lee Harvey Oswald to comment on the futility of seeking “truth” in images, and on our vulnerability to paranoia in trying to make sense of senseless events. He exhibited it most grandly in Underworld, a novel huge in scope and page count, spanning decades and locales; nuclear cataclysm is its primary theme, though pandemic, environmental degradation, and economic collapse also make ominous appearances. These creeping terrors inspired an original jacket design showing the towers of the World Trade Center, upper floors obscured by a smoky fog, with the black, aircraft-shaped silhouette of a spread-winged bird swooping in from the top corner and the cross of a Catholic church in the foreground—this a full four years before 9/11.

Zero K dwells less on the post-war, premillenial anxieties that gave those earlier works their particular unsettling charge. It seems less historical, more futuristic, yet it’s set in a worrisomely recognizable present. Limited in cast, modest in length, and intimate in point of view, it’s in keeping with similarly contained work of later-career DeLillo, such as Cosmopolis. Typical of his fiction, though, it offers few of the narrative, thematic, or aesthetic comforts that readers might ordinarily seek. The jarring plausibility of the central idea—“Life everlasting belongs to those of breathtaking wealth.... It’s no longer a teasing whisper you hear in your sleep”—is taken up in jarring, occasionally jargony language and chilly, jagged interactions among sometimes frustratingly oracular characters. Yet this may be the point: What other mode might possibly suit the material?

Zero K’s first-person protagonist and reluctant conscience is Jeffrey Lockhart, who early on learns that his terminally ill stepmother, with the emotional and financial support of his billionaire businessman father, will have herself put into “cryonic suspension” before she dies. (The book’s title refers to absolute zero degrees Kelvin, the temperature at which atoms stop moving.) It is the couple’s certainty that a cure will someday be discovered, at which point she can be reanimated and live on—perhaps forever, not only having survived her illness but also having slept safely through all the calamities sure to have beset civilization in the meantime. “Faith-based technology,” Jeffrey’s father, Ross, explains. “Another god. Not so different, it turns out, from some of the earlier ones. Except that it’s real.”

Jeffrey is troubled from the outset, when he is summoned by Ross to the secret facility, apparently somewhere in remote Kyrgyzstan, where the procedure—grandly dubbed by its creators as the Convergence—is performed. He arrives after a long flight to find it is largely funded by Ross’s billions; staffed with scientists, spokespeople, and armed security; and already serving a select (wealthy) clientele. Much of the action, such as it is, consists of elliptical debates about death, money, and business between Jeffrey and Ross (or Jeffrey and mysterious unnamed personnel); exploration of the windowless, mostly subterranean site; and recollections of his own upbringing—all as his stepmother prepares to enter her suspended state. It is in this long opening section that DeLillo presents the inversion from which Zero K will draw its tension. No Catholic, Jeffrey says of himself, he once nonetheless went into a church on Ash Wednesday and got “a splotch of holy ash thumb-printed to my forehead. Dust thou art.... And to dust thou shalt return.” This memory stands in notable opposition to his father’s characterization of the physical structure of the facility and the principle undergirding the Convergence: “Return to the earth, emerge from the earth.”

Even if Jeffrey had the tendency or vocabulary to talk in terms of heresy, it’s unlikely he would, as DeLillo seems not to want to hark back to those “earlier” gods but rather tilt his book toward the future made possible by our technophilic age. When one of the mysterious, nameless Convergence officials challenges him with the obvious if rhetorical question—“What is the point of living if we don’t die at the end?”—Jeffrey doesn’t rush to take it up. He seems more like an emissary from a simpler place, or at least from a place where unending biological life is not so readily, frighteningly purchasable. Back in New York after his stepmother has entered cryonic suspension, he spends time in long walks with his girlfriend, one foot in front of the other, in firm contact with the earth beneath him. “Know the moment,” he thinks, “feel the gliding hand, gather all the forgettable fragments, fresh towels on the racks, nice new bar of soap, clean sheets on the bed.... This was all I needed to take me day to day and I tried to think of these days as the hushed countermand, ours, to the widespread belief that the future, everybody’s, will be worse than the past.”

Lurking beneath the main concerns of Zero K is a story of filial conflict, but moving portrayals of interpersonal relationships are not exactly DeLillo’s thing. The critic James Wood long ago castigated him for sacrificing people to conspiracy and paranoia. Character, Wood complained, can’t take form when a narrative moves outward toward chaos rather than inward toward stability. But do people really come to DeLillo for character anyway? It’s his special brand of angst, and his artful melding of language to subject, that attract fans. Still, Jeffrey—scion of wealth, irreligious, ambivalent in his relationships, uninterested in a career—emerges as an emotionally complicated, even hopeful, voice of reason. Witnessing the twice-yearly natural phenomenon in which the western sun’s rays align with Manhattan’s street grid, Jeffrey is moved by the response of a boy next to him, “whose howls of awe” express “the purest astonishment in the intimate touch of earth and sun.” Might this, in addition to reflecting Jeffrey’s own understanding of life’s depths and limits, also signal the author’s later-in-life arranging of things? If so, there are worse places to arrive at. Let the 0.1 percent pay to live forever; the rest of us know why to invest in a sunset.