‘You Shall not Wrong a Stranger’ 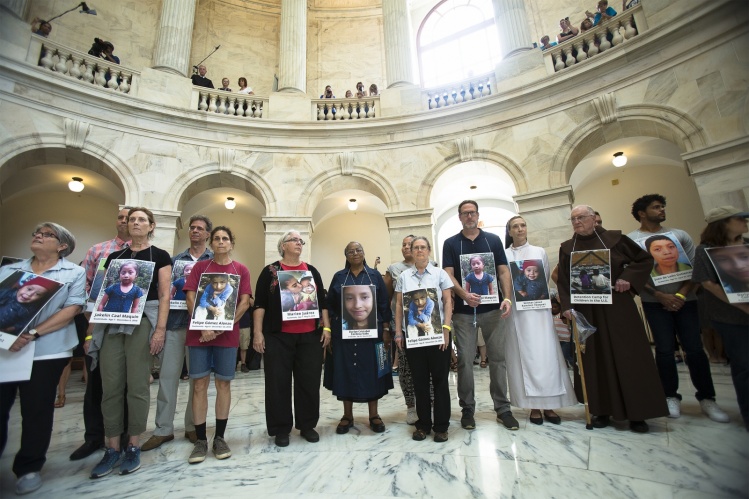 In these mean and ghastly times, we have to seek grace wherever we can find it. I found it last week in two groups, one of nuns and the other of Jewish activists, both willing to be arrested as witnesses on behalf of immigrant and refugee children being abused by our own government.

It’s troubling these days if you’re a Christian to see what is being said and done by many Christians in the name of their faith. After all, the founder of the tradition was rather direct in telling us how we are supposed to treat people different from ourselves, people in trouble, people who journeyed into a new land.

The Hebrew Bible is very clear on these matters, too. Thus Exodus 22:21: “You shall not wrong a stranger or oppress him, for you were strangers in the land of Egypt.”

What are those who take scripture seriously to do in the face of the Trump administration’s willful mistreatment of children and families? If you are part of a group of Catholic nuns and their allies in Washington D.C., you sit-in at the Capitol, lie down and form a human cross.

And before Donald Trump sends a nasty tweet claiming there is something un-American here, let’s note that these conscientious objectors were operating in our country’s revered tradition of using nonviolent civil disobedience to say no to oppression.

“It’s important to go beyond words, to put your body where your words are, where your beliefs are,” Sister Marge Clark told The Washington Post’s Marissa Lang.

“The gospel compels us to act,” Sister Ann Scholz of the Leadership Conference of Women Religious told the crowd. “We are outraged at the horrific treatment of families and especially children. The inhumane treatment of children being done in our name must stop.”

The Exodus story has always provided inspiration for liberation movements, and it is singularly appropriate to our moment.
sharetweet

Among the seventy arrested on Thursday was my friend John Gehring, a Catholic writer who was in custody for about four hours and, in the spirit of charity, praised the Capitol Police for their respectful handling of the demonstrators. “They obviously don’t feel good about putting handcuffs on eighty-year-old nuns,” he said.

This is a difficult hour for religion, particularly for those evangelical Christians horrified at how many in their ranks have rallied to Trump—my Washington Post colleague Michael Gerson has written eloquently on this. It’s also tough for Catholics (I’m one) struggling not only with pro-Trump sentiments among many of the faithful but also the bitter aftermath of the abuse scandal.

“It’s been a dark time for our church,” Gehring said. “But when you stand next to a ninety-year-old nun with handcuffs and a rosary around her wrists, it gives you hope. When I get down, Catholic nuns lift me up.”

Christians were not alone in taking a stand against barbarism. Two days earlier, ten demonstrators, among them a group of progressive Jews, were arrested at an interfaith sit-in at the Immigration and Customs Enforcement headquarters. Among those gathered was Rabbi Arthur Waskow, 85, a brilliantly dissenting theological voice and veteran campaigner for civil rights and social justice. Waskow’s shirt, Lang reported, bore the message: “Resisting tyrants since Pharaoh.”

Yes, the Exodus story has always provided inspiration for liberation movements, and it is singularly appropriate to our moment. Those who preach from Exodus, and from Matthew, Isaiah and Amos, give the lie to the idea that religious faith is inevitably conformist, reactionary or inclined toward worship of those in power.

We see many examples of religion’s misuse today, of course. Few are more disturbing than the manipulation of spiritual sentiment on behalf of a leader who could not be more at odds with a gospel of love or the words of prophets who demanded that we let justice roll down like water.

So let’s give thanks for a blessing that interrupted news cycle after news cycle dominated by a president’s racism, and chants calling for a congresswoman who was herself a refugee to be sent away. These women of faith, many in the winter of their lives, went beyond words to invoke a God of love who will judge us by how we treat strangers and children.