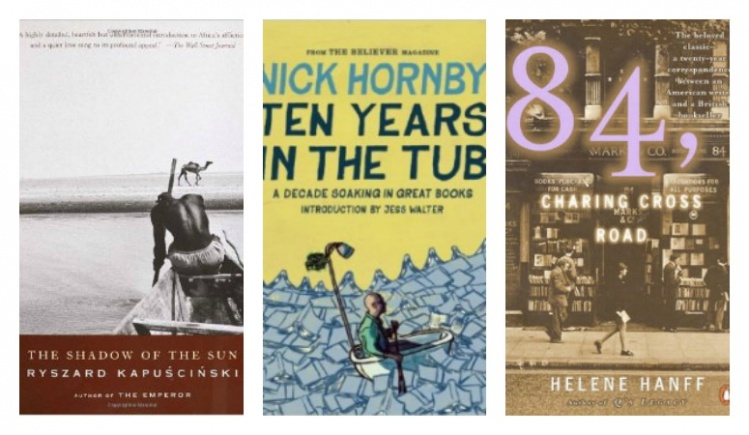 "I don’t want anyone writing in to point out that I spend too much money on books, many of which I will never read. I know that already. I certainly intend to read all of them, more or less,” says the novelist Nick Hornby. It’s an unusual start to a book review, but Hornby is not your usual book reviewer.

Ten Years in the Tub (McSweeney’s, $20, 464 pp.) follows ten years in Hornby’s reading life through his monthly book reviews in the Believer magazine. For a collection of reviews, Ten Years has a strong underlying narrative. From his very first column, Hornby’s goal is to write about the “how, and when, and why, and what of reading—about the way that, when reading is going well, one book leads to...a paper trail of theme and meaning.”

Of course, Hornby’s reading does not always go so smoothly. Each month he tallies his “Books Bought” with his “Books Read,” sometimes speeding through eleven books in a month, sometimes managing only two or three (an aberration Hornby blames, depending on the season, on either London’s Arsenal Football Club or the TV drama Friday Night Lights). One month a “lost Victorian classic” by Wilkie Collins is a hopeful entry under “Books Bought.” The next month, Hornby confesses, “We fought, Wilkie Collins and I. We fought bitterly and with all our might, to a standstill.”

But sometimes standstills are okay. Over ten years, as the books read and unread pile up, Hornby realizes that “all the books we own, both read and unread, are the fullest expression of self we have at our disposal.... With each whimsical purchase, our libraries become more and more able to articulate who we are, whether we read the books or not.” Hornby has granted book lovers the perfect excuse to buy more books, and Ten Years is worth buying—even if you don’t finish it.

In 1958, a Polish journalist named Ryszard Kapuscinski traveled to Africa for the first time. As he stepped off the plane from cold, dreary Europe, Kapuscinski was stunned by his surroundings, “struck by the light” and by the smells “of a sweating body and drying fish, of spoiling meat and roasting cassava, of fresh flowers and putrid algae.”

Over the next forty years, Kapuscinski visited the continent as often as he could. He would survive malaria and tuberculosis; meet dictators and nomads; and witness twenty-seven revolutions and coups. In his account of his travels, The Shadow of the Sun (Vintage International, $16, 336 pp.), Kapuscinski admits he cannot describe the entire continent. “It is a veritable ocean, a separate planet, a varied, immensely rich cosmos,” he writes. Instead, Kapuscinski focuses on the people he meets. He avoids official protocol, shunning palaces and politicians to live with peasants on a savannah or hitch rides with nomads. To the horror of other European expats, he lives for a time in a Lagos slum. “How else can I get to know this city? This continent?” he asks.

The Shadow of the Sun toes the fine line between fact and fiction, a boundary Kapuscinski challenged throughout his career. He described his writing as “literary reportage” and claimed to keep two notebooks, one with notes for his newspaper stories and one with literary descriptions. After Kapuscinski’s death, his biographer Artur Domoslawski claimed that Kapuscinski invented stories and passed them off as factual reporting. As Domoslawski told the Guardian, “Sometimes the literary idea conquered him.”

But as Kapuscinski would have replied, “How else can I get to know this continent?” What he may lose in factual credibility, he gains in truth. Writing The Shadow of the Sun as journalism interwoven with metaphor allows Kapuscinski’s reader to follow his example and “enter other ways of looking, perceiving, describing.”

Like Hornby, Helene Hanff loves English literature. Unlike Hornby, she was broke. “I am a poor writer with an antiquarian taste in books and all the things I want are impossible to get,” the struggling New York screenwriter writes in her first letter to a London bookshop, Marks & Co, in 1949.

84, Charing Cross Road (Penguin Books, $14, 112 pp.) is a collection of the twenty-year correspondence between Hanff and a Marks & Co. bookseller, Frank Doel. Often no longer than a page, their letters evoke the post–World War II world in rich detail. Without ever leaving her brownstone on the Upper East Side, Hanff comes to understand England better than most people who travel there. Along with Jane Austen novels (“P-and-P arrived looking exactly as Jane ought to look, soft leather, slim, and impeccable”) and Elizabethan poetry (“I shall try very hard not to get gin and ashes all over it, it’s really much too fine for the likes of me”), Hanff and Doel exchange much-needed food parcels, recipes for Yorkshire pudding, and news of two countries that seem as foreign to each other as the world in Hanff’s antiquarian books might seem to us.

It’s also a world where transatlantic travel doesn’t happen as effortlessly as today. Over the years, Hanff is caught between reading about England, her favorite place, and summoning the courage (and money) to visit. It’s a nuance that perhaps Hornby and Kapuscinski would have recognized: Can literature ever be a real substitute for seeing and knowing a different people and place? “A newspaper man I know...says tourists go to England with preconceived notions, so they always find exactly what they go looking for,” says Hanff. “I told him I’d go looking for the England of English literature, and he said: ‘Then it’s there.’” There’s something reassuring in her conclusion.