‘The Ministry of Utmost Happiness’
By Randy Boyagoda
Books 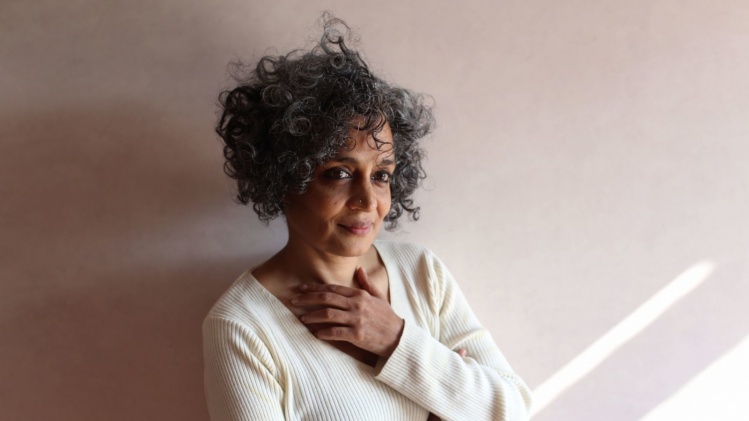 “At the magic hour, when the sun has gone but the light has not, armies of flying foxes unhinge themselves from the Banyan trees in the old graveyard and drift across the city like smoke. When the bats leave, the crows come home. Not all the din of their homecoming fills the silence left by the sparrows that have gone missing, and the old white-backed vultures, custodians of the dead for more than a hundred million years…” Mystical, romantic, timeless, transporting—here we go again. Western readers consume South Asian literary fiction like butter chicken at a lunch buffet, keen to enjoy rich and steamy evocations of distant places and people whose private and public tribulations tend to be wrapped up, if not suffocated, in a great deal of exotic gauze. This makes for a perfectly guilty reading pleasure: we can both develop feelings of solidarity and empathy with those living in extreme poverty, and enjoy some tasty descriptions of curry.

Arundhati Roy’s fiction doesn’t so easily inspire menu options for Book Club meetings. On the opening page of her new novel, The Ministry of Utmost Happiness, we learn that after a hundred million years, these white-backed vultures “have been wiped out”:

The vultures died of diclofenac poisoning. Diclofenac, cow aspirin, given to cattle as a muscle relaxant, to ease pain and increase the production of milk, worked—works —like nerve gas on white-backed vultures.... As cattle turned into better dairy machines, as the city ate more ice cream…as it drank more mango milkshake, vultures’ necks began to droop...and one by one they tumbled off their branches, dead.

Roy’s greatness as a writer resides in the poise and ease with which she introduces a jarring term like diclofenac into the novel, and not simply in contrasting juxtaposition with mango milkshakes. Rather, she lyrically reveals a causal relation between large-scale bird poisoning and these sweet treats, before caustically assuring us at the end of this opening not to worry too much about this happy, heedless consumption. After all, when it comes to South Asian fiction, “There was so much else to look forward to”—for both the characters and the reader.

That’s certainly the case with Roy’s new novel, if not in ways that invite straightforwardly positive comparisons with its predecessor, The God of Small Things. That book was published to prizes, praise, and bestseller status, twenty years ago. The long gap between Roy’s first and second novels reminds one of Marilynn Robinson’s career. There was a twenty-four-year period between Robinson’s much-beloved Housekeeping and the acclaimed Gilead. While admiring readers lamented the pause in their writing fiction, both Roy and Robinson meanwhile published other kinds of work that attested to concerns and commitments beyond their literary achievements, significant as these are. Since the publication of Roy’s first novel, she has written books about India’s emergence as a nuclear power, the persistence of its caste system, the political currency of sectarian division and violence, the extreme contradictions of India’s opening to globalized capitalism alongside its continued disenfranchisement of the poor and politically marginalized, and, not unrelatedly, the armed resistance to the state organized by Marxist-Naxalite rebels in central India. Roy’s gifts as a storyteller and as an evocative, pointedly observant writer inform her searing nonfiction but never govern it. Likewise, she has clearly drawn on the information and insights she’s gained from these books in developing the various storylines of her new novel. There is, for instance, a section about Naxalite rebels that immediately recalls Walking with the Comrades, Roy’s 2011 in situ study of the movement.

The long gap between Roy’s first and second novels reminds one of Marilynn Robinson’s career.
sharetweet

To understand the success of her new novel, one has to consider the way Roy manages its literary and political and ethical imperatives. This wasn’t as much of an issue with The God of Small Things, in which the literary, the political, and the ethical were fully integrated. That novel took as its point of departure and return the death of a young Indo-English girl visiting her family in India in the late 1960s. Around this tragic event a profound fracturing takes place over a matter of days and across decades, involving the members of a large elite family and the assorted members of the local poor community they both depend upon and sustain.

The Ministry of Utmost Happiness introduces numerous storylines and plots that frequently intersect without being as clearly integrated. I don’t think this is a failure on Roy’s part: the lack of clarity is crucial to the larger meanings of the novel. Right from the start, ambiguity is one of its themes. The book begins in Delhi with the birth of Anjum, whose parents are joyful to have a son after having three daughters. But they soon discover “nestling underneath his boy-parts, a small, unformed, but undoubtedly girl-part.” Anjum’s parents experience alarm, confusion, and disappointment while practising public denial, but soon enough Anjum’s love of song and playfully feminine ways lead to ridicule, isolation, and then to the discovery of an affirming community of Hijra. These transgender women have a courtesan-like reputation among Delhi elites, as part of a tradition that goes back centuries. Anjum joins the community and soon becomes its most famous member, but she later comes into conflict with her fellow Hijra and leaves the house they share to live in a graveyard where “clots of homeless people sat around fires cooking their meager, smoky meals.”

Initially threatened, Anjum wins over the living residents of the place with her charisma and strong will, and she ensures that the policemen who sometimes visit are well fed. Soon the graveyard becomes a gathering place for anyone at odds with the bold and ambitious “New India—a nuclear power and an emerging destination for international finance.” This coming together leads to extensive backstories for many of the characters, including, for instance, a young man who calls himself Saddam Hussein (he chooses the name in an act of idiosyncratic identification with the Iraqi dictator). Saddam has taken part in everything from mob violence to mortuary work to guarding an art installation, a “stainless-steel Banyan tree” imported to Delhi from New York. This last job—which gives Roy a chance to offer a swift double critique of the West’s extreme appetite for the exotic and elite India’s willingness to satisfy it—requires Saddam to keep the steel art perfectly polished under the endless Indian sunshine, an effort that leaves his eyes singed and requires him to wear sunglasses at all times. Later in the novel, as we learn more about Saddam’s past, we discover that the sunglasses conceal evidence of just how emotionally and psychologically shattered he is.

Saddam and other characters’ relationships to Anjum and their involvement with her graveyard community affirm her and this place as a kind of center for the novel. But these are balanced by events surrounding the discovery and kidnapping of an abandoned baby in the middle of a chaotic political demonstration (there seems to be no other kind in Roy’s India). The baby’s predicament becomes a focal point and source of potential unity and hope, especially in light of Anjum’s intense but frustrated desire to mother the kidnapped child. The narrator announces that “the baby was the beginning of something.” Yes, a life—but what kind of a life? Each new revelation about the child, her origins, and her first adoptive parent introduces more complications and concealments, primarily concerning characters caught up in the ongoing conflict in Kashmir or the Naxalite rebellion. The complications involve romantic and family relationships, as well as friendships. There is betrayal, sacrifice, and brutal violence, including casual murder and gang-rape. The subplots are harrowing and moving, but it is tempting to treat them as indulgent longeurs and undisciplined convolutions, because we want to get back to the seeming center of the story—Anjum and the baby.

Roy finally gestures toward a small loving unity forged between Anjum and the baby. She also hints at a more promising future, at least for the baby. But by then the reader’s desire for this kind of unity and this kind of future has been sorely tested by the preceding pages, which constantly challenge our expectations about what any serious novel owes us. As a character with literary ambitions observes, while surveying the situation around him in Kashmir, “There’s too much blood for good literature.”

But this is always true, and good literature keeps coming. The Ministry of Utmost Happiness both rejects the sublimation of suffering into art, and accomplishes it in a way that is both messy and lyrical, diffusive but unity-seeking. It would make for bad Book Club reading, and I think Roy would have it no other way.