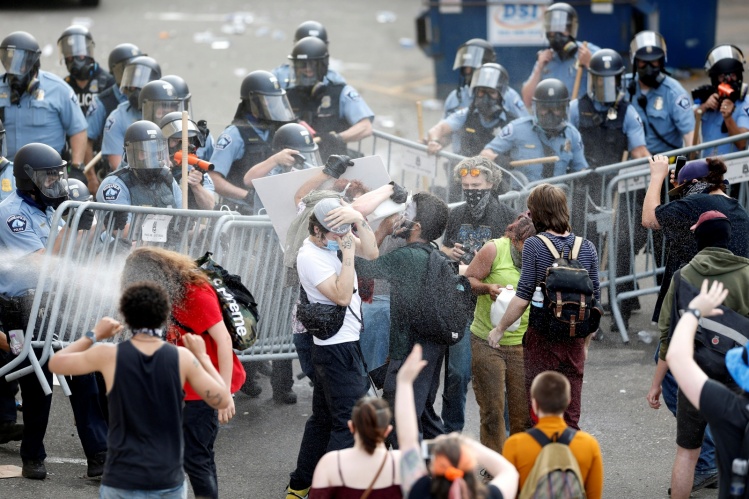 Police in Minneapolis spray mace at protesters to break up a gathering near the Minneapolis Police Third Precinct May 27, 2020 (CNS Photo/Eric Miller, Reuters)

On June 3, on his satellite radio show Conversation with Cardinal Dolan, the archbishop of New York addressed the Black Lives Matter protests that followed the May 26 death of George Floyd. He said the violence that had broken out in some cities left him at a loss. “It just seems mindless and destructive,” he told his co-host, Fr. Dave Dwyer, CSP. “But there are certain things we can say. First of all, the action against Mr. Floyd in Minneapolis was vicious. It needs to be condemned. It needs to be investigated. It needs to be tagged for what it is: a miscarriage of justice. Secondly, we need to say that our police officers are tremendous people.” Dolan heaped praise on police officers for their commitment to defending human life and dignity, insisting, “They cannot be caricatured because of the action of one member.”

Dolan went on to characterize protestors in similarly glowing terms, even reporting that New York City police officers have told him, “Most of the demonstrators are thoughtful, they love this country, they’re calling us back to everything that is good and decent and just and honorable.” The cardinal was plainly trying not to take sides, or to portray what was happening as a conflict that required taking sides. Minimizing tension and emphasizing common ground is a decent impulse, and often an effective path to compromise. But it falls far short of promoting justice.

It’s easy to see why bishops and pastors would focus on the hurt feelings of police officers. Cops are a highly visible part of the Catholic population, especially in places like New York City and its suburbs. Dolan undoubtedly knows many police he considers worthy of respect. But as a spiritual leader, he owes more to cops than comforting words. “Don’t let it get you down” is not what they most need to hear. Meanwhile, black people and their allies are taking to the streets to protest police brutality and lack of accountability for abusing the rights of people of color. It is accurate to say that George Floyd’s murder is a “miscarriage of justice,” but justice cannot be served by pretending that what happened to Floyd was due only to the personal depravity of the man who killed him. That man was a law enforcement officer in good standing despite a string of complaints against him, actively training younger officers when the killing took place. He acted out of well-founded confidence that he was entitled to use as much force as he pleased to subdue a black man, regardless of the consequences for that man. The injustice laid bare in that footage of an officer crushing the life out of George Floyd while his colleagues stand by is not resolved simply by punishing that one officer. And when people are rising up to demand greater accountability, mounting a defense of the good guys—hashtag-not-all-cops—is just changing the subject.

When people are rising up to demand greater accountability, mounting a defense of the good guys—hashtag-not-all-cops—is just changing the subject.
sharetweet

An incident on June 4 in Buffalo, NY, illustrates well what is at stake. Cops in riot gear who were clearing protestors out of a public space advanced on a white-haired man, held up their batons, and knocked him to the ground. The man’s head hit the pavement and he began to bleed from his ear. The Buffalo Police Department released a statement saying that the man “tripped & fell,” but cellphone footage of the police shoving him had already blown up on social media. Caught in the lie, the department suspended two cops—provoking an outcry from their police union, who called the suspensions “a politically motivated witchhunt” targeting officers “who were simply executing orders.”

This story complicates the most-cops-are-heroes defense. The conflict between the video footage and the official police department statement, and the show of defiance from the police union, demonstrates that the idea of a few “bad cops” tarnishing the image of the noble majority is itself a caricature. And yet it isn’t hard to understand those officers’ consternation. Their orders—by their own account—told them to go to that plaza and clear it, not to make sure no demonstrators got hurt. Now two officers have been punished for following through on those orders. What is a good cop supposed to do?

A good cop, or rather a good person who happened to be a cop, could look at that contradiction and recognize that the orders are the problem. He or she might consider that carrying out the state’s use of force against civilians, and then lying to the public about the consequences, is in conflict with the ideals of public service as well as belief in the dignity of all human life. That good person might turn around and join the protestors, perhaps holding a sign that says, “Police Should Protect, Not Oppress.” But doing so would require humility and a great deal of courage. Religious leaders are in a position to encourage that kind of moral heroism, if they so choose. But the work of justice cannot depend on waiting around for them to succeed.

Real justice for George Floyd and everyone like him requires rethinking what police do, and how we—all people, but especially white people—empower them to do it. It requires creating a system of oversight that doesn’t rely entirely on the decency of individual cops. Insisting on such far-reaching changes is sure to offend police officers, including Catholic ones. We still have to do it. The alternative is to carry on ignoring the much greater pain of the vulnerable, disenfranchised, oppressed populations that both law enforcement and church are supposed to serve. Every Catholic bishop should be willing to take a side, to say without qualification, “Black lives matter,” not just because it’s true, but because that’s what needs to be said now.