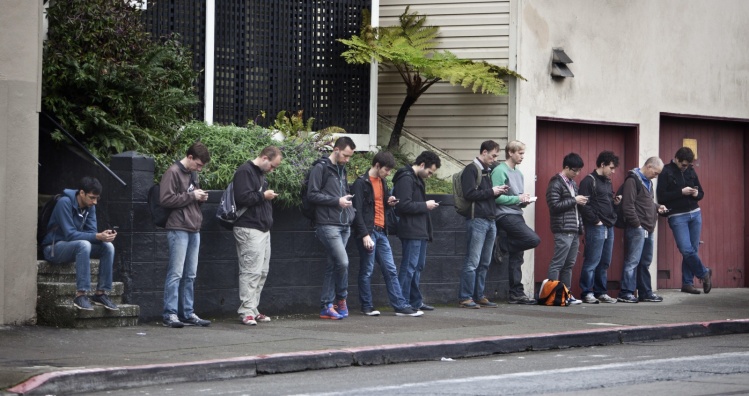 Tech workers in San Francisco check their cellphones as they wait for a bus to take them to Silicon Valley. Many tech companies run buses from the city to the company campuses (UPI/Terry Schmitt/Alamy Stock Photo).

When I moved into my first apartment, I unpacked boxes and built a lot of sand-colored Ikea furniture. What I did not do was set up WiFi. Call it a failure to adult or just laziness, but for ten months, I never bothered to call the local internet provider and schedule a time to install a router—a process that, when the pandemic hit and I ran out of excuses, took all of an hour. This was no virtuous tech fast; I really like watching Netflix and Instagram doomscrolling (preferably at the same time). I just didn’t have enough motivation to get it done.

A similar “errand paralysis” provides the jumping-off point for journalist Anne Helen Petersen’s book-length expansion of her viral BuzzFeed article, Can’t Even: How Millennials Became the Burnout Generation (Houghton Mifflin Harcourt, 304 pp., $26). After a series of intense, back-to-back reporting assignments, Petersen’s editor suggested that she might need a break from work. Petersen resisted the offer, even as she noticed that she felt “numb, impervious” and couldn’t finish any of the items on her to-do list: it “just kept recycling itself from one week to the next, a neat little stack of shame.”

She began to read online accounts of similar struggles, mostly written by fellow Millennials, even as she suspected the root of the problem was something deeper than just “adulting is hard” (a generational stereotype made infamous by everyone from Boomers to Gen Z). “Something wasn’t just wrong in my day-to-day,” she writes. “I couldn’t shake the feeling of precariousness—that all I’d worked for could just disappear—or reconcile it with an idea that had surrounded me since I was a child: that if I just worked hard enough, everything would pan out.”

Petersen is careful to note that burnout (first recognized as a psychological diagnosis of “physical or mental collapse as the result of overwork” in 1974) isn’t new or unique to Millennials, rooted as it is in the “melancholic world-weariness” described in Ecclesiastes and the exhaustion with “relentless change” that accompanied the Renaissance. But for Petersen, Millennial burnout is distinguished by structural and economic factors that mean “burnout isn’t just a temporary affliction. It’s our contemporary condition.” Millennials joined the workforce during the worst economic downturn since the Great Depression; we’re deeply in debt (an estimated $37,000 per debtor); and we live with a sense that to get into college, find “good” jobs, and maintain our value in society, we need to be, as Jia Tolentino puts it, “always optimizing.” Little wonder we’re so tired.

The individual threads of Petersen’s argument aren’t new: the self-imposed pressure to craft the perfectly imperfect Instagram post; accepting huge amounts of debt to finance our education; making ourselves available to our employers by Slack, email, or phone 24/7. But Can’t Even ties them together to offer a more comprehensive picture of how things got so bad. Though Petersen places the blame on capitalism and the myth of meritocracy, she stops short of offering policy fixes or life hacks as solutions to Millennials’ woes. What she offers instead is perhaps more valuable: an opportunity to question the “exacting, and often contradictory expectations” we too often unquestioningly hold ourselves to.

Uncanny Valley (MCD, 288 pp., $27), Anna Wiener’s memoir of working in Silicon Valley, reads like a dispatch from the frontlines of Petersen’s Millennial-burnout wars. A former sociology major living in Brooklyn, “oblivious to Silicon Valley, and contentedly so,” Wiener leaves her underpaid position as an assistant at a literary agency for a job at a glossy e-book startup in New York. She doesn’t last long—“I had trouble strategizing at scale”—but the experience catapults her into a series of customer-support jobs for tech startups in the Bay Area, “the promised land for millennial knowledge work.” Wiener’s narrative has a dreamy, unhurried quality to it, which makes her eye for telling details (the unofficial office mantra “Down for the Cause”) and her sharp social observations (her manager refuses her request for a raise by explaining “You’re doing this because you care”) all the more chilling.

One of Wiener’s jobs is with an unnamed data-analytics startup whose support team has access to a tool they call “God Mode,” which allows them to see the data their business customers collect on their own users. There’s an unspoken understanding that employees would never abuse this power to, say, research how well a hyper-valued new company is really doing. “Nobody ever used the words ‘insider trading,’” Wiener writes. “There was no policy on leaks.” After all, isn’t everyone down for the cause? When news breaks that the NSA is secretly monitoring phone and internet communications, Wiener finds that she’s already grown wary of sharing too much of her own data: “God Mode had made me paranoid. It wasn’t the act of data collection itself, to which I was already resigned. What gave me pause was the people who might see it on the other end—people like me.”

The problem with being down for the cause is that maintaining the fragile, porous boundary between your work self and your “actual self” becomes nearly impossible. Wiener’s memoir is, in the end, a coming-of-age tale (she was only twenty-five when she moved to San Francisco), and she delivers a prescient answer to the question of what happens when a generation raised by the internet must make a “real life” out of one lived almost entirely online. When Wiener quits her job in Silicon Valley, she experiences an awakening, but not a triumphant one. Though jaded by startup culture and wrung out by endless work, she had stuck with it for a reason. “I felt safer inside the empire,” she concludes. “It was preferable to be on the side that did the watching than on the side being watched.”

My ten months without WiFi were a very privileged form of inefficiency, a way of resisting the seductive appeal of technology that offers the illusion of control—if we can just work better, smarter, more, then maybe we can achieve something like happiness. Reading, though, is an equally inefficient act, one that can and should be available to everyone. Once a book is in your hands, there’s really no way to optimize the experience; it’s just yours for the taking.

I was reminded of this when I picked up A Month in the Country (NYRB Classics, 135 pp., $14.95) by J. L. Carr. At only 135 pages, it’s a short novel, but a deeply beautiful one. British World War I veteran Tom Birkin arrives in the village of Oxgodby, hired to restore a medieval mural in a church. As he slowly chips away at the accumulated layers of paint, he finds he’s also restoring himself. But even as Birkin begins to fall into the tranquil pattern of life in Oxgodby—Sunday dinners with the stationmaster’s family, conversations with the vicar’s elusive wife—an undercurrent of loss runs through his days. Face-to-face each day with the work of an unnamed artist who died suddenly “on the job,” Birkin feels most connected to the mural painter, “reaching from the dark to show me what he could do, saying to me as clear as any words, ‘If any part of me survives from time’s corruption, let it be this. For this was the sort of man I was.’”

Though it feels suspended in time, Birkin’s month in the country can’t last, and the book’s haunting end offers only an ambiguous sort of hope—a way of working and living where “the pulse of living beats strong.” Art matters. Community matters. The slow, laborious task of chipping away what’s in front of our own eyes matters. As Birkin says, “It is now or never; we must snatch at happiness as it flies.”