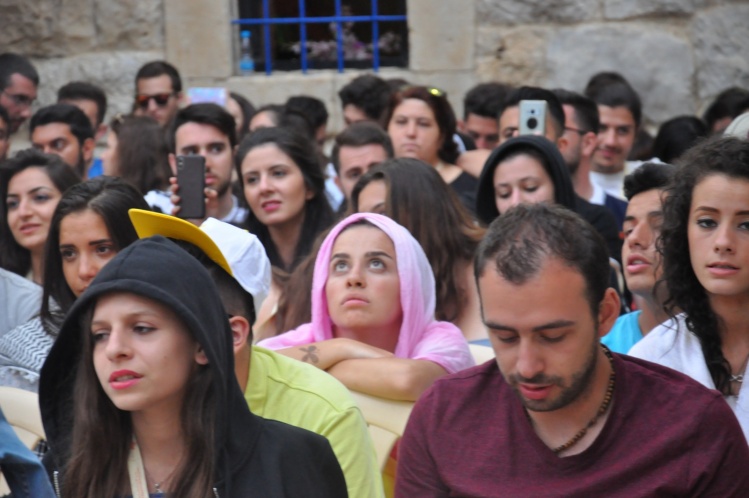 Young from around the world pray July 21 at St. Ephrem monastery in Chbanieh, Lebanon. The young people were in Lebanon for a July 17-22 gathering of Syriac Catholics. (CNS photo/courtesy Syriac Catholic patriarchate)

On April 8, the Vatican announced that Pope Francis had appointed a new commission to study the ordination of women to the diaconate. The first commission, established in 2016, had failed to reach a consensus. While there is evidence of women deacons in the early Church, the commission was unable to determine if they were sacramentally ordained. Francis established the new commission after bishops at the Synod for the Amazon asked that the matter be revisited in light of the real-life experience of the Church in their part of the world.

The decision to establish the new commission is consistent with a principle Francis first articulated in Evangelii gaudium. There he expresses his belief that it was not “advisable for the Pope to take the place of local Bishops in the discernment of every issue which arises in their territory.” The experience of the local Church is a theme close to Francis’s heart, and he has noted on several occasions that much of the evidence for women deacons comes from Syria. Like so much else Francis says and does, there is more here than meets the eye.

Christianity entered Syria by different paths. The path recorded in the New Testament traces the spread of the Gospel through the Greek-speaking synagogues of Syria and Asia Minor, before arriving with triumphant inevitability—“signs and wonders accompanied them”—in Rome. Christianity was on its way to becoming gentile and European.

Meanwhile, the faith was moving along another path that took it due east of Jerusalem, through a chain of Aramaic-speaking synagogues that linked diaspora Jewish communities in Mesopotamia to their ancestral homeland in Palestine. Over time, the Christianity that made its way along this path would view its progress as a homecoming, a return to Ur of the Chaldees where God first called Abraham. Aramaic-speaking Christians were reversing Abraham’s steps, bringing news of fulfillment to the land where it all began. Here, Christianity remained Semitic and Asian.

Long after Christianity in the West had severed most of its ties to Judaism, Mesopotamian Christians continued to read the Gospel, conduct worship, and live their faith in Aramaic. Their brightest light was Ephrem, whom later tradition identified as “the Syrian.” Ephrem chronicled the life of his church in a palimpsest of biblical names and events he called madrashê, the Aramaic equivalent of the Hebrew midrash. Ephrem taught his madrashê to consecrated women, “Daughters of the Covenant,” who chanted them as part of the church’s worship. Pious images of Ephrem often depict him leading groups of women in song. But like so many devotionally inspired portrayals, this one reduces a complex figure who challenged boundaries—and encouraged women to do the same—to a meek, compliant choirmaster. But the tradition Ephrem represented remembered him in a very different way.

Ephrem spoke for a community not long departed from the synagogue. For them, as for the first Jewish followers of Jesus, the Gospel was Good News specifically because it offered a way of entering into a covenant relationship with God that bypassed burdensome layers of rabbinic legislation. For women, who bore the brunt of that legislation, the Gospel was especially Good News. The triumph of Christianity was, overwhelmingly, a triumph for women.

Ephrem’s teaching is the mark of an entirely new age; For in the kingdom, men and women are equal.
sharetweet

Soon after Ephrem’s death, a protégé of his, Jacob of Sarug, wrote a tribute celebrating Ephrem’s work among the Daughters of the Covenant. The tribute begins simply enough. Addressing Ephrem, Jacob observes: “Our sisters were encouraged by you to give praise.” But in the very next line, Jacob points out that, before Ephrem encouraged the Daughters, “women had not been allowed to speak in church.”

Jacob never identifies the source of the prohibition; he didn’t have to. Scripture-savvy Syrians knew he was referring to St. Paul or, as recent scholarship suggests, someone writing in Paul’s name, who asserted male privilege in such matters:

According to the rule observed in all the assemblies of believers, women should keep silent in such gatherings. They may not speak. Rather, as the law states, submissiveness is indicated for them. If they want to learn something, they should ask their husbands at home. It is a disgrace when a woman speaks in the assembly. (1 Corinthians 14:33–35).

By the middle of the third century, a manual of Church order known as the Teaching of the Twelve Apostles (Didascalia Apostolorum) expanded the ruling, establishing it as law. Speaking in the voice of the apostles, the Didascalia argued that if Jesus had intended women to teach, he would have commissioned them to do so along with the apostles:

[I]t is neither appropriate nor necessary that women should be teachers, especially concerning the Name of Christ and the redemption of His passion. Indeed, you have not been appointed to this, women—especially widows—that you should teach, but rather, that you should pray and entreat the Lord God. For He, the Lord God, Jesus Christ our Teacher, sent us, the Twelve, to instruct the [Jewish] people and the [gentile] nations. For there were with us women disciples, Mary Magdalene, Mary the daughter of James, and the other Mary, but He did not send them to instruct the people with us. Indeed, if it were appropriate that women should teach, our Teacher himself would have commanded these women to give instruction with us.

It is against this backdrop that Jacob delivers what are among the most explosive words written by a Christian in any place or time:

Look! An entirely new sight—women are proclaiming the word.

What is more, they are called teachers in our gatherings.

[Ephrem’s] teaching is the mark of an entirely new age;

For in the kingdom, men and women are equal.

By gathering groups of women together to chant his madrashê, Ephrem challenged not only the authority of St. Paul, who produced most of the New Testament, but also subsequent Church teaching purporting to come from him.

Challenges to official teaching were hardly exceptional in the fourth century. Still, it would be hard to find a more direct provocation than the one Ephrem posed. How had he justified it? Jacob lets Ephrem speak in his own words:

Like your brothers, you were clothed in glory from the midst of the waters...

With your brothers you have shared a single forgiving Body.

And from a single cup of new Life you have been refreshed.

A single salvation is yours and theirs alike.

Baptism, Body, and Blood—the constituent elements of the new covenant—these were all the authorization Ephrem and the Daughters needed. Or were they?

Jacob follows Ephrem’s words with a question of his own: “So why,” he asks, “have you not yet learned to sing out in a loud voice?” If Ephrem based equality between the sexes on the new covenant in Jesus’s blood, why had women not yet realized their rightful place in the Church? Although enrollment in the covenant of Jesus eliminated impediments to the full participation of women, over time the Church found ways to reinforce the old gender hierarchy.

Between 373, when Ephrem died, and 470, when Jacob wrote his tribute, a sea change swept through the Church, one that would forever alter the landscape of Aramaic-speaking Christianity in Syria. Western monasticism brought a way of life that was entirely foreign to the Christianity Ephrem championed, a Christianity that knew nothing of communities of celibate men who banded together to live apart from everyday society. An innovation on such a grand scale needed a precedent—or, better yet, a patron—to recommend it. The monks found the authority figure they were looking for in Ephrem.

But there was a problem. Although the life and ministry of Jesus had done away with social and religious distinctions, the monks reverted to a rigidly patriarchal model of the sexes that traced the Fall to Eve, who lured Adam to taste the apple before passing on her seductive proclivities to her female offspring. If men who renounced sexual congress were plagued with lustful thoughts, so the logic went, the fault lay with the daughters of Eve who stirred their appetites.

Bringing Ephrem into alignment with a way of thinking so utterly contrary to his own required considerable effort. But the monks were up to the task. They carefully pruned his writings to make them reflect the emerging monastic mindset. It was the beginning of a great purge intended to bring Ephrem into conformity with the edicts of the imperial Church. Crafting Ephrem into a figure of obedient respectability began with the creation of a biography that, interestingly, included the legend that he had been a deacon as well as a monk. This the monks reinforced with an archive of texts intended to recreate Ephrem in the image of the ideal monk who snarled at women who crossed his path, and turned a young girl who had the temerity to look him in the eye into a toothless hag. It was a preposterous corruption of someone who emboldened women with the words: “Uncover your faces; sing out without shame to the One whose birth has given you the freedom to speak.”

Ephrem found models of the freedom to speak throughout scripture. But the two examples he returned to time and again were the Syro-Phoenician woman (Matthew 15:21–28) who endured public humiliation from Jesus’s apostles who tried to silence her, and the Samaritan woman Jesus spoke with at the well (John 4:4–16). In each case, it was the apostles, Jesus’s male followers, who took exception to the breaking of boundaries. Ephrem explained the Lord’s encounter with both women by pointing out: “Messiah Jesus abandoned every human pretense because the truth had come.”

The question of women’s ordination to the diaconate, like the issue of viri probati, (ordaining married men to the priesthood in the Latin Church), has become deeply polarizing, not least because of politicking within the Vatican by curial cardinals. Ephrem took the existence of married priests for granted. And for all his encouragement to women to claim their rightful voice, he never advocated for their ordination to the diaconate. He did something considerably more. He based their role on one Baptism, one Body, and one Blood, not on ordination. It was a vision that did not depend on the clerical institution that was already becoming top-heavy in Ephrem’s day, but on gifts freely poured out on all believers, regardless of gender.

By encouraging a deeper understanding of ministries in the early Church, Pope Francis has sought a path through the horns of a dilemma. In Querida Amazonia he asked that the ways women already serve—including overseeing communities where there is no priest—be officially commissioned by bishops so that women’s voices have a substantive impact on the life of the Church. It is hard not to hear in this an echo of Ephrem’s timeless instincts when he encouraged the women of his day: “Untie the cords of silence. Raise your voices. Speak out with the freedom that is yours by Baptism, the Body, and the Blood of the covenant.”

Published in the September 2020 issue:
View Contents
Tags
Women in the Church
Theology
Synod on the Amazon