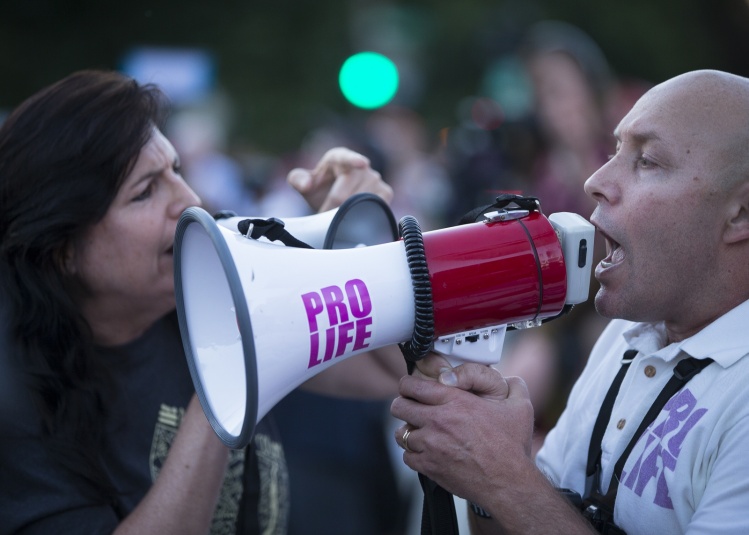 When hundreds of Catholic bishops met last month in Fort Lauderdale, Florida, the Trump administration’s policy of separating immigrant children from parents at the border loomed large over the proceedings. The Catholic hierarchy has consistently denounced Donald Trump’s nativist policies, and the president of the conference, Cardinal Daniel DiNardo of Galveston-Houston, specifically framed immigration as a “pro-life” issue.

“At its core, asylum is an instrument to preserve the right to life,” DiNardo said. One bishop even went so far as to suggest “canonical penalties,” which could include denial of communion for Catholics involved in implementing immigration policies the bishops’ conference calls “immoral.” While that proposal never gained traction, the fact that it was even raised in connection with an issue other than how to address pro-choice Catholic politicians is significant.

A few months before the bishops’ meeting, Pope Francis described the lives of migrants as “equally sacred” as the lives of the unborn in the womb. The pope didn’t stop there. Some Catholics, he said, view immigration as a “lesser issue” compared to “bioethical concerns” such as abortion, embryonic stem-cell research, and euthanasia. “That a politician looking for votes might say such a thing is understandable,” Francis said, “but not a Christian, for whom the only proper attitude is to stand in the shoes of those brothers and sisters of ours who risk their lives to offer a future to their children.” That Newt Gingrich, Rick Santorum, Paul Ryan, and other Catholic Republicans—along with a network of well-funded activist religious organizations and media on the right—have spent the better part of the last fifteen years making the case for exactly the kind of false distinctions criticized by Pope Francis underscores how the political narrative around “life issues” has started to change in recent years.

While that shift began before the presidential election, the Trump administration’s unique cruelty, and crude instinct for demagoguery and dehumanization, serves as a perfect counterpoint to traditional Catholic social teaching about human life. “There are no single-issue saints,” Los Angeles Archbishop José Gomez quipped at a recent conference on polarization at Georgetown University, making clear that respect for life can’t be reduced to opposing abortion. Gomez leads the largest and most diverse Roman Catholic archdiocese in the country. The archbishop is no fire-breathing liberal. In the realm of church politics, he’s a right-leaning moderate, comfortable at conservative gatherings with wealthy donors, a member of Opus Dei, and a vocal presence at anti-abortion events. Gomez’s challenges to the Trump administration’s immigration policies—“What is the public-policy purpose that is served by taking away some little girl’s dad?” he’s asked—can’t simply be dismissed by the right as exasperation in the Catholic Worker wing of the church.

For years, progressive people of faith have fumed over what they see as hypocrisy among pro-life activists and self-professed family-values politicians who rail against abortion and same-sex marriage yet won’t talk about how poverty, income inequality, and lack of quality health care threaten life and destabilize families. But those critiques were largely marginalized as conservative Catholic and evangelical leaders seized the media and political narratives. Pope Francis changes that dynamic most potently with the gravitas of his office, and a clarity of message that resonates in the contemporary media culture. He also speaks from the very heart of the church’s centuries-old teachings. Critics can challenge the pope, and many Catholic conservatives have done so with increasing contempt, but when you’re taking swipes at him for his commitment to orthodoxy, the impoverishment of your position is plain.

Trump’s nomination of Brett Kavanaugh, a conservative Catholic with close ties to the Catholic community in Washington, now offers another opportunity to expand the conversation on human life and dignity.
sharetweet

In one of his first interviews, the pope warned that the integrity of Catholic teaching would “collapse like a house of cards” if the church’s voice in the public square was reduced to opposing abortion, birth control, and same-sex marriage. When he addressed Congress in 2015, plenty of Republicans in the audience surely perked up when he said, “Every life is sacred,” a common formulation in pro-life circles. But the pope didn’t talk about abortion. Instead, he focused on how respect for life is threatened by the death penalty, urging the United States to abolish the practice. To be clear, the pope frequently denounces abortion in the strongest terms. Nevertheless, his papacy has created space for a better debate over life issues. He debunks the notion that Catholic voters and politicians should be guided by a simple scorecard of “non-negotiable” issues—a concept embraced by a number of conservative Catholic activists and even some bishops. “I have never understood the expression ‘non-negotiable values,’” Francis has said. “Values are values, period.” In the encyclical Laudato si’, Francis links respect for life in the womb to respecting the environment. “Everything is connected,” he writes.

This wider framing of what is viewed as a life issue, combined with the hypocrisy of leading pro-life groups in the Trump era, creates a much-needed tension. Charles Camosy, a Fordham University professor who has called for more restrictions on abortion, addressed this in a widely read New York Times op-ed last month that focused on the treatment of immigrant families at the border. Noting that the Southern Baptist Convention and the U.S. Conference of Catholic Bishops have challenged President Trump on immigration policies, Camosy wrote: “Why can’t the biggest pro-life organizations join these religious leaders in condemning the administration’s treatment of children? Where is National Right to Life? Where is the Susan B. Anthony List?”

The more textured—one might even say honest—conversation around pro-life issues is also unfolding in Christian evangelical circles. Thabiti Anyabwile, a self-described pro-life evangelical pastor, recently cautioned his fellow evangelicals about Trump’s opportunity to appoint another Supreme Court justice after the retirement of Anthony Kennedy. “What many evangelicals don’t seem to understand is they’re turning blind eyes to their brethren suffering at the hands of this administration for the long-held hope of overturning Roe,” he wrote in the Washington Post. “I’m for overturning Roe, but I’m also for protecting black and brown lives from racism and the kind of criminalization that swells our prisons and devastates communities or separates families at the borders.”

Trump’s nomination of Brett Kavanaugh, a conservative Catholic with close ties to the Catholic community in Washington, now offers another opportunity to expand the conversation on human life and dignity. Given the inevitable fights over the nominee’s position on Roe, it’s essential to remind those Catholics cheering on Trump’s pick that traditional church teaching doesn’t view abortion in isolation. The sanctity of life is threatened in myriad ways. If confirmed, how would a Justice Kavanaugh rule in cases involving guns, the environment, the treatment of immigrant families in detention? These are all pro-life questions.

“Everyone expects pro-life activists to champion fetal pain laws and everyone expects social justice activists to champion protection for Dreamers,” wrote Dan Darling, the vice president for communications at the Ethics & Religious Liberty Commission of the Southern Baptist Convention, in a USA Today op-ed last fall. “I hope this work continues, but imagine if immigration activists stood up for the unborn and pro-lifers stood up for Dreamers? Perhaps this could spark a new human dignity movement, where activism transcends tribe and party and moves into uncomfortable spaces, speaking up for the most vulnerable, regardless of political cost.”

I admit to lacking a deep reservoir of hope in this regard, given the nature of deeply held beliefs and the constraints of political tribalism. Yet I expect the ways in which the Trump and Francis eras are bumping up against each other will helpfully continue to scramble the fault lines of pro-life debates.