The Church Must Comfort, not Judge
By Jo McGowan
Women in the Church
Death and Dying
Spirituality
Columnists 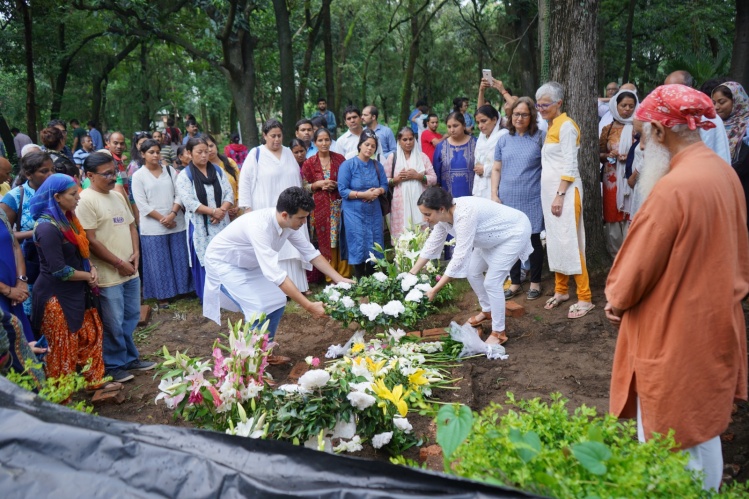 My daughter Moy Moy died suddenly and unexpectedly in July 2018. My first Commonweal column—written in 1999 when she was ten years old—was about her. Our pediatrician had told us then that Moy probably only had months left to live. My column was about our anguish and grief; about what we had learned from her brief life and how much we still didn’t understand.

Longtime Commonweal readers may remember that our pediatrician got it wrong. Moy Moy didn’t die. She defied the odds and went on to astonish us, triumphing over severe pneumonias, chronic seizures, and continued regression. Though she had once been mobile, independent, verbal (and very funny), starting at the age of five, she gradually lost all her skills. By the time she was twelve, she had stopped talking completely and used a wheelchair to get around. When she was sixteen, we had a tube implanted in her stomach because she could no longer swallow.

It didn’t seem to matter. In 1994, I started a school for her here in India. It grew and grew—from two children to three hundred today. Thousands of families from all over the country have benefited from our services in assessment, diagnostics, training, awareness, and advocacy.

Without speaking a word or lifting a finger, Moy Moy changed the world. She drew people to her in ways we couldn’t understand or explain—things happened around her and because of her that one could only call miraculous. Checks arrived just as we had given up hope; exactly the right person showed up with the skills we needed at the very moment we needed them; doors seemed to open and caverns to close as we approached. There was no way to explain any of it.

When she died, I turned instinctively to the church. I had stopped going to Mass in 2009 (pedophilia, the place of women, the anti-gay policies, the lust for power, the corporate values) but with Moy’s death, instinct and history took over. I was not myself. Somehow, I believed that the enormity of our loss would be communicated to the priest and that her funeral and burial service would be a source of strength and comfort.

Four hundred people crowded into that church. Perhaps twenty of them were Christians. The rest were Hindu, Muslim, Sikh, Jain, Parsee, and and Buddhist. Almost all of them spoke only Hindi. The priest, though Indian and fluent, chose to speak only in English. And his opening words were: “Many of you have probably never attended a Catholic Mass. Please do not come up for Communion. It is only for Catholics.”

Now, this is standard protocol in India, where non-Catholics often attend services out of respect, curiosity, or social obligation—like a funeral for a friend. And since prasad (a sweetmeat) is given to anyone who visits a Hindu temple or Sikh gurdwara, people naturally feel that Communion is the same: meant for everyone.

This institution and many of its rituals grew out of the very things Jesus rejected most stridently; the Gospel accounts repeatedly show him subverting hierarchy and upending the religious pecking order.
sharetweet

So I tried not to be too annoyed at the priest’s frosty, unwelcoming message. But when he began his sermon, I had to physically restrain myself. “We know she was a deprived child,” he said, two sentences in. “We know she was not normal, not like us. And though we can never understand what is in the mind of God when He allows such tragedies, for us her life should be an occasion of thanksgiving to Him, a reminder of how fortunate we are to be healthy and of sound mind.”

He went on and on in this vein, bewilderingly unable to read the mood of the audience. Luckily, most in attendance had no idea what he was saying because they didn’t understand English. Those who did rejected his premise categorically. Indeed, every single person in the church that day had a completely different take on Moy Moy’s life and what we all had lost with her death.

Our daughter Cathleen—improvising instantly the moment the priest sat down—took the pulpit and tried to repair the damage, bringing us back to our collective sense of amazement and gratitude with a riff on “Miracle”—a Seamus Heaney poem about the disabled man in the Gospel whose friends lowered him down to Jesus through a hole in the roof—to convey the power Moy Moy had exerted over “the ones who had known her all along.” And in the eulogy which followed, our son Anand described Moy’s magical transformative presence in so many lives, inspiring thousands, many of whom had never met her. My husband spoke of the angel in our midst—an angel in the true, ancient sense: a messenger from God. He said what all of us in that congregation believed: “We were lucky beyond belief. Moy Moy constantly reminded us never to dismiss anyone as unable to accomplish the amazing. She saw the light in everyone she met and she encouraged them to use that light to make this world a kinder, more loving place.”

The priest, though running the show and in his own territory, was the outlier. Clinging to a conventional, useless understanding of disability (deprived, abnormal, definitely not lucky), all he proved was how out of touch he was.

It’s not fair to judge the whole church based on one man’s performance, and I don’t. I don’t even judge him. He is a limited man and not lucky enough to have been touched by a person like Moy. Yet the anguish that I felt at our daughter’s funeral, the sense of personal betrayal from an institution whose claims of wisdom and compassion I once believed in, reminded me of the anguish the church inflicts in other areas. Because it’s all of a piece. Pope Francis responds to the sexual-abuse crisis (created by men) by calling a summit whose participants are almost entirely men. And if it’s still a “crisis” seventeen years after the story broke in Boston, it’s fair to assume that the people in charge of the institutional church still don’t know what they’re doing.

We are shocked that in many countries being gay is punishable by death, but we accept the church teaching that gay Catholics are “objectively disordered” and that their love may lead to eternal damnation. We shake our heads over Saudi women not being allowed to get a license, yet we accept that Catholic women may not aspire to the priesthood.

Death is often a teaching moment, a pause in the catalogue of ordinary days that is startling enough to make us look at everything afresh. Moy Moy’s death and the insulting, ridiculous homily we sat through at her funeral made it clear to me at last that I had been backing the wrong horse. I had been putting my faith in an institution whose time is up, in rituals that no longer serve any purpose and in hierarchies that have lost credibility.

This institution and many of its rituals grew out of the very things Jesus rejected most stridently; the Gospel accounts repeatedly show him subverting hierarchy and upending the religious pecking order. He lambastes the priests for loving power and authority more than justice and mercy. The people he likes live out on the margins, and while they may not be educated or know the language, their values are clear. The Samaritan drawing water from the well, the leper who said thank you, the bleeding woman who had the faith and the nerve to defy her culture and approach him—these were his people.

I came into the church that day to bury my daughter with “the ones who had known her all along,” and I left the church with them still beside me. I believe that Moy Moy remains in our midst and that Jesus is walking along with us. We are all in very good company.

Published in the May 17, 2019 issue:
View Contents
Tags
Women in the Church
Death and Dying
Spirituality
Columnists