Why Is Boko Haram Succeeding? 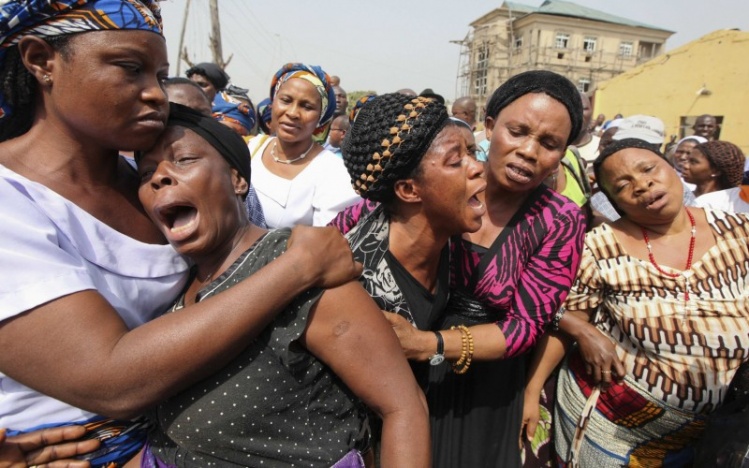 Officially, the terrorist group currently conducting a violent insurgency in northeastern Nigeria goes by the title “the Association of Sunnis for the Propagation of Islam and for the Jihad.” But the group is much better known by its unofficial name, “Boko Haram,” which, translated literally, means “Western education is an abomination.”

The group was founded in 2002 as a largely peaceful, albeit radical, religious community in Borno, one of Nigeria’s thirty-six states. Its rapidly growing political influence, aggressive recruitment, and financial resources soon caught the attention of Nigerian security operatives. A brutal attempt to disband the group led to the death in custody of its leader, Mohammed Yusuf. The scattered remnants then regrouped under a maniac named Abubakar Shekau, and launched a full-fledged military campaign to suppress religious, social, and political activities they considered contrary to the tenets of Islam and to impose a strict Islamic penal code known as sharia. True to its unofficial title, the group routinely targeted schools and occasionally lobbed grenades into churches.

Over the past six years Boko Haram has developed into a fearsome militia that inflicts terror on innocent citizens in rural northeastern Nigeria, bordering Chad, Niger, and Cameroon. With its trademark blend of sadistic violence and jihadist ideology, the group has become strong enough to rout whole units of the Nigerian military, sending soldiers scurrying for cover in the forest. As a result, it has made considerable territorial gains. Boko Haram’s most recent act of brutality was the destruction of close to four thousand homes and the displacement of twenty thousand residents of Baga and Doron Baga towns in Borno State. Typically, Nigerian government officials dispute the casualty figures, but Amnesty International, Human Rights Watch, and media sources say as many as two thousand people may have died.

Boko Haram shot to international notoriety in April 2014 when militants abducted 276 teenage schoolgirls in the town of Chibok in Borno State. That brazen act of terror shocked the world and sparked an international social-media campaign (#BringBackOurGirls) to press for the release of the kidnapped students. The scope and intensity of this global protest raised expectations: Boko Haram, it seemed, had bitten off more than it could chew, and it was only a matter of time before the Nigerian military decisively snuffed out this insurgency. Almost a year later, most of the Chibok schoolgirls are still missing, while media interest in the story has fizzled. Although one or two campaign groups continue to clamor for the girls’ release, Nigerian politicians have turned their gaze toward other matters—and above all to the next election.

The international media often characterize Boko Haram as an Islamic and sectarian insurgency, but beneath the thin veneer of religious ideology lies a savage and opportunistic agenda of criminality, bigotry, and wanton destruction. Conspiracy theories abound about the group’s “true” origins and intent. Some claim that Boko Haram is the creation of northern Muslim politicians hell-bent on destabilizing the government of President Goodluck Jonathan, a Christian from the south. But facts on the ground undercut such claims. Notably, Boko Haram’s zone of operation is in the predominantly Muslim north, and most of the thousands of people the group has killed have been Muslims. It has targeted mosques and high-profile Islamic leaders, attacked dozens of towns and scores of villages, and destroyed millions of dollars worth of property—all in largely Muslim areas. Boko Haram’s brand of violence knows no bounds: ordinary citizens, government employees, and elected public officials fear for their lives, irrespective of their religious affiliation. Mere mention of the group’s name strikes fear in civilian populations and triggers panic.

But civilians are also distrustful of Nigeria’s military, which has repeatedly failed to protect them from Boko Haram. In response to the insurgency, the government set up a Joint Task Force (JTF) that was to combine the best of the military and the police to combat Boko Haram. In northeastern Nigeria, JTF is as dreaded as Boko Haram. JTF has been accused of committing gross human-rights violations, including summary execution of suspected militants and their presumed sympathizers.

Boko Haram ups its ante with every victory it scores against the military. Emboldened by its success, the group continues to grow in its capacity to conduct raids and raze entire towns and villages to the ground. It has staged devastating suicide bombings in schools, churches, mosques, bars, parks, and outdoor markets. Nowadays its deadly arsenal includes children as young as ten, vested with remote-controlled bombs. At least a million innocent civilians have been displaced within northeastern Nigeria. Others have fled to southern Nigeria or across the border into neighboring Chad, Niger, or Cameroon.

The recent decision of Nigeria’s electoral commission to postpone presidential and parliamentary elections—originally scheduled for February 14 and now for March 28—counts as a major coup by Boko Haram. By way of explanation, the commission noted that the troops needed to protect voters at the polls are currently deployed to fight Boko Haram. But it would be sheer hubris to think that the military will quash Boko Haram in six weeks.

The longevity and gradual intensification of the Boko Haram insurgency expose two critical elements of Nigeria’s present malaise: systemic corruption and a failure of leadership.

Nigeria boasts the largest military in West Africa and the largest economy on the continent. Until recently, the country’s military enjoyed a good reputation because of its success in facing down powerful rebels and militias in Liberia and Sierra Leone. Curiously, what the military achieved outside the country’s borders, it now struggles to repeat in northeastern Nigeria. This isn’t for lack of financial resources. Nigeria spends much more on defense and security than on education and agriculture combined. Boko Haram has provided a convenient excuse for gargantuan budgetary allocations for “war against terrorism.” Yet we continue to hear about soldiers deserting the battlefront because they are poorly equipped, poorly paid, and prove no match for the superior firepower of Boko Haram. Demoralized soldiers have opted to face court martial for mutiny and insubordination rather than risk their lives fighting the jihadists. If the huge military budget isn’t giving them the resources they need to do their jobs adequately, where is it all going? It seems that Boko Haram has become a pretext for funneling millions of dollars into the pockets of corrupt politicians and military commanders.

AS FOR LEADERSHIP, the government’s stirring rhetoric about its resolve to crush Boko Haram amounts to no more than hollow propaganda. The more vigorously officials promise to catch and punish the insurgents, the more atrocities Boko Haram appears to carry out with impunity. There is no simple solution to the problem, but effective political leadership is surely a necessary part of the solution. So far, Nigeria’s leaders have proved to be totally inept in dealing with Boko Haram—treating the insurgency as if it were just a law-and-order issue, deflecting blame whenever possible, or, worse, simply wishing the problem away. One thing is clear: Boko Haram is not an isolated crisis. It competes in the deadly transnational league of terrorist outfits such as the Islamic State, the Taliban, Al Shabab, and Al Qaeda. The scale and scope of its operation now surpass the capabilities of the Nigerian government. It has taken far too long for President Jonathan and his advisers to figure this out, though in a recent interview with the Wall Street Journal Jonathan appealed to the United States to send combat troops to help in the fight against Boko Haram. But the U.S. State Department has so far denied receiving any request for troops. The United States has signaled that it might be willing to participate with African nations in a task force designed to address the insurgency, but recent efforts by the U.S. government to help Nigeria deal with the problem have been hindered by disputes over equipment and lingering accusations that the Nigerian military is itself guilty of human-rights violations.

To their credit, Christian leaders, such as Catholic Archbishop Ignatius Kaigama of the central Nigerian Diocese of Jos, cry themselves hoarse denouncing Boko Haram’s atrocities. They have led their flock in special novenas and have excoriated Western governments for neglecting the crisis. There isn’t much else they can do.

If better political leadership emerges from the postponed presidential election, the effort to combat Boko Haram will need to move on several fronts at once. First, in order to make jihadism less attractive to millions of impoverished, disillusioned, and unemployed youth in the poorer north, the government will need to undertake comprehensive economic reforms, as well as an overhaul of the country’s kleptocratic political system. It will also need to restructure the military and equip it properly so that it will be capable of executing complex counter-insurgency and anti-terrorism operations. And it will need to counter Boko Haram’s jihadist rhetoric with a convincing message to vulnerable Muslims in the north, reminding them that Boko Haram is a perversion of Islam, and reassuring them that they will be protected. There should also be more forums for cooperation between the leaders and adherents of various religious traditions. Finally, there needs to be greater regional and international cooperation, since defeating Boko Haram will likely require cross-border military campaigns.

Boko Haram is responsible for Nigeria’s worst crisis since the 1967 civil war. Its insurgents continue to march on towns and villages unopposed and to threaten important regional capitals. In pursuit of its goal to create some kind of trans-border Islamic state, it has demonstrated its willingness to commit crimes against humanity. Millions of traumatized Nigerians now live under the shadow of its ominous black flag, frightened by the gradual collapse of the state. Although the Nigerian government has until now been reluctant to admit it, Africa’s most populous country desperately needs help from the rest of the world to end this scourge.

Agbonkhianmeghe E. Orobator, SJ, who is from Nigeria, currently serves as principal and president of Hekima College Jesuit School of Theology and Institute of Peace Studies and International Relations in Nairobi, Kenya. He is the author of Theology Brewed in an African Pot, editor of Reconciliation, Justice, and Peace: The Second African Synod, and coeditor of Feminist Catholic Theological Ethics: Conversations in the World Church (Orbis, 2014).