It’s fair to challenge Biden on his positions, but not to question his faith.
By John Gehring
U.S. Catholicism
Election 2020 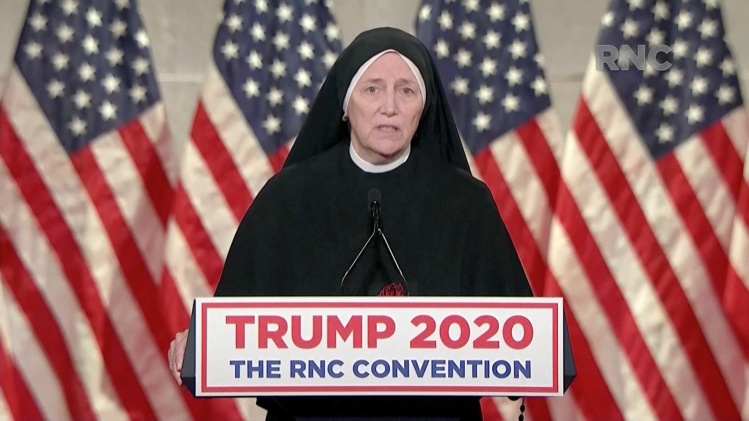 The loudest voices on the right are again trying to define the Catholic political narrative leading into the election.

“The first time in a while that the Democratic ticket hasn’t had a Catholic on it,” Bishop Thomas Tobin of Providence, Rhode Island tweeted sarcastically. “Sad.” A South Carolina priest with a large following tweeted that Joe Biden is a “fake Catholic.” Lou Holtz, the former coach and folksy icon of the Notre Dame football team, called the former vice president a “Catholic in name only” during the Republican National Convention last week (the university disavowed his remarks). The convention also featured Sr. Deirdre Byrne, of the Little Workers of the Sacred Hearts of Jesus and Mary, who breathlessly hailed Donald Trump as “the most pro-life president this nation has ever had.” Standing at a podium that bore a “Trump 2020” sign and holding a rosary that she described as a “weapon,” Sr. Byrne called the Biden-Harris ticket “the most anti-life presidential ticket ever.” While claiming that Trump has been “defending life at all stages,” she also falsely stated that Biden supports “infanticide.”

These kinds of attacks aren’t particularly new, even if delivered in the extreme tone of the Trump era. Sen. John Kerry, the last Catholic Democrat to receive his party’s presidential nomination, faced similar blowback in 2004 over his support for reproductive rights. Nor are the efforts to delegitimize Biden’s faith sporadic or isolated. The professional Catholic right is made up of well-funded activist groups, anti-Francis bishops, and single-issue fundamentalists who have spent the past several decades organizing around the idea that Catholicism in public life can be reduced to opposing abortion. This is a useful, if grossly distorted, political theology for the conservative movement and the Republican Party, but it also has nothing to do with traditional Catholic moral theology.

Church teaching on political participation emphasizes prudence, the need to apply broad moral principles to specific situations and imperfect choices, and informed consciences that can discern not only complex issues, but also the character and intentions of candidates. As longtime Church analyst Fr. Tom Reese noted in Religion News Service, the bishops’ guidance for Catholic voters weighing a candidate’s position on abortion is a lot more complicated than what we saw from a few handpicked Catholics at the Republican National Convention, or from vocal bishops firing away on Twitter. Here is what the bishops have to say in “Forming Consciences for Faithful Citizenship,” a document released every presidential election year, which acknowledges that “Catholics often face difficult choices about how to vote.”

A Catholic cannot vote for a candidate who favors a policy promoting an intrinsically evil act, such as abortion, euthanasia, assisted suicide, deliberately subjecting workers or the poor to subhuman living conditions, redefining marriage in ways that violate its essential meaning, or racist behavior, if the voter’s intent is to support that position. In such cases, a Catholic would be guilty of formal cooperation in grave evil. At the same time, a voter should not use a candidate’s opposition to an intrinsic evil to justify indifference or inattentiveness to other important moral issues involving human life and dignity.

Trump’s most vociferous Catholic cheerleaders never bring up the fact that bishops list “racist behavior” under actions that are “intrinsically evil.” Given that Trumpism is defined, in large part, by white nationalism and blatant appeals designed to intentionally stoke racial resentment, this silence is not surprising. But it is instructive. I also don’t hear any “pro-life” MAGA Catholics quoting Pope Francis, who after the police killing of George Floyd said that “we cannot tolerate or turn a blind eye to racism and exclusion in any form and yet claim to defend the sacredness of every human life.” Even more, the pope’s insistence that the lives of the poor and “those already born” are as “equally sacred as life in the womb” clearly articulates consistent-ethic-of-life principles that you won’t find in GOP political advertising.

It’s legitimate for Church leaders and others to challenge Biden on his positions, including his support for abortion rights. When done with civility, and in context with the many interconnected social justice issues at play in the election, this is part of the healthy debate that’s required in a pluralistic society. But deliberately distorting Biden’s position as “pro-infanticide”—and challenging his right to call himself a Catholic as some bishops are doing—doesn’t serve this function. Questioning an individual’s deepest commitments to his faith is religious slander. The fact that pastors are engaged in such behavior makes it all the more disturbing. This is why it was so important that Chicago Cardinal Blase Cupich addressed it during his homily on Sunday. “There should never be a time or a moment in which we judge others and their faith journey and say that a person is not Christian enough or Catholic enough,” the cardinal said. Without citing Biden or any of the bishops who have made exactly that claim, the cardinal led by example and put down an important marker.

Many of the same people who claim Biden is “Catholic in name only”—the same epithet hurled at Catholic progressives for many years—are happy to pick and choose from their own “cafeteria Catholic” menu. Conveniently ignoring or downplaying Church teachings on racism, the dignity of immigrants, and economic inequality, these Catholics indulge in the same selective theology they call out in others. And self-appointed guardians of the faith who are so quick to accuse people of being “anti-Catholic” go quiet or join the parade when a fellow Catholic in public life has his personal faith attacked. Those who have the audacity to judge Biden’s commitment to his faith, and even the state of his soul, are themselves willing to engage in a form of “anti-Catholicism” if it suits their ideological or political purpose. There is nothing authentically Catholic about that hypocrisy.