Who Has the Final Word?

My last fight with my father
By Dominic Preziosi 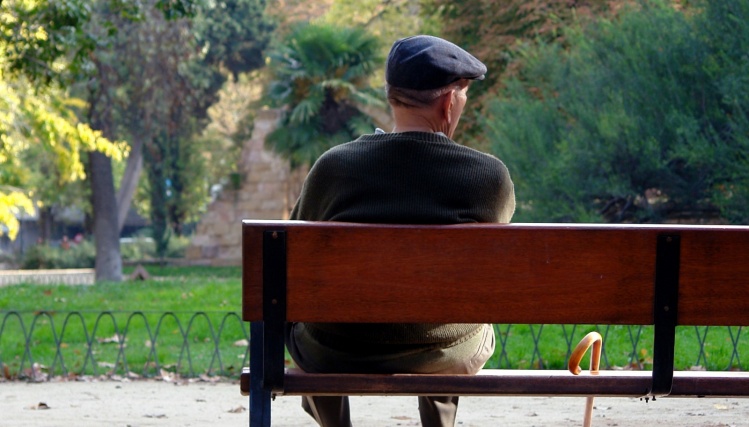 Grace at our table growing up was almost always the Hail Mary. So on a recent visit to see my parents, both now into their eighties, I found myself listening with unexpected fondness as they took up the old prayer before dinner one night. What struck me these many years later, in a different, more powerful way than it once had, was how they fell upon those final words: now and at the hour of our death. There was a detectable slowing of tempo through the trailing string of syllables. Then, a portentous silence, followed at last by the closing exhalation: Amen.

Perhaps it was my own projection. My mother’s health is good but the natural effects of age are apparent; my father’s cognitive abilities and mobility have in the past year diminished noticeably. They’d never denied to themselves or to their children the inevitability of that once safely distant hour. But their recitation this evening suggested frank awareness of its nearness.

The decline in my father’s health has been accompanied by a lightening of his mood and a corresponding increase in, I’d have to say, his kindness. A surprising and welcome development, far too long in coming. It’s not that he was ever really unkind. There were times when he could almost be loving, though you might have to squint to see it. But even if he wasn’t mean, he could also be just mean enough. He was often visibly riled about something: his job, the bank account, the leaves in the gutters, the traffic on the highway, the odds of the postal service screwing up so that a bill payment would be delayed and his credit score would suffer and his kids wouldn’t get to go to college and he’d have to work until he fell into his grave because there was no way he’d ever be able to afford retirement. None of this was rational. All of it made him quick to anger and unpleasant to be around. Once when we were already running late for something and the car refused to start, he punched the molded plastic of the dashboard so hard it opened a crack six inches long.

Seven years ago this month, on turning eighty, he helped arrange a trip for the entire family—kids, spouses, grandkids (he had been able to afford retirement after all)—to the region of southern Italy his own parents had emigrated from in the early twentieth century. The weather was very hot when we arrived, and the nuisances of travel had imposed their toll. He was, as some of the grandchildren complained, cranky, and the fact that more than a dozen of us were sharing a single rented villa didn’t help matters. Soon we settled in and tried to relax, to enjoy the views of the faded hills and distant sea and the warmth of the sun on our skin. Yet there remained that old oppressive feeling, familiar from childhood: my father’s anxiety and stress, and the irritability that accompanied it. Of course it was easier for me to shake off now. But that didn’t stop the memories from cropping up: the dismissiveness or ridicule or unrealistic demands, the eruptions of temper, the fearsome shouting. As a teenager, I tried to push back against his caustic remarks, to speak for myself, to show I could shout just as loudly, though there was no way I ever could—or would. Even if they were about nothing, the fights were real, and always unwinnable. There was never any question of who would have the final word.

I wasn’t powerless to stop it. But I can’t say that I really tried to.
sharetweet

In time, too, my politics diverged from his, and this gap widened as the years went on. He was as contemptuous of my liberal homilizing as I of his conservative pontificating, and this made for some of the worst conflicts of all. But there seemed to be other dynamics at work that I had a hard time understanding, a situation exacerbated by my own insistently hardening interpretations of my experiences growing up. Ordinary interactions would somehow turn fraught, seemingly pleasant conversations would suddenly run off the rails. This persisted far too long into my adulthood, much to my disappointment and increasingly to my shame. I wasn’t powerless to stop it. But I can’t say that I really tried to.

And so it was one morning on the family trip to Italy. We’d been in the house for a few days and it was time to bag the trash and gather the recyclables for collection. My father, observing the efforts, remarked on the pointlessness of separating out the plastic bottles and containers. Recycling was idiotic, he said; there was no profitability in it, no way to make a business out of it, and as long as that was the case no one should even bother. Moreover, it was just another way for people like me to demonstrate their sanctimony and make everyone else feel bad. On and on he went. Finally, foolishly, I snapped at the bait.

It escalated in familiar fashion and went on for a while, in full display of all, until—no way to have the last word—I retreated to a room somewhere in the cooler depths of the house. We all know the feeling that follows a pointless argument: the mix of regret and embarrassment and still smoldering rage. Outside, I could hear my teenage nephews snickering over what they’d just witnessed—a fight over recycling. I wanted to hide there all day.

But that morning we were scheduled to make the drive to Matera, the small city my father’s mother came from. I’d been looking forward to it, having learned, in bits and pieces over many years, some facts of her life, but also of her death, from cancer, when my father was just fifteen. The story, which I’d heard from others but never from him, was that he was alone in the hospital room with her at the hour it arrived. I had long wanted to see the place she had been born, and in spite of everything was aware of the significance of seeing it with my father.

So I collected myself and went in search of him. Finding him outside on the terrace, I put my hands on his shoulders. Though I’d long since grown taller than him, I was nevertheless surprised at just how much shorter he really was. Before I could lose my nerve I told him that I loved him (had I ever said it before?)—then quickly added: “But you drive me crazy.”

He looked up at me for a moment, then began to speak. “All I wanted to say about recycling—don’t interrupt, just listen to me for a minute—all I wanted to say was…” He restated his case at some length, but by then it didn’t matter. He’d had the final word my whole life, and there was no reason to deprive him of it now.