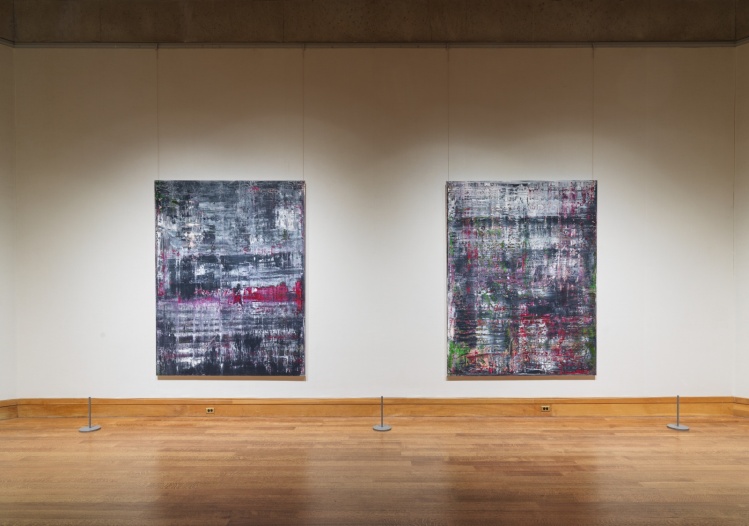 In the summer of 1944, a camera was smuggled out of Auschwitz. Inside it was a roll of film with four images from the gas chambers at Birkenau, taken by members of the Jewish Sonderkommando. These photos were distributed worldwide by the Polish resistance. Two of them appear to have been taken in quick succession, discreetly, from within a shadowed doorframe. The other pair, one of which is blurred, appear to have been shot at the hip from a distance. The photos show Jewish women stripping before the gas chamber, and dead bodies waiting to be incinerated. White smoke billows as other bodies burn.

In 2014, the German painter Gerhard Richter sought to make a statement on the Holocaust. He copied these stark black-and-white images onto four monumental canvases, first in pencil, then in oil. And then he began to cover them. Over several weeks, he applied layer after layer of paint, first in muted silvers and greys, then reds and greens and purples and blacks, often pushing it across the surface with a squeegee to create ripples and chasms of paint. Two of the paintings are mostly gray, white, and red; the others have large areas of pulsating green. He called the group his Birkenau paintings.

This polyptych came to New York City in March 2020 for a career retrospective at the Met Breuer. Because of the pandemic, the show had to close after just one week. So I saw Richter’s paintings for the first time on a computer screen, where they lost their particularity, their colors washed out and their scale uncertain. I scrolled through them quickly.

In “The Work of Art in the Age of Mechanical Reproduction” Walter Benjamin writes that a key development of mass entertainment is a loss of a context. The physical object loses its particular circumstances when it is reproduced as image, especially in a medium like film. Viewing a work of art, which used to require traveling to its location, looking, noticing, and thinking, is transformed into a totally passive form of consumption. “The public is an examiner,” Benjamin writes, “but an absent-minded one.”

The internet has made this problem worse. Today one can scroll through dozens of paintings in the time it takes the eye to return to a painting from its placard in a gallery. So, too, with images that record atrocities. Throughout the long summer of 2020, the internet was full of arguments about Richter’s paintings, with well-known critics and anonymous commentators both finding ways to make the paintings and the deaths they commemorated all about themselves. A prominent Atlantic writer took the occasion to claim that America was “nearly as bad as Nazi Germany,” while someone on Twitter insisted that Americans should learn about the atrocities committed by Americans, not those committed against “Beckies” like Anne Frank. Never mind that the people who were gassed, shot, beaten, and worked to death at camps like Auschwitz-Birkenau were 6 million individual humans, each with his or her own desires, grudges, hopes, pleasures—each unique and irreplaceable. In our digital life, even suffering can be contextualized out of existence.

This is an abstract art that saves history from the perils of abstraction.
sharetweet

The Sonderkommando images document the end of perhaps fifty or sixty people, full of everything that marks us as human beings: bone, muscle, blood, skin, hair. We don’t know very much else about these women, other than that they were murdered during the summer of 1944, when the beaches of Normandy had recently been stormed and the Wehrmacht had already lost the Battle of Stalingrad. It was no longer a matter of how the war would end, but when. These women might have been French, or Czech, or Hungarian, shipped to Poland in boxcars and gassed upon arrival.

The Birkenau paintings are currently on display in their own room at the Metropolitan Museum of Art, the four canvases facing four reproductions of the images on which they are based. I went to see the paintings toward the beginning of September. It was my first trip to the Met—or to any museum—since New York City shut down in early March. At first, I was overpowered by the size and physicality of the paintings. The effect of randomness, the way the paint seems to slip and stutter across the canvas, had been imperceptible on a screen. But as I viewed them at the Met, the presence of oil paint asserted itself with force. The paintings reminded me of posters half-scraped from a wall or the view from a painted-over window. Richter’s squeegee method compels the viewer to focus, to take in every ripple, every bleed, and to consider what is buried beneath. Rather than representing the visible elements of an atrocity as a figurative painting might—doorway, bodies, smoke—Richter’s Birkenau paintings try to reflect the singularity of this particular atrocity and its particular victims. The physical presence of each painting reflects the concrete nature of pain and death, even the mass death of genocide. This is an abstract art that saves history from the perils of abstraction.

Of course art can also work the other way, transforming individual suffering into something universal. The best paintings of the Crucifixion do precisely this. Christ’s body, bent and broken, reminds us that suffering is a universal feature of the human condition. Such images invite us to identify with the divine victim, mixing his pain with our own. Art can take either approach to suffering: it can draw parallels or insist on the utterly, incommensurably specific.

For it to do either of these things effectively, a work of art needs to be seen as it was intended to be seen, since its context and physical circumstances are also a part of the artist’s intention. The internet has made pandemic life much easier for those who can use it for work and school, or just to stay in touch with loved ones. But something is always lost in the translation to a screen. A deep encounter with art becomes possible only when viewer and object share the same space. Scrolling through digital versions of art is what Benjamin called an “absent-minded” activity, and we need to be as present as possible when we look at paintings like Richter’s, paintings that attempt to represent the presence of suffering itself.