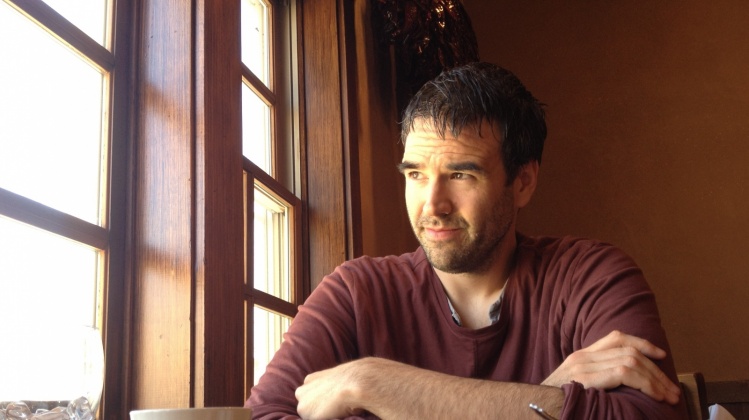 Greg Gerke (Hannah Bergman, used with permission from the author)

In February of 1819, the poet John Keats had a good gossip session. Writing to his brother and sister-in-law in Kentucky, he related a romantic imbroglio that his friend Benjamin Bailey, a recently ordained curate, had found himself in: women jilted, friendships lost, the whole works. Then, as was his wont, Keats pivoted from bedroom farce to poetic philosophy:

A Man’s life of any worth is a continual allegory—and very few eyes can see the Mystery of his life—a life like the scriptures, figurative—which such people can make out no more than they can the hebrew Bible [sic]. Lord Byron cuts a figure—but he is not figurative—Shakespeare led a life of Allegory; his works are the comments on it—

This passage, casually thrown off at the end of a chit-chatty letter, offers a new way to think about biography, art, and the relation between the two. A life, if lived well, becomes a text to be read; a work of art, if made well, becomes a gloss upon that text. In Keats’s vision, life is an aesthetic, moral, and hermeneutic enterprise. We’re called to make our lives beautiful and instructive—and then, just as crucially, we’re called to interpret the mysteries we’ve lived.

I thought of Keats’s letter when reading Greg Gerke’s brilliant book of essays, See What I See (Zerogram Press, $19.95, 296 pp.). Like Keats, Gerke sees life aesthetically and art existentially. “If some people live vicariously through others,” he writes, “other people live through art.” Gerke has no time for art as sociology or writing as Take Factory. He wants something more, something better: “The overriding ‘aliveness’ of a work of art, how it keeps speaking after time has gone by, is the only thing it owes.” How do we know if a text is alive? To channel one of Gerke’s favorite writers, Wallace Stevens, it must be abstract (that is, it must not simply reflect reality but find a form for it); it must change (of Stevens, Gerke writes, “He goes on, he goes around. A poet, in the guise of a blackbird or river, always moving”); and it must, above all, give pleasure. Gerke loves the late, great William Gass, and his criticism displays a Gass-like attention to language’s sensuousness, its smell and taste and sound. Gerke writes with style, and he demands that others do, too. As he puts it, “If you don’t have music, no-one will listen, or at least they won’t listen very hard.”

Gerke is wary of much writing that goes by the name of criticism. In seeking a quasi-scientific objectivity that is soul-crushing to read and impossible to achieve anyway, such writing forgets why we come to art in the first place: to enable an encounter that might, in some way, change us. In one essay, Gerke describes a post-college friendship with a man ten years older. The pairing was unlikely: “A Catholic Midwesterner and a Jewish New Yorker. Two people who looked like Abbott and Costello together, just with less weight on our bodies.” This friendship emerged from a running conversation about art: the fiction of Paula Fox, the films of Stanley Kubrick, the music of Thelonius Monk. “We’d insert ourselves in the story,” Gerke writes, “even if we didn’t mean to; that is, we did with literature what it can rarely do for young people studying it in school—play life experience both against and within it.” One pleasure to be found in See What I See is this sense of art as something we live against and within. As he writes, “Though it is frozen in time, art makes different appeals to our different ages. Without it, how could I make better sense of what informs my choices?” In a recent essay, the New Yorker’s art critic Peter Schjeldahl described how the privacy of aesthetic encounter leads to the intimacy of conversation: “We look at paintings, which are specific objects in specific places, as individuals, alone. We may then turn, with excitement or anxiety, to others in the hope of having our responses confirmed. Those conversations are the test of any art’s cultural vitality.” Gerke, whether talking about Gertrude Stein or Patrick White, generates interesting critical conversations and so helps keep his beloved texts alive. At one point, he writes, “It is a deep and probably inextinguishable, but elementary, tragedy when you can’t talk about the things you love with the people you love.” But what joy when you can.

“If you don’t have music, no-one will listen, or at least they won’t listen very hard.”
sharetweet

In the book’s strongest essay, Gerke watches the films of Eric Rohmer and realizes that their characters “are more than miracles; they are the people I had become, been, and been with throughout my life.” One former lover reminds him of the eponymous heroine of Claire’s Knee, another of Chloe from Chloe in the Afternoon. Playing his past romantic life against Rohmer, he sees more clearly where he failed in the duties of love; he imagines how he might have acted more truly, more beautifully. To put it in Keatsian terms, Gerke finds that, if his life is an allegory, Rohmer’s works are the comments on it. “The more I watched and re-watched Rohmer,” he writes, “the more I relived, and, oddly, lived.”

The ostensible subject of Rachel Eisendrath’s Gallery of Clouds (New York Review Books, $19.95, 160 pp.) is Sir Philip Sidney’s sixteenth-century prose romance, Arcadia, though part of the book’s genius lies in how far it ranges from this starting point. Eisendrath, director of the Medieval and Renaissance Studies Program at Barnard College, is interested in romance as a genre. What is romance? A long, fantastical narrative, often filled with lords and ladies performing the heroic actions they’re supposedly prone to. Romances tend to proceed less by a dramatic arc—rising action followed by climax and resolution—than by accretion, one adventure giving way to another. We get the sense, as Eisendrath writes, “that the adventures could go on forever, that there is no intrinsic reason why these books should ever have to stop, and that, as Borges also says, even after these books have ended at some more or less arbitrary spot, you will feel that they are still, somewhere, going on.”

The genre, ascendant for much of the medieval and Renaissance periods, lives on today. General Hospital? A classic romance, with Port Charles replacing ancient Britain and the Cassadines and Quartermaines serving as the new nobility. The various iterations of the Marvel Universe? Another modern example of the genre. (Even after Loki ends, somewhere a writer will be spinning off another series.) This paratactic, “and-then” structure gives our reading of romance a strange temporality, Eisendrath argues: “These books do not fight off death but rather forestall it. They do so by increasing the thickness of time, which maybe also means that they are sometimes a little boring—in a luxuriant way.” By flirting with and even offering up boredom as one of the distinctive readerly experiences of the genre, romance doesn’t abolish time—where did those hours go?—so much as it makes us feel, as we rarely do, time’s duration.

Eisendrath’s book is filled with critical intelligence, mostly her own (“Whatever the Renaissance was, you can’t portray it in a photograph. You must make a tapestry of it, or compose a sonnet, or write a romance, or dance a Morris Dance, or bait a bear”) and some borrowed (“C. S. Lewis said that the best way to read an Italian romance—of which Sir Philip Sidney’s Arcadia is a first cousin on the family’s English side—is for eight hours a day in a room by the sea while recovering from a minor illness.”). Gallery of Clouds exhibits a loose structure, following the whims of association rather than the rules of academic argumentation. There are lovely asides on the magic of seminar discussion, on Eisendrath’s introduction to rhythm and its relation to style through childhood games of double-dutch, on reading at night by lamplight.

Though the book often and pleasantly wanders afield, it also offers a central, and rather traditional, argument: that romance’s artifice isn’t a failure but a different way of thinking about representation and its relation to the real; that romance’s courting not just of the beautiful but the unbelievable and even the silly aren’t flaws we need to get past but a challenge to our own understanding of art and its ends. Describing the intricate syntax of Sidney’s Arcadia, Eisendrath admits, “To a modern ear, these sentences may sound overly ornate, trinketish.” But that’s because Sidney wrote Arcadia right before a plainer style of prose replaced the older “oratorical style.” This older style was meant, above all else, “to appeal to the ear.” Eisnedrath then playfully takes on the role of “advocate for the ornate rhetorical style.” She reminds us that plainness of speech doesn’t necessarily relate to truthfulness of speech (remember George W. Bush’s plainspoken prevarications?), that the ornate style, precisely through its rhetorical force, might attune us to “the seductive role of words” in political and cultural speech more generally. All language, no matter how simple it seems, contains artifice. Hemingway is a great stylist but his style is no more real—which is to say, no less mannered—than that of Proust.

We could say the same thing about Sidney’s artifice at the level of plot and character. Does a story involving shepherds and potions strike us in 2021 as “realistic”? No, but that’s just because, as Eisendrath writes, “We favor the thing side of things: we call a spade a spade and know aestheticism when we see it in the road.” But aestheticism isn’t some filigreed nonsense that we clear-eyed moderns have seen past. When done well, aestheticism offers a different route, perhaps even a better route, to the real than realism itself. Moreover, if realism, in its disciplined asperity, can’t accommodate things like beauty and joy and transfiguration, then it doesn’t actually merit its name. Gerke and Eisendrath both know this, as did Keats before them. From a letter Keats wrote to that rascally curate, Benjamin Bailey: “I am certain of nothing but of the holiness of the Heart’s affections and the truth of the Imagination—What the imagination seizes as Beauty must be truth.”