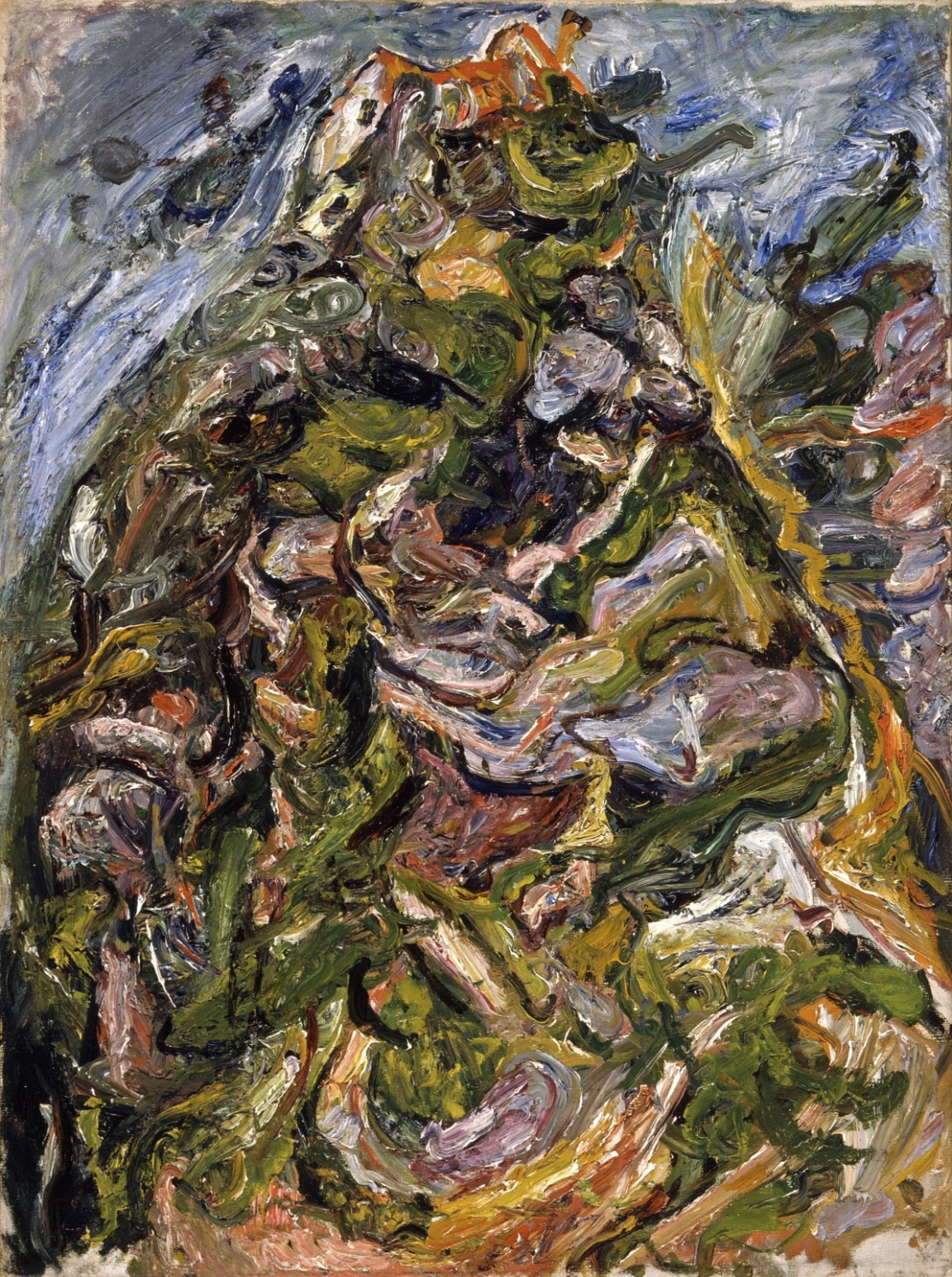 In 1952, the Dutch-American artist Willem de Kooning found himself in the Philadelphia suburb of Merion, Pennsylvania. Taking a break from his studio in New York, where he was at work on his experimental Woman series, the abstract expressionist had come to see the famed collection of chemist-turned-connoisseur Albert C. Barnes. Among the many meticulously arranged works by masters like El Greco, Renoir, Matisse, Cézanne, and Picasso, one artist’s quietly kinetic paintings—portraits, landscapes, and still lives—seemed to “glow from within,” striking de Kooning with “a special kind of light.”

The works, de Kooning learned, had been painted by another expatriate. His name was Chaïm Soutine, a Russian Jew who left a shtetl near Minsk and emigrated to Paris in the 1910s, where he lived until his early death in 1943. Likening him to a “juicier,” more electric Van Gogh, Barnes was convinced that Soutine’s art was revolutionary; he bought scores of his paintings in the 1920s, helping launch the artist’s career in the United States. De Kooning evidently agreed with Barnes’s assessment: speaking during a 1977 interview in terms at once erotic and religious, de Kooning cited Soutine as one of his chief influences, praising the painter’s “fleshiness” and suggesting that his works were capable of enacting “a kind of transfiguration.”

Now the Barnes Foundation in Philadelphia has brought the two artists—whose lives and careers partially overlapped, but who never actually met—together for a set of “conversations in paint.” The show is small, featuring just forty-two paintings and spread over five galleries. (Co-organized with the Musée de l’Orsay and the Musée de l’Orangerie, it will travel to Paris in August.) But it also feels like the perfect size for a post-pandemic exhibit. Arranged with a light yet incisive curatorial hand by Simonetta Fraquelli and Claire Bernardi, Soutine/de Kooning largely dispenses with wall labels and critical analysis, and instead rewards close examination of the paintings themselves. What emerges, more than theory about the tensions between figuration and abstraction, or the vicissitudes of art history, are the tactile, visceral quality of Soutine’s and de Kooning’s canvases, where the former’s dabs and globs complement the latter’s smears and scrapes. Staring at them side-by-side—the show opens subtly, with just a single pair of paintings—unlocks a seemingly infinite set of affinities, divergences, and connections. 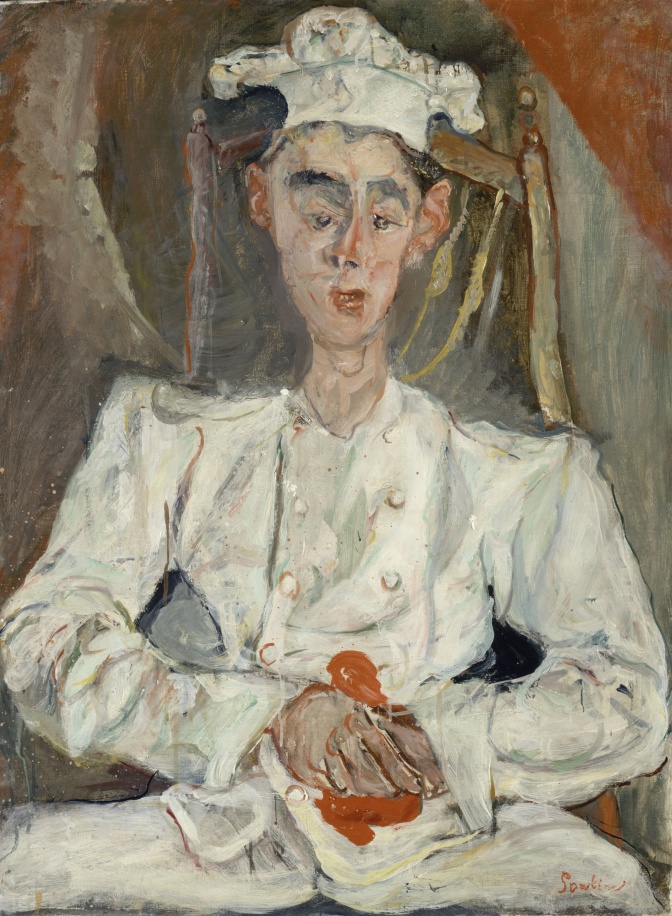 It’s not hard to see what first drew Barnes and de Kooning to Soutine. His arresting portraits from the 1910s and ’20s, the first works on view, reveal both a wry distrust of himself and a sure confidence in his capacity to observe and render the inner lives of other people. In his laconic 1918 Self-Portrait, he’s clothed in a rumpled blue smock and stares straight ahead at the viewer; another portrait (evidently by Soutine) covers his right shoulder and fills the left side of the frame. Soutine is clearly channeling similar works by artists like Velázquez and Rembrandt, which he regularly studied in his frequent trips to the Louvre. Yet his own Self-Portrait, geometrically and chromatically centered on his puffy, blood-red lips, also evokes the grotesque—so called because it traditionally portrayed subjects best kept out of sight. After Barnes helped make him famous, Soutine began to appear at Parisian salons in elegant clothes (indeed, Polish writer and painter Józef Czapski calls attention to his “expensive felt hats and gleaming leather boots”), yet he remained something of an outsider.

How different his portraits of other people are. Soutine playfully accords his subjects—ranging widely in age, sex, and occupation—palpable dignity and respect. Not that they were always pleased with the results: Soutine’s Portrait of Madeleine Castaing (1929), his wealthy patroness, shows a fidgety, nervous woman whose thick fur coat seems to swallow her whole. (She promptly sold it.) Other portraits, though, like The Little Pastry Cook (1922–1923), were better received. It shows its exhausted, uniformed subject slouched against the back of his wooden rocking chair. Underneath his drooping baker’s hat (which could also be mistaken for a jester’s cap), the boy’s weary eyes gaze down at his hands, which are gripping a red napkin. Soutine’s curvy, elongated brush strokes mimic the motion of sagging dough and help infuse the painting with subtle poignancy: the young baker’s broad shoulders and thick chest are out of proportion with his tiny head and slender waist, suggesting a moment of tension and transition in which he aspires to, but cannot yet achieve, independence and adulthood.

For all his skill in portraiture, Soutine was best known for his pioneering landscapes, which used a mix of frenzied brushwork, lavish color, and distorted perspective to produce a double effect of familiarity and estrangement. His views of the small Catalan village of Céret and its countryside (in the foothills of the Pyrenees) are alternately enticing and unsettling; in Landscape (1922–1924), bright blue skies and windswept green trees fuse with maroon roof tiles and beige stucco walls to suggest a healthy symbiosis between nature and civilization. Hill at Céret (1920–1921), though, conveys just the opposite: a towering peak, as if sculpted with smudges of washed-out greens, browns, and yellows, seems to want to rid itself of the single, barely discernible house poised precariously atop its summit.

The technique is Soutine’s, but the preoccupations—desire, dissatisfaction, the emptiness of pop culture—are de Kooning’s.
sharetweet

It’s here that the show begins to shift to the equally agitated works of de Kooning, who liberally borrowed Soutine’s brush movements, color schemes, and subject matter as he blended portraiture, landscape, and abstraction into a single genre. One gallery features a few of de Kooning’s famous Woman series, including Woman II (1952), Marilyn Monroe (1954), and Woman as Landscape (1954–55). Their jarring, collage-like features, which seem to dance about the canvas, would be equally at home on a spray-painted mural or a graffiti-covered subway car. The technique is Soutine’s, but the preoccupations—desire, dissatisfaction, the emptiness of pop culture—are de Kooning’s.

A subsequent gallery features a series of bright, pastel-colored paintings, some made directly on driftwood and the backs of old doors. They were composed by de Kooning after his move (in the 1960s) to East Hampton, Long Island, whose low-lying, watery landscape reminded him of his native Holland. Here de Kooning’s swirling drips of pink, orange, and yellow, which capture women in various states of aquatic distortion, manage to convey a greater sense of serenity and ease than did the Woman series, even as they take up the same themes of eroticism and evanescence. (De Kooning claimed, according to the catalog, to have been equally inspired by female clam diggers in the Hamptons and the rice-picking mondine of Italian director Giuseppe De Santis’s Bitter Rice, starring the heartthrob Silvana Mangano.)

At this point, it’s worth asking whether de Kooning’s interest in Soutine ever extended beyond the former’s admiration for (and adaptation of) the latter’s formal technique. Is the conversation envisioned by the show’s curators really so one-sided, and is it strictly limited to “paint” alone? Soutine/de Kooning’s final gallery attempts a provisional answer. 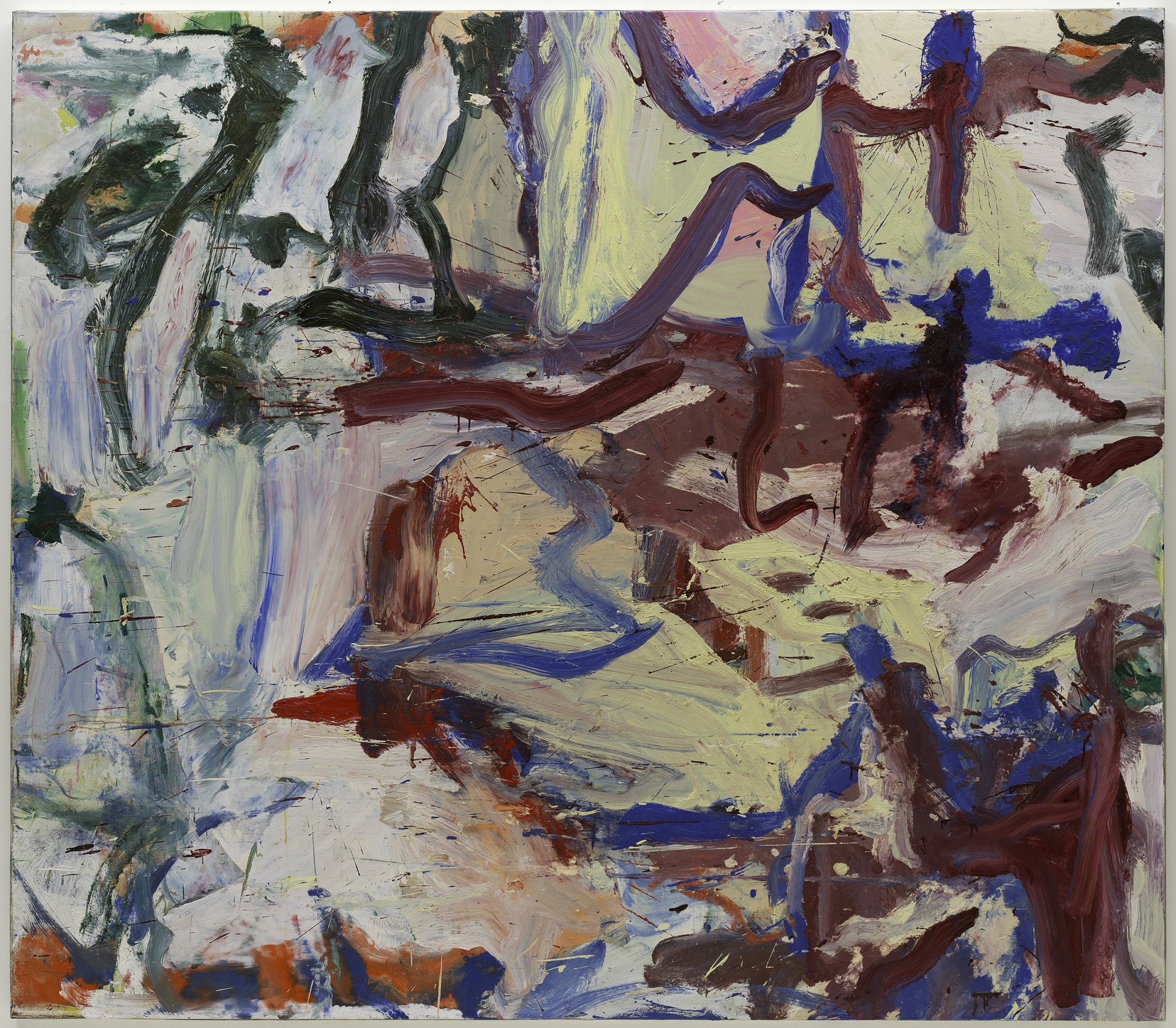 The room begins with four of the “fleshiest” of Soutine’s still lives: hanging carcasses of beef and poultry that the artist painted from life in the late 1920s. (Legend has it that Soutine would douse the motifs in his studio with fresh blood from the butcher shop each day.) Despite their foregrounding of death, these images are so visually lively—glowing, de Kooning might say. Signs of violence, like chains and hooks, are tangentially present, but here Soutine deliberately darkens and blurs the backgrounds and edges so that the carcasses radiate an aura of stillness and peace. It’s as if by insisting so forcefully on the raw material Soutine wants viewers to ponder the spiritual: not the prior death that now lies before their eyes, but the as-yet-unseen future life that such sacrifice nourishes and makes possible.

Time and death, too, are at the heart of de Kooning’s monumental ...Whose Name Was Writ in Water (1975), titled after the epitaph engraved on poet John Keats’s gravestone in Rome. Like water, the imagery is both figural and symbolic: dark green, blue, and violet streaks ripple gracefully across a multihued field of light yellow and rose. The longer you stand in front of it, the more you feel absorbed and immersed—even baptized—in the medium of paint itself. Of course, nothing is permanent, especially not paint. Still, what de Kooning and Soutine manage to do with it is to suggest, gesture at, perhaps even provide a foretaste of what lies beyond death, and outside of time.