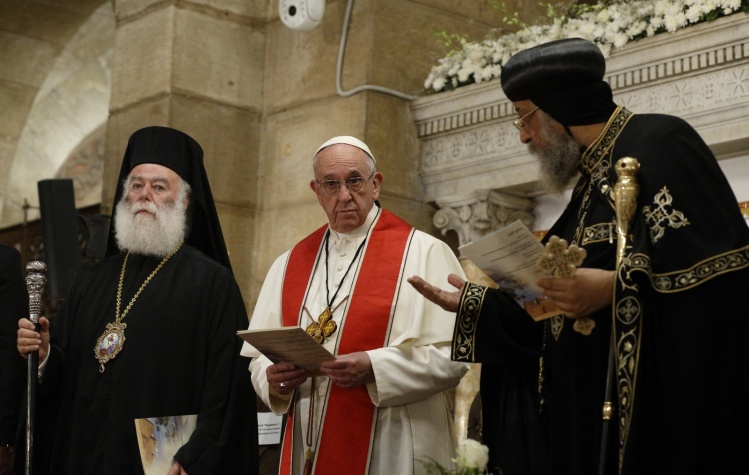 This is the second of a series of posts discussing issues related to the coming review and re-evaluation of Liturgiam Authenticam, the document which governs the translation of liturgical texts.

When Pope Francis and the Coptic Orthodox Pope, Tawadros II, issued a joint statement in Egypt this past week, they landed squarely on an ecumenical issue of great importance: in addition to Pope Francis’s call to strengthen the bonds between the two churches through “the common language of charity” the joint statement said that we must seek to pray together in words that are shared:

Let us deepen our shared roots in the one apostolic faith by praying together and by seeking common translations of the Lord’s Prayer . . .

Common translations have been, and continue to be, one of the important tools of ecumenism. Because the Second Vatican Council valued ecumenism so highly (ecumenism was one of the four goals of the Council itself; see Sacrosanctum Concilium, article 1), the whole reform of the liturgy was undertaken in an ecumenical spirit. Many of our dialogue partners in the English-speaking world welcomed this, and responded with complementary liturgical initiatives in their respective churches.

Some may grumble that we haven’t come far enough in ecumenism, as we still do not share in the Eucharist. Yet much has been accomplished and this should not be taken for granted. For example, one of the outstanding results of ecumenical collaboration on liturgical texts since the time of the Council has been the creation of a common Lectionary. The Catholic three-year lectionary was assembled after Vatican II so that we might enjoy “richer fare” at “the table of God’s word.” It then became the model for the Revised Common Lectionary now used by many churches. An estimated 70% of English-speaking Protestant churches currently use the Revised Common Lectionary, including some in denominations that never had a lectionary before. The development has been revolutionary.

The development of common prayer texts may be counted as an ecumenical success.
sharetweet

As a result of this convergence, in many churches across a spectrum of Christian traditions the faithful hear the same scriptures proclaimed and preached as their Catholic neighbors do, Sunday by Sunday. The shape of the liturgical year and its seasons also have become more widely owned and appreciated across denominational boundaries. This type of renewal would have been unthinkable before the Council.

The development of common prayer texts may also be counted as an ecumenical success. It has drawn our varied assemblies closer together and helped believers to see beyond polemics and come to appreciate the liturgy as a shared treasure. As Lutheran liturgist and ecumenist Eugene L. Brand observed in 1998, “We need to ask ourselves whether our massive attention to those things which divide us has blinded us to the great things we share in common. Next to the Bible, chief among these, surely, is the rite of the Latin church.” As the editor of the Lutheran Book of Worship, Brand gave witness to how close American Catholics and Lutherans had become through shared scholarship and study, which has revived a sense of mutual appreciation of the liturgy as a gift to us all.

The International Commission on English in the Liturgy (ICEL) had at one time engaged in fruitful collaboration with ecumenical partners—first the International Consultation on Common Texts (ICET) founded in 1969, and then the English Language Liturgical Consultation (ELLC) which succeeded it in 1984. These efforts produced liturgical prayer texts that could be agreed upon by many churches—if not entirely, at least closely. This quiet, behind the scenes, ecumenical work was quite successful. Shared elements of the “ordinary of the Mass” in English: Kyrie, Gloria, Credo, Sanctus, and Agnus Dei, along with dialogical responses and acclamations, were prayed together across denominational lines. In many church assemblies, whether Catholic, Episcopalian, Lutheran, Methodist, or others, “The Lord be with you” elicited the same response: “And also with you.”

That was then. Since 2001, however, with the issuance of the instruction Liturgiam authenticam, the Roman Catholic Church officially turned its back on its longstanding partners and the effort to build a repertoire of common texts for the prayer of Christians in the English-speaking world came to a halt. In a talk given to the Centro Pro Unione in Rome after the instruction appeared, Horace T. Allen Jr., a Presbyterian professor of worship at Boston University who was the founding co-chair of the ELLC, said “I will simply now report to you from North America and the English-speaking world that the entire liturgical and ecumenical conversation are gone. Finished. Done.” Maxwell Johnson, a Lutheran professor of liturgy at the University of Notre Dame, at first regarded Allen’s statement as hyperbole, but after the appearance of the translation of the Roman Missal in 2011, he came to agree with it at least as far as liturgical texts are concerned.

Repudiation of the project of common texts was by design. As Bishop Maurice Taylor, then-chairman of ICEL, recounted in his book, It’s the Eucharist, Thank God, “ICEL . . . was ordered to cease having contacts ‘with bodies pertaining to non-Catholic ecclesial communities.’” The order came in 1999 from then-prefect of the Congregation for Divine Worship, Cardinal Medina. Liturgiam authenticam in 2001 made this anti-ecumenical policy decision binding for future translation efforts.

Liturgiam authenticam warns that when translating scriptural material “great caution should be taken to avoid a wording or style that the Catholic faithful would confuse with the manner of speech of non-Catholic ecclesial communities . . . so that such a factor will not cause them confusion or discomfort” (article 40). It is a puzzling statement, because “confusion” and “discomfort” in using common translations is not typical. Yet these are portrayed as grave dangers to be avoided.

“Confusion” and “discomfort” in using common translations is not typical
sharetweet

In a brief nod to ecumenism in article 91, LA stipulates that agreement between Catholic texts and texts of non-Catholic Eastern churches or other ecclesial communities is “desirable.” But it immediately qualifies this in such a way that it assures it will not happen. Shared work on liturgical texts may only be permitted if the other communities have “a sufficient number of adherents” and if “those consulted are capable of functioning as representatives” of those communities.

The first criterion knocks out the non-Catholic Eastern Churches in the English-speaking world, because their communities are comparatively small. The second knocks out the Protestants, because the whole manner of production of ecumenical texts in the Protestant world is not done on that basis. The ecumenical agencies which address texts produce work which is then offered for acceptance to the various denominations and churches. These texts are not produced by “representatives” at a bargaining table, who then impose them on their communities. That is not the way it works. Every success that has been gained has been voluntary. But according to Liturgiam authenticam that is no longer good enough.

Small wonder, then, that Catholic participation in ecumenical translation projects in the English-speaking world has been withdrawn and has not resumed. Liturgiam authenticam has, essentially, forbidden it. This is one of the greatest scandals of that document and its implementation. 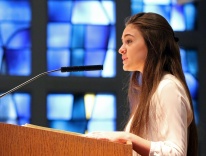 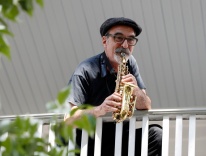 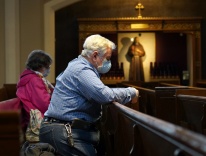