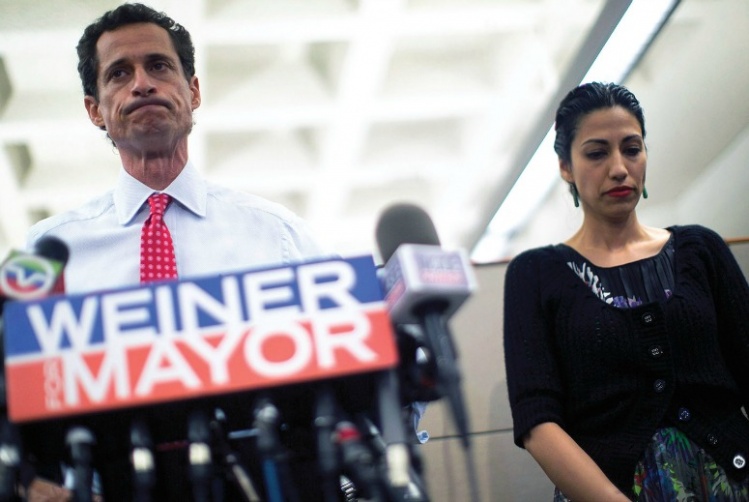 During presidential campaigns I’m often struck by how hard and how well candidates labor to claim our loyalties—and get our votes—by seeming like one of us. But inevitably there comes a moment when the thought of what life must be like on the campaign trail demolishes that carefully cultivated illusion of similarity. The calamity of public attention; the ceaseless need to perform; the mind-numbing repetitions and the trials of patience; the obliteration of privacy and family life; the boundless pressures and sheer physical rigors of every single day: contemplating all that, I know they are not like me. Who in God’s name would want to run for high office? Why do they put up with it? Ambition, of course. But what really is ambition? What kind of force is it, where does it come from, and how does it shape the people it afflicts?

I wish Weiner had set out to answer these questions. But it has narrower aims. The documentary is co-directed by Josh Kriegman, former chief of staff to Anthony Weiner—who, as everyone in America knows, resigned his seat as congressman from New York after it was revealed he had sexted lewd photos of himself to various young women. Parlaying his association with his old boss into unlimited access, Kriegman (along with Elyse Steinberg) sets out to film Weiner’s unlikely political comeback, as he sought to put the disgrace behind him with a run for mayor of New York in 2013.

The filmmakers couldn’t know that revelations of further sexting adventures would soon surface, derailing the campaign from its surprise early front-running status and necessitating a desperate, weeks-long effort at damage control. Disaster for the candidate proves to be a dream for the filmmakers; the pot of gold that lands in Kriegman’s lap reminds one of Andrew Jarecki’s 2003 masterpiece Capturing the Freedmans, where a quirky study of a professional clown morphed, via serendipitous disclosures, into a searing revelation of family dysfunction and sexual abuse.

Given the nature of his sexual peccadilloes, Weiner’s name is a punch line of seemingly inexhaustible mirth, and the filmmakers themselves cannot resist indulging in the joke—one can practically hear the chuckling as a soberly printed epigraph at the outset quotes Marshall McLuhan’s remark that “The name of a man is a numbing blow from which he never recovers.” And while the film’s approach is straightforwardly reportorial, elements of black comedy persist. One scene in a campaign car has Weiner rambling manically about his campaign as he gluttonously shoves down a burger and fries. Another captures the maneuvers of his team as they execute “Operation Pineapple,” hustling the candidate through a McDonald’s to the back-door entrance of an adjacent building where he is to give his concession speech—all in order to avoid a confrontation with the wannabe porn star, Sydney Leathers, who was one of Weiner’s digital dalliances, and is sleazily seeking to capitalize on her notoriety by confronting him live before the cameras.

Weiner dissatisfies on a number of points, and scores brilliantly on one. The “fly on the wall” approach is steadfastly passive; no one is interviewed, there is no commentary, we get nothing of the candidate’s life outside politics. It’s not an approach geared to delivering insight either into Weiner’s past, his need to transgress, the inner workings of his marriage, or any of a number of topics one might reasonably expect a documentary to address.

What it is geared to delivering is a detailed pathology report on a political campaign, and career, that dies right before our eyes. Sinking ship, train wreck, choose your metaphor: Weiner depicts, in lurid detail, the minute-by-minute undoing of a political campaign under extreme duress. And here it is compulsively watchable, in a reality-TV way, serving up one guilty pleasure after another as we watch press and pundits piling on, with comedians Stephen Colbert, Jon Stewart et al. seizing the lurid and hilarious aspects of Weiner’s disgrace (for instance, his online nickname, Carlos Danger) to amp up the mockery. One of many difficult scenes shows Weiner attempting to mollify his team, as his campaign manager and communications director convey their furious sense of betrayal.

The film is also a study in spousal endurance and loyalty. Weiner’s wife, Huma Abedin, is a close advisor to Hillary Clinton, and her plight in certain ways echoes Hillary’s own twenty years ago, during her husband’s very public infidelities. If you expect in Abedin to meet a spouse toughened by hardball politics at the Hillary level, you’ll be surprised and moved by the woman who emerges. Apparently modest, even shy, and almost opaque with loyalty, she seems at once doggedly determined to support Weiner, but also embarrassed, hurt, and appalled. Several times, and pitiably, she shoots the camera a pained and nervous grin, as if to say, I can’t believe this is happening—and I really can’t believe we’re letting you film it.

AS FOR INSIGHTS into Weiner himself, they are few. We get glimpses of a bulldog-like advocacy of passionate political views, and a boisterous, conflict-seeking, no-holds-barred political style. There are glimmers of what might have made him a winning politician, and it’s even possible, in a limited way, to like the man—or, at least, to believe him when he says at one point that he has spent his whole life fighting against bullies. But mostly what we see is a man who just can’t help himself. Whether he is lambasting Republicans on the House floor for quashing a bill for 9/11 first-responders, or haranguing a voter in a kosher deli for daring to judge him, it’s the same incorrigible abrasiveness; and eventually his pugnacity seems less like a commitment to pushing his firmly held views than a symptom of his personality problem.

One fascinating and disturbing sequence captures Weiner’s tempestuous interview with MSNBC talking head Lawrence O’Donnell, an interview that begins with O’Donnell asking, bluntly, “What’s wrong with you?” In proceeding to spar caustically with him, Weiner breaks just about every rule for how a candidate in his precarious situation should behave. Yet he blasts away anyway. Back at home that night, he watches the interview on TV. Huma watches over his shoulder for a moment, and her expression says it all; she’s stricken with shame and disbelief.

Is it bad? Weiner asks.

“It’s bad,” she says. “It’s really bad.” Shaking her head, she tells him to turn it off, and leaves the room.

Weiner nods, yet continues to watch—and as he does, a little smile crosses his face. Even amid the smoking ruins of his campaign, he’s relishing watching himself, reveling in his own combativeness. The contrast between Weiner, rapt with self-love, and the pained embarrassment of his wife could hardly be more trenchant.

Interspersed amid such sequences are excerpts of Weiner being interviewed months later by the filmmakers, after the dust has settled. Asked to account for his reckless actions, he makes some desultory remarks about preferring superficial crowd relations to substantial personal ones. “Politicians probably are wired in some way that needs attention,” he says. “It is hard to have normal relations.” Such detachment borders on self-estrangement; whatever minimal self-understanding Weiner has achieved comes not from looking within, but rather from channeling the views of others looking at him from outside. It is disconcerting to hear a person speculating this way about his own behavior and motivations. Is he talking about himself or some stranger?

“Why did you let us film all this?” the filmmakers ask at one point. Fumbling for an answer, Weiner expresses the wan hope that the documentary might shed light on the whole of him as a person, his accomplishments along with his faults. The true answer—crystal clear to us—is that he seeks attention, any kind of attention, in the helplessly implacable way that a child seeks sugar.

“Thriftless ambition, that wilt ravin up / Thine own life’s means!” Shakespeare wrote. “Farewell the tranquil mind! Farewell content!” Alternating between comedy, spectacle, tragedy, and farce, Weiner portrays a Narcissus so in love with his reflection in the pool of public life, even his own undoing captivates him.