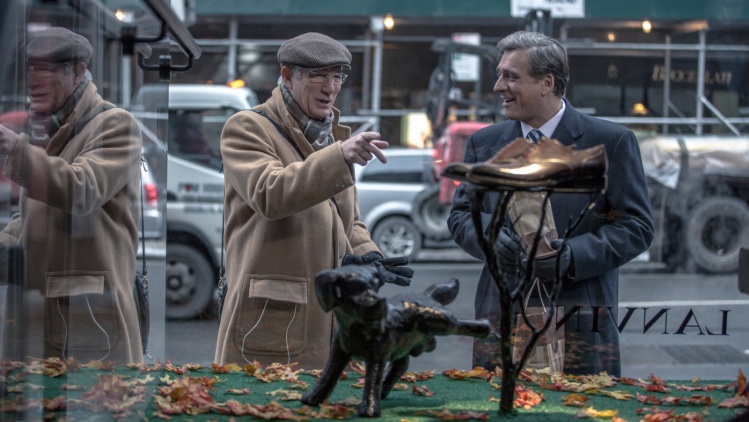 Power is certainly seductive, but the seduction is not always sexual. Not just trophy wives and mistresses but also hangers-on, go-betweens, bagmen, publicists, even chauffeurs and physical trainers—all those behind the scenes partake of the pleasure of being near the mighty. Aside from those looking for profit, such people can be divided into two categories: those who agree with the goals and ideologies of their boss, and those who simply love proximity to the powerful, regardless of moral values. (Contrast the starry-eyed staff of The West Wing with the amoral factotums of VEEP.) The compelling oddity of the eponymous hero of Norman: The Moderate Rise and Tragic Fall of a New York Fixer is that he belongs to the latter category and yet isn’t completely amoral.

Roaming the streets of Manhattan, never without his phone earplug in place, Norman Oppenheimer (Richard Gere) is on the cusp of old age yet untiring in his quest to attach himself to anyone financially or politically important—not in order to put money in his own pocket, but just for the thrill of  linking that person to someone else. Having wrangled a promised seat at a billionaire’s dinner party for a possibly rising Israeli politician, Micha Eshel, Norman sneaks into the host’s townhouse in order to make sure that the invitation was indeed extended. Mistaken as a party crasher, he’s humiliated and ejected, but not before seeing the place card with Micha’s name on it on the dinner table. Reading it, he beams with almost paternal pride. His man is in.

Early in the film Norman’s nephew tells him that, in his pursuit of movers and shakers, the fixer is like “a drowning man waving at an ocean liner.” Norman replies that he’s a good swimmer “as long as I can keep my head above water.” Trouble is, when you swim in the massive wake of an ocean liner, it’s almost impossible to keep your head above water. When Micha Eshel unexpectedly becomes prime minister and greets Norman in public as his “unofficial ambassador to New York Jewry,” the fixer suddenly finds himself a sought-after man for the first time in his career—but also targeted by the Israeli Ministry of Justice as a witness and enabler of Micha’s possible corruption.

The film’s one major flaw is that we’re never sure the corruption is more than possible. The brilliant Israeli writer-director Joseph Cedar deals far too vaguely with this pivotal part of the narrative. It’s been clear from the start that Norman is a hustler who never hesitates to lie in order to schmooze and wheedle, but has he committed financial malfeasance? What specifically does the Ministry of Justice uncover? Since we’re never clear about this, we can’t tell who is using whom, or if the investigator is targeting Micha because of his politics. In the 1981 Paul Newman movie Absence of Malice, we’re shown specifically what a U.S. federal prosecutor discovers and what he invents, so we know just where the targeted hero stands morally. This is impossible in Norman, and this lack of clarity hobbles the drama.

What brings resonant, unsentimental pathos to the movie is the genuine bond of friendship between Norman and Micha, a bond rising out of the very different isolations of each man. Norman is isolated because he is socially unmoored and barely domiciled as he wanders around the city, looking for Wi-Fi and subsisting on canned herring and crackers for nourishment. In contrast, Micha, a Jewish Prince coming into his kingdom, is internally isolated because he is so riveted in place socially and politically: loudly denounced by enemies in the Knesset, fawned upon by admirers, hounded by the media, lectured on tactics by his handlers, and lectured in bed on familial responsibility by his wife. (In Cedar’s films wives and girlfriends are both nurturing and brutally honest). But when Micha was at a low point in his career, Norman bought him an expensive pair of shoes, and this endeared him to the politician because the purchase seemed at the time free of self-seeking. But was it? Norman’s greed is for sheer connection to power, not money.

Norman’s greed is for sheer connection to power, not money
sharetweet

The acting problem confronting Richard Gere was to shrink himself into his role. He’s been an A-list talent for forty years, a studly wise guy in his youth (Looking for Mr. Goodbar, American Gigolo), a silver-fox man of power in middle age (Arbitrage, Pretty Woman)—and just the sort of mover-shaker that Norman pursues. But as Norman, Gere must conceal the charisma that most of his other roles have put on display. The fixer never dominates but constantly petitions. Gere shows that he well understands the thin-skinned, ground-down yet resilient nature of a quester who has encountered all too many obstacles. If his performance falls just a bit short of total success, it’s because he’s still a shade too robust and movie-starish to fully convey that Norman, whatever his temporary success, is actually approaching the end of the road.

The other movie star in the cast, though most Americans won’t know it, is Lior Ashkenazi. Renowned in Israel, he played the lead role in Cedar’s last film, Footnote. There he was a middle-aged Talmudic scholar, bearded, overweight, and seething with ambition and resentment. As Micha, he is a clean-shaven, sleekly handsome, and genuinely glamorous in the way that some politicians are. Ashkenazi can burnish the most straightforward statement with irony, captivate a room with his fervor before breezily walking away without a backward glance, and convince us that such a man can sincerely love a supporter before feeding him to the wolves of justice and journalism. Early in the movie, Micha claims Norman’s attention by quoting Bernard Shaw: “You see things and say ‘why?’ but I dream things that never were and I say ‘why not?’” Inspirational, right? But what Norman perhaps doesn’t know is that Shaw (in Back to Methuselah) put that sentence in the mouth of the Serpent who gets Adam and Eve kicked out of Eden. Ashkenazi’s performance encompasses both the idealism and the fecklessness of that aperçu.

Cedar brilliantly stages his complex, flawed, absorbing script. When Norman first approaches Micha outside a deluxe shoe store, Cedar keeps the camera behind the storefront window so that we can’t hear the fixer’s pitch, but the gestures of both men give us an eloquent pantomime of courtship. As in Footnote, Cedar isn’t content with conventional close-ups but zeroes in on a single facial feature that sums up a character’s objectives. When a government investigator interrogates Norman, her eyes fill the screen as she tries to penetrate his defenses. And, in an unforgettable scene, when the new prime minister praises Norman at a VIP reception, the director freezes the action, turning everyone in the room except our hero into a mannequin, while the fixer, bemused by his new good fortune, wanders among the cognoscenti. Then Cedar cuts to an overhead shot in which the now-tiny Norman appears lost in a labyrinth of well-dressed bodies. The effect is so startling that, at the screening I attended, a viewer murmured, “This must be a dream.” He was wrong in one way, right in another. Norman is in a real room among real people. But, indeed, he is lost in a dream.