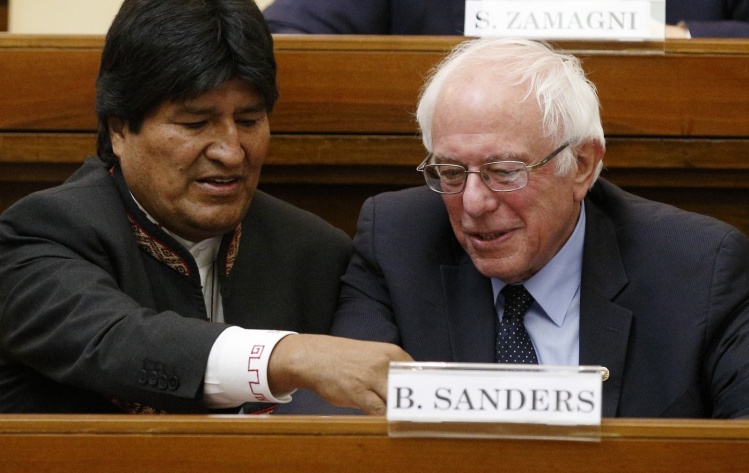 On the February 9 Meet The Press, Chuck Todd told Bernie Sanders: “You stood behind Evo Morales when he clearly went, you know...” Had he finished that sentence, it might have been with the word “tyrannical.” Todd added that the former Bolivian president and leader of the Movement for Socialism (MAS) party “tried to violate his country’s constitution.” The implication was clear: Sanders had defended a left-wing dictator, and many voters wouldn’t like it.

Yet the story of Morales’s presidency and downfall is more complicated than Todd suggested. On November 11, 2019, Morales resigned from the presidency under pressure from the Bolivian military. His victory in the October 20 elections had been thrown into question by accusations of fraud. After the country’s Electoral Court refused to update results for twenty-four hours before declaring Morales the winner, the Organization of American States declined to recognize the election results. It then launched an investigation that ultimately claimed to have uncovered various irregularities, including the falsification of signatures and the redirecting of voter data onto hidden servers. (Some activists dispute the OAS findings.)

Even though Morales called for new elections—and even though his term of office was not scheduled to end until January—anti-Morales protesters flooded city streets and several people died in the ensuing violence. Eventually police forces joined the protestors, congregating outside the presidential palace in La Paz. Morales fled to Mexico, and on November 12, Jeanine Áñez, a right-wing Morales rival, was sworn in as interim president. New elections are now scheduled for May.

Sanders’s initial statements focused on Morales’s ouster. On November 11, Sanders tweeted: “I am very concerned about what appears to be a coup in Bolivia, where the military, after weeks of political unrest, intervened to remove President Evo Morales. The U.S. must call for an end to violence and support Bolivia’s democratic institutions.” (He repeated these sentiments on November 18.) To date, Sanders is the only presidential candidate to use the word coup to describe what happened on November 11—the same word used by Morales.

But Sanders has also praised Morales’s policies. During the presidential debate hosted by Univision, host Jorge Ramos suggested that many believe Morales was becoming a dictator, and that his removal was therefore justified. “I don’t agree with that assertion,” Sanders responded. “I think Morales did a very good job in alleviating poverty and giving the indigenous people of Bolivia a voice that they never had before.”

Sanders was right: Morales’s tenure has brought economic prosperity to Bolivia and was a boon for its indigenous people. Between 2006 to 2018, extreme poverty in Bolivia dropped from 38 percent to 17 percent. Morales also engaged in land redistribution—a signature policy of the Latin American left that addresses a longstanding source of inequality. A new constitution, promoted by Morales and ratified in 2009, grants greater autonomy to Bolivia’s indigenous communities. (Morales hails from the Aymara, an Andean pre-Columbian nation.) Morales avoided the excesses of other Latin American socialist experiments. He nationalized the oil and gas industries and renegotiated contracts with foreign conglomerates, but kept most other sectors private and avoided reckless overspending. He used the revenue from oil—buoyed by the 2000s commodities boom—to pay for schools and other infrastructure.

Morales has his critics, including indigenous activists who feel he sided with the fossil-fuel industry at the expense of the environment and those who think his government threatened free speech by denying media licensing. Yet the true cause of Morales’s downfall was continuismo, a perennial temptation for Latin American presidents both left and right. This term refers to the tendency among Latin American leaders to push against term limits.

Presidential term limits are a sensitive issue in Latin America. Especially after the democratic wave of the late 1980s and early 1990s, many Latin American countries decided that the best way to prevent new dictatorships from forming was to establish firm legal restrictions on reelection. Anytime a president tries to undo these restrictions, he or she is bound to be met with public protest (e.g., Paraguay in 2017). Bolivia’s 2009 constitution—championed by Morales—prohibits a president from running for a third term. Under the 2005 constitution, Morales won by a landslide; under the 2009 constitution, he was able to run for two more terms. In 2016, he lost a referendum that would have done away with term limits; he contested the results in the Supreme Court, which overturned the constitution and the referendum, and allowed Morales to run for office indefinitely.

In short, Sanders did not defend a dictator: he defended a successful leader who shares his socialist vision but lacked sufficient respect for democratic norms. Yet the circumstances of his forced resignation suggest that Morales is not the only one in Bolivia guilty of this lack of respect.