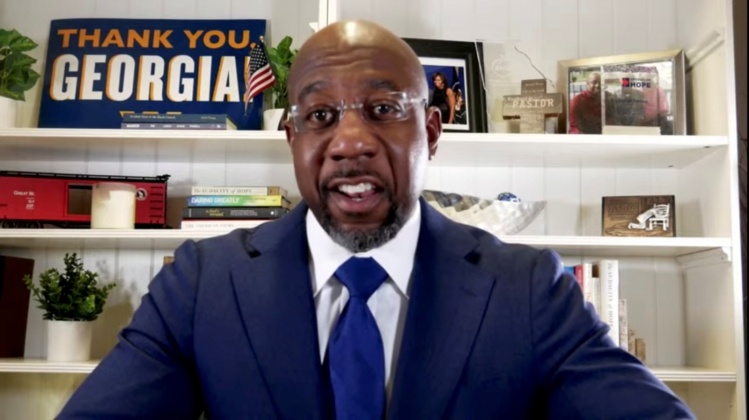 Faith was a defining feature of the Georgia special-election campaign that helped give Democrats control of Congress and the White House for the first time since 2011. The Black church and progressive religious activism took center stage, helping make Rev. Raphael Warnock—the son of a sharecropper who grew up in public housing—the state’s first Black senator. The pastor of Atlanta’s Ebenezer Baptist Church, where Rev. Martin Luther King Jr. once presided, Warnock is heir to generations of Black liberation preachers. It is a distinguished lineage. From Howard Thurman’s seminal work, Jesus and the Disinherited (1949), to A Black Theology of Liberation (1970), to The Cross and the Lynching Tree (2011) by Warnock’s mentor James Cone, this prophetic tradition understands the Gospel through the prism of Black suffering and oppression wrought by centuries of white supremacy and systemic racism.

Catholic liberation theology emerged from Latin America as a response to violence, extreme inequality, and poverty; in similar yet distinctive ways, Black liberation theology grapples with slavery, Jim Crow, and the contemporary injustices of voter suppression, mass incarceration, and police brutality. It’s an understatement to say that the discomforting truths illuminated by Black liberation preachers clash with the predominant strain of white Christianity, which largely focuses on personal behavior and individual salvation at the expense of structural injustices and social sins. This contrast played out during the campaign in a state where the intersection of race and religion shapes debates over values, politics, and identity.

Snippets of Warnock’s sermons became fodder for attack ads from his Republican opponent, Sen. Kelly Loeffler. A white Christian businesswoman, Loeffler had earlier decried what she called the “anti-faith attacks” against conservative Supreme Court Justice Amy Coney Barrett. But Loeffler showed no reservations in using faith as a political weapon against Warnock. Loeffler and her GOP allies seized on a thirty-second clip from a 2011 sermon the pastor gave in which he references the Gospel of Matthew, declaring, “America, nobody can serve God and the military. You can’t serve God and money. You cannot serve God and mammon at the same time. America, choose ye this day who you will serve.” Florida Sen. Marco Rubio, who frequently tweets Bible verses, circulated the clip, commenting that “these and even crazier things is what the radicals who control the Democratic party’s activist and small dollar donor based believe.” President Trump called Warnock “the most radical and dangerous left-wing candidate ever to seek this office,” during an election-eve rally in Georgia. “He does not have your values,” the president said.

The orchestrated efforts to portray Warnock as a Marxist, an unpatriotic radical out of touch with Christian values, only make sense if you whitewash the Hebrew prophets and the ministry of Jesus from the Bible. Small government, lower taxes, and a strong military are a manufactured holy trinity that fuel the political and religious imagination of many white Christians. But this orthodoxy is ideological, not authentically Christian. In contrast, Warnock, who said he will continue to preach at Ebenezer Baptist Church on Sundays, embraces a Christianity that, in the words of Pope Francis, goes to the “peripheries.” In the United States, you can’t start from the peripheries without acknowledging the ways that white supremacy has shaped laws and institutions that continue to harm people of color. As Warnock put it in a eulogy last summer for Rayshard Brooks, a young Black father of four shot and killed by an Atlanta police officer in a Wendy’s parking lot:

Warnock...embraces a Christianity that, in the words of Pope Francis, goes to the “peripheries.”
sharetweet

This country has become too accustomed and comfortable with Black people dying. If Black Lives Matter, then we must do all we can to fight for our lives, fight this virus: COVID-19. But we had to come together because there’s another virus in the land. And, it’s killing people. There’s COVID-19 and then there’s COVID-1619. They are both deadly. And in this land, we’ve been trying to beat back this virus since 1619 when about twenty slaves or so arrived in Jamestown, Virginia. Mass incarceration is the latest mutation of an old virus called racism. And that’s not just a social issue or a political issue. That’s a moral issue. That’s a spiritual problem.

Along with renewed attention to the power of Black liberation theology, Warnock’s win is instructive for shifting the narrative about faith in politics, especially in red states where religion is a central player. The Religious Right has spent decades investing in organizing faith leaders and conservative voters. White Evangelicals and white Catholics played a decisive role in claiming the mantle of “values voters” during the George W. Bush era. Donald Trump relied on these voters to win the White House. It’s true that religious progressives attract more media attention than in the past. Democrats such as Pete Buttigieg and New Jersey Sen. Cory Booker spoke eloquently about their faith during the presidential race, at times pointedly challenging the hypocrisy of conservatives who claim to own the moral high ground on issues. The Biden campaign had a robust religious outreach operation. But the Democratic Party and liberal funders still too often pay attention to religion only when an election cycle comes around. Transactional relationships aren’t built to last. Long-term investment and infrastructure building with a diverse coalition of religious voters and faith communities are essential.

Stacey Abrams, the former Georgia House speaker who lost a razor-thin 2018 gubernatorial race, understands this. The leading force behind Georgia’s turn to blue, Abrams founded Fair Fight and the New Georgia Project, organizations that redefined the state’s political calculus with a massive effort to register new voters, especially voters of color. In 2018, that effort registered more than two hundred thousand new voters, and it increased to eight hundred thousand new voters this year. “My faith is central to the work that I do, in that I not only hold Christian values, but my faith tradition as a Methodist tells me that the most profound demonstration of our faith is service,” Abrams has said.

Reaching new voters, especially in rural areas, begins with a faith connection. Faith in Public Life, my organization, has staff on the ground in Georgia working with religious leaders and people of faith every day of the year. They visited rural churches and made sure people had rides to the polls. “We spread out from Augusta and hit all the rural counties,” my colleague Shavonne Williams told Reuters. “Many didn’t want to be political, or they thought it didn’t make a difference. We educate and encourage. We remind them that Jesus got involved. That seems to get through.”

Rev. Warnock’s victory doesn’t have to be an outlier. A progressive, prophetic religious approach to justice and politics can be a winning ticket across the country. A new moral majority—multiracial and interfaith—can begin to reclaim faith from the grip of reactionary white Christians who have defiled the Gospel since long before Trump’s election. The pro-Trump rioters who stormed the Capitol last week, many holding “Jesus Saves” signs and waving Confederate flags, stand in the way of making that future a reality. “A new America is emerging and that’s why you see the expression you saw yesterday,” Warnock said in an interview a day after the insurrection in Washington. “It is the desperate, last gasp of an old problem that knows it’s on its last breath.”

But Trump is a symptom of deeper ills that will not disappear when he leaves office. Believing in that new America will require committed donors who understand the power of faith as a catalyst for social change, and a tangible commitment to organizing. Faith demands hope, but it also needs a strategic plan.