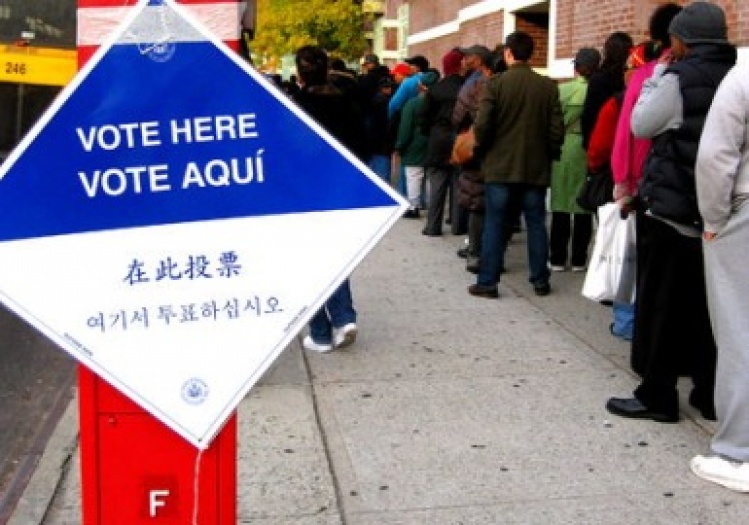 President Barack Obama recently joined former presidents George W. Bush, Bill Clinton, and Jimmy Carter at the President Lyndon Baines Johnson Library in Austin, Texas, to commemorate the fiftieth anniversary of the passage of the 1964 Civil Rights Act. It is no exaggeration to say that the Civil Rights Act, and the Voting Rights Act of the following year, were the most transformational political developments of the past century in the United States. It was a difficult, often violent struggle, but in the end what was implicit in the nation’s founding documents finally became explicit in federal law. The Civil Rights Act made it illegal to discriminate on the basis of race, color, religion, sex, or national origin in public accommodations. The Voting Rights Act addressed discrimination in elections, ultimately dismantling a system that had shut African Americans out of voting booths for nearly a hundred years.
A few days after his Austin speech the president was in New York City to speak to Rev. Al Sharpton’s National Action Network, and he took that opportunity to remind his audience that the struggle for equal rights never ends and to call attention to a disturbing political development. “The right to vote is threatened today in a way that it has not been since the Voting Rights Act became law,” Obama said. “Across the country, Republicans have led efforts to pass laws making it harder, not easier, for people to vote.” With uncharacteristic severity, Obama has called the effort to restrict voting “un-American.”
The president’s words were not partisan hyperbole but an accurate description of what some Republican governors and legislatures have been doing. In 2006, the Senate reauthorized the Voting Rights Act by a 98–0 vote, a rare example of bipartisan consensus. Unfortunately, that did not stop the Supreme Court’s five Republican-appointed justices from ruling Section 4 of the act unconstitutional last June. In doing so, the Court removed the requirement that states with long histories of voting discrimination get preapproval from the Justice Department before changing their voting regulations. As a consequence, Republicans in nine states have pushed through laws with strict photo ID requirements as well as a variety of limitations on early voting, extended voting hours (including weekends), same-day registration, and absentee voting. All of these restrictions would disproportionately affect minority voters. Many African Americans, especially those living in cities, do not have the state-issued photo IDs, such as driver’s licenses or passports, required by the laws. Many cannot get to the polls until early evening. Sunday voting, often organized around church services in African American communities, is especially important for increasing turnout. How can prohibiting Sunday voting, as Ohio has just done, be anything but discriminatory?
This concerted effort to narrow the voting base has been especially prominent in so-called swing states such as Ohio, Wisconsin, and North Carolina. The Justice Department has already filed lawsuits in North Carolina and Texas to prevent dubious restrictions from taking effect. Attorney General Eric Holder has made it clear that protecting access to the ballot box will be a priority, and he has even called for expanding the voting rights of felons who have paid their debt to society. That is not likely to be a popular cause, but it is a just one.
Whatever one’s political allegiance, transparently partisan attempts to undermine the Voting Rights Act should be worrisome to all Americans. Republicans have long maintained that stricter regulations are needed to curb voting fraud, but evidence of such corruption is almost nonexistent. Now Republicans argue that limiting access to the polls is needed to bring about greater “uniformity” in how voters in different parts of a state are treated. Yet that too sounds like a solution in search of a problem. When it comes to voting, the first priority of those in both parties should be removing unnecessary obstacles and encouraging as many Americans as possible to exercise the franchise. As Fr. Theodore Hesburgh, former chair of the U.S. Civil Rights Commission, once put it, “Voting is a civic sacrament.”
Republican legislators should think twice before stifling the voice of the people they seek to represent, for even if partisan advantage is won in the short term, alienating the majority is a sure route to political irrelevance in the long term. Some within the party recognize that danger. Wisconsin state senator Dale Schultz has suggested that his fellow Republicans are digging their own grave in this reckless effort to restrict the voting rights of others. “Making it more difficult for people to vote,” he said, “is not a good sign for a party that wants to attract more people.”
Democracy is first and foremost about the challenge of self-government: citizens not only have the right to select the nation’s lawmakers but also have a responsibility to participate in making those decisions. Trust and faith in the electoral process is as essential as it is fragile. So it is especially disheartening when democratic means are used to ensure undemocratic ends, as these new laws attempt to do. You might even call it un-American.
Published in the May 2, 2014 issue:
View Contents
Tags
Domestic Affairs
Editorial