The View from Dover 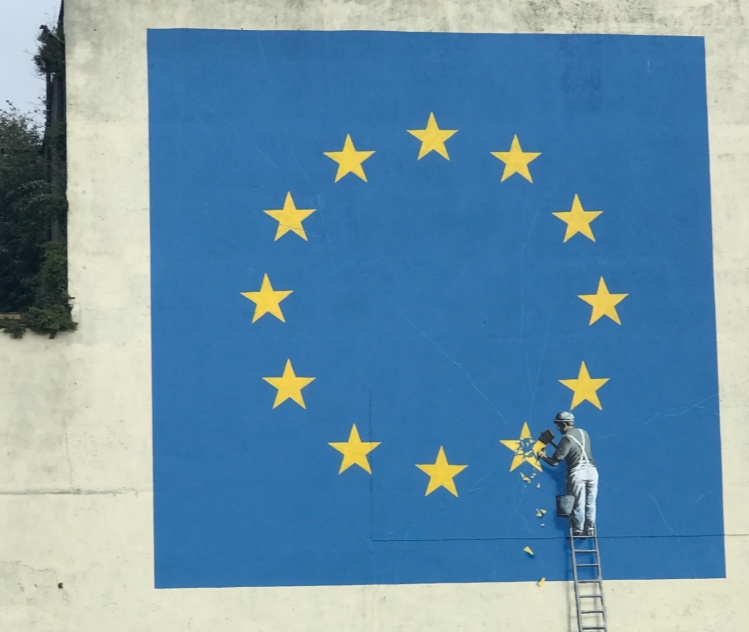 A mural by street artist Banksy on a wall in Dover, UK (Jay Galvin / Flickr)

Britain has many historic towns, but few display their history so clearly as Dover. Often dubbed “The Gateway” of Britain, Dover sits on the far southeast coast of England, her iconic white cliffs stretching far along the coast, welcoming ferries from Europe. At the narrowest point of the Dover Strait, the town sits only 20.7 miles from Calais, and on a clear day one can easily see the French port from Dover beach. This location, which has given Dover a unique role in British history, may soon make the town uniquely vulnerable to the effects of a no-deal Brexit.

Evidence suggests humans have occupied Dover for well over three thousand years. Major road construction in 1992 revealed a nearly intact Bronze Age boat, which could be the oldest intact seagoing vessel in the world, now housed in the extensive Dover Museum. A thousand years later, the Romans considered Dover a crucial strategic location, constructing multiple forts and other dwellings, including the well-preserved Dover Roman Painted House, the site of the most expansive Roman frescoes north of the Alps. In 1066, the town was sacked by William the Conqueror, and by the time of Henry II, work had begun on Dover Castle, now the largest surviving castle in England. Multiple churches were built and restored, including St. Mary in Castro, which is over a thousand years old and is still used for services today.

Over the medieval period the town solidified its crucial role, becoming a key port and access route to Europe and beyond, and playing host to a dizzying range of monarchs, noblemen, and foreign leaders. The town became a critical line of defense against a potential Napoleonic invasion in the early nineteenth century and served the same crucial role in the wars of the twentieth century. The first bombs to fall on England fell close to Dover Castle in 1914, and the town’s strategic position made it a key focus of Hitler’s “Operation Sea Lion,” the planned invasion of Britain in World War II. While the invasion was never attempted, the East Coast was shelled so heavily during the war that the area surrounding Dover earned the grisly nickname “Hellfire Corner.” Multiple covert command centers and fortifications were built into the white cliffs, and during the Cold War bunkers were developed for use by senior regional figures in case of a nuclear strike.

Dover’s location remains important, now for commerce rather than war. Dover Port continued to grow throughout the twentieth century, and is now one of the busiest passenger ports in the world. Last year, the port handled nearly 5 million vehicles and well over 11 million passengers. Its trade has also continued to grow, and now an astonishing 17 percent of the United Kingdom’s trade goes through the Port of Dover. It remains the “Lock and Key” of Britain. But away from the busy port, much of the town itself stands in a sorry state. On the once-grand high street, shopfronts now stand bleak and deserted. Some properties have been empty for nearly fifteen years. On the seafront, the walls and windows of houses are scarred by the black fumes poured out by hundreds of ferries. Housing prices were once some of the lowest in the UK, and though they have lately risen somewhat, they’re still far below those of even relatively close areas, such as Deal. In 2017, an informal poll of Britons cruelly dubbed Dover the worst place to live in the United Kingdom.

In fact, Dover has seen some positive changes over the past few years. Its Western Docks have been undergoing a substantial development, funded in no small part, it should be noted, by the European Union, in order to provide new areas for leisure and retail as well as extra space for shipping. Behind the seafront Gateway apartments, a new retail development has recently been completed. It’s also the case that Dover’s remaining problems are hardly unique. A Guardian analysis reported in January that one in twelve UK high-street shops has closed in the past five years, indicative both of the decline of retail and of the effects of austerity on consumer spending. Coastal towns are especially affected, with Eastbourne and Blackpool suffering from the second and third greatest high-street reductions in England and Wales—Eastbourne lost more than one fifth of its high-street stores. Against the backdrop of these stark changes, one could argue that Dover has been improving just as one might have expected it to fall further behind. While its present situation is still in many ways unbefitting of a town of such historical importance, Dover is slowly on the rise.

At least for now. A dark shadow looms over Dover: the threat of a no-deal Brexit. Back in March, Parliament voted narrowly to reject any no-deal option, and last-minute negotiations in April succeeded in delaying Brexit till October. The threat of a “cliff-edge” departure is no longer as imminent as it has been. But with the Conservative government in disarray, and (thus far) limited success in cross-party talks, doubts have been voiced as to whether Britain will be able to meet the new October deadline with any sort of plan. Should the EU decline to continue extending the deadline, Britain may have no choice but to leave without a deal. And that could be devastating for Dover.

The predictions vary, and the relevant numbers are fiercely contested, but a significant body of research suggest that economic impact on Dover would be severe. The Port of Dover reports that trucks arriving from the EU now take around two minutes to process, while non-EU vehicles take as long as twenty minutes or more. At present, barely 1 percent of vehicles are non-EU, and yet the roads around Dover are still extremely busy. The events of summer 2016, where motorists were delayed for up to fourteen hours due to French understaffing at customs, showed how vulnerable the system already was. But the impact of a no-deal Brexit could be far worse. Even if the passage of trucks could be highly streamlined, reports show that a delay of only two minutes per truck could cause queues of up to seventeen miles. Unpublished information presented to MPs and obtained by the Financial Times calculated that such queues could lead to delays of as much as six days, reaching a situation of “no recovery,” or “widespread permanent gridlock.” And without such streamlining, the consequences would be even more severe. A twenty-minute delay could lead to tailbacks of over 70,000 vehicles. The queues could last for weeks or even months, and Dover’s key roads would be brought to a near standstill. Tourism would slump as the roads in and around Dover became hopelessly clogged. Key areas of development, such as the St. James Retail Park, stand right next to key roads to the port. Pollution could increase to highly damaging levels. In effect, the proud town of Dover could be reduced to one long, dirty, and apparently unending traffic jam. For the Port it would be a severe logistical challenge and for the country an embarrassment, but for the town itself it would be a potential death sentence.

The situation is, of course, highly uncertain. No one knows exactly what a no-deal Brexit would look like, and there’s still a good chance it won’t happen. Theresa May remains determined to pass some form of her own Brexit deal, which would seek to provide a more controlled exit. Such a deal would probably (though not definitely) streamline customs requirements for the port. But whether it would be enough to avoid gridlock is uncertain. And with MPs having rejected Theresa May’s deal three times in the past year, its chances of passing without major changes seem slim.

It would be melodramatic (and premature) to claim that Dover will cease to exist in the event of a no-deal Brexit. It should be noted that the majority of Dover residents voted in favor of Brexit and believe that Dover will survive, or even thrive, after a split from the European Union. Many of the available statistics may suggest that they are wrong about this, but Brexit is finally about identity, not numbers. Its proponents argue that it will safeguard and increase Britain’s independence, and protect its ingenuity and character. Those are all hard things to measure. But it would be a cruel irony if the first blow in this quest for British identity lands squarely on a town that, in many ways, exemplifies it more than any other.