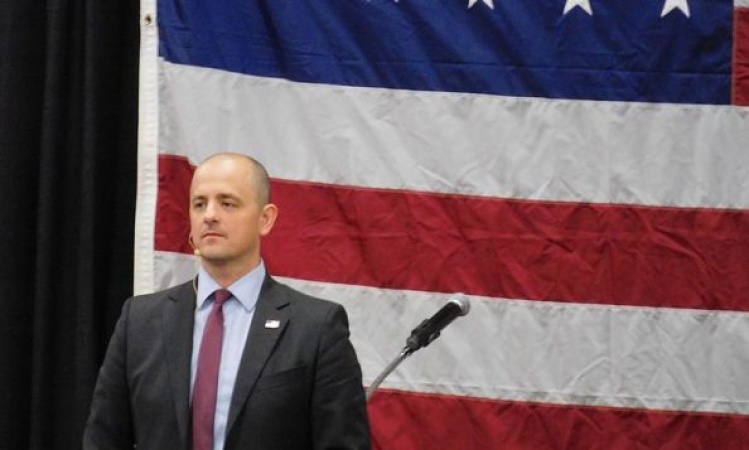 With national vote totals of the 2016 election approaching their final numbers, one state is the clear outlier: Utah. Third-party candidates received 27 percent of the vote, more than double the percentage of the next closest state. Even in raw numbers, Utah’s third-party vote is impressive, with more voters choosing a third-party candidate in relatively small Utah (~304,000) than in the large state of Florida (~297,000). What accounts for this? Insurgent conservative candidate Evan McMullin.

Despite campaigning for a mere two months, McMullin convinced almost 22 percent of Utah to vote for him. More importantly, virtually all of these votes came from Republican-leaning voters: Trump pulled only 45 percent of the vote, while Sen. Mike Lee received the predictably large 68 percent of the vote on the same election day. The proportion voting for the Democratic candidates for president (27.5 percent) and the Senate (27.1 percent) were the same. Thus almost all of McMullin’s votes would otherwise have been Trump voters.

We covered the situation in Utah as it developed in September and October (here and here), describing the ways in which Trump was uniquely unappealing to Mormon voters and outlining a path forward for a possible McMullin victory in Utah. Crucial to this was the political mobilization of Mormon voters, a feature studied last decade by renowned political scientist David Campbell. Here was the view from September:

Already a real voting bloc, due to cultural distinctiveness, social cohesion, and geographical concentration, Mormons have other features that set them apart as a prime electoral target. Describing their voting bloc as “dry kindling,” his argument demonstrates that Mormons’ “intensive church involvement builds social capital and civic skills, both of which contribute to the capacity for political mobilization,” while “the organization and teachings of the Mormon Church facilitate adherence to the instructions of LDS leaders, including on political matters.” Campbell hastens to add that “the flammability” of this dry kindling “is due to the relative infrequency with which Mormons are mobilized by their church leaders.” For electoral politics, therefore, “Mormons potentially matter a lot, but not too often.”

With the election now behind us, I reached out to Campbell, the Packey J. Dee Professor of Democracy and chairperson of the Political Science Department at the University of Notre Dame. Most know him as the co-author (with Robert Putnam) of the award-winning and indispensable American Grace: How Religion Divides and Unites Us. Most recent among his many other scholarly publications is Seeking the Promised Land: Mormons and American Politics (with John Green and Quin Monson).

What follows is Campbell’s assessment of the election in Utah, the role of his “dry kindling” theory, and the relative appeal of McMullin, Trump, and Romney for Mormon voters.

Michael Peppard: When you heard that Evan McMullin was entering the presidential race in Utah and some other states with sizable Mormon populations (e.g., Colorado), what were your expectations?

I would have guessed that Gary Johnson, the Libertarian candidate, would find traction but, of course, he ended up falling flat. Among Mormons, Johnson was always a hard sell because of his support for the legalization of marijuana, although he might have been able to overcome that with the right message. However, given that Johnson failed to take off, it is not perhaps not surprising that a candidate with conventionally conservative views—not to mention his Mormonism—would find support among Mormons.

As for my expectations, once McMullin started to receive attention I was not surprised that he began to eat into Trump’s support. Had the election been held immediately after the Access Hollywood tape became news, he would have done even better, as that was roughly the time at which his support in the polls seemed to peak. But as time passed, apparently enough Republicans “came home” to vote for Trump.

MP: Do you think that the McMullin campaign was indeed a kind of test of your theory? If not, why not? Did the rejection of Trump by the governor, lieutenant governor, Sen. Lee, Rep. Love, and The Deseret News provide enough of a spark for the kindling in Utah, or would something official from the LDS leadership have been necessary?

DC: The McMullin campaign is not exactly a case of what we call the “dry-kindling effect,” although it is still revealing of political activity among Mormons, and perhaps other groups too. Our theory that Mormons are like “dry kindling” is really about explaining how they respond when political activity on a given issue is explicitly encouraged by the top levels of LDS leadership, such as with Proposition 8 in California in 2008. Mormons’ high (although not complete) degree of political uniformity, their tight-knit social networks, and their deep-seated belief in “following the prophet” make for a potent combination that can ignite rapid and intense mobilization. In this case, we saw Mormons respond to McMullin, but without the explicit endorsement of LDS leaders, which would have been prohibited by the LDS Church’s tax-exempt status anyway. Thus, it provides an example of Mormon mobilization in the absence of either explicit direction from church leaders or the pull of partisanship. The fact that McMullin did as well as he did is a testament to the political energy within LDS circles.

MP: How did McMullin's appeal to Mormon voters differ from that of Romney?

DC: Someone voting for Mitt Romney was voting for a president; supporting McMullin was casting a protest vote. While there were far-fetched scenarios about McMullin eventually being chosen by the House of Representatives, they were hardly serious, and so it is difficult to believe that many voters cast a ballot for McMullin because they expected such an unlikely sequence of events. By voting for McMullin, conservative Republicans could avoid voting for Trump while still supporting a conservative candidate—essentially, a Republican. They could also keep their partisan conscience clear by not voting for Hillary Clinton.

However, protest votes are nonetheless an important form of political expression. President-elect Trump can look at the election returns and see that he has relatively soft support among Mormons, a group that is arguably the most loyally Republican under normal circumstances.

For many Mormons, keep in mind that a vote for Romney was also a matter of affirming their religious identity. Here was a member of their tribe within reach of breaking the “stained glass ceiling.” Had he won, it would have marked a new level of acceptance for Mormons within America. Given that support for McMullin was a protest vote, I suspect that most Mormons did not feel that voting for him was an expression of an ethnic-like solidarity as it might have been with Romney.

MP: A lot was made of the Mormon electorate as "the conscience of the Republican party" with respect to Donald Trump, whom Mormons supported at dramatically lower numbers than past GOP candidates. How do you interpret the Mormon rejection of Trump? Or do you think it was not a “Mormon” rejection at all, but rather due to some other constellation of factors in Utah?

DC: Mormons’ aversion to Trump was very much rooted in their religion. Although, in saying that we should keep in mind that 61 percent of Mormons nationwide voted for Trump. To be sure, this is lower than his support among white evangelicals in 2016, and lower than Mormons’ past support for Republican presidential candidates. But it still means that three out of five Mormons voted for him. Still, to the extent that he underperformed among Mormons, there is good reason to think that their religion is an explanation.

His talk of banning Muslims was no doubt concerning to members of a religious minority that, historically, has faced persecution, including by federal authorities. Likewise, his rhetoric on immigration runs counter to Mormons’ moderate views on immigration policy, often informed by missionary service either in other countries or among immigrant populations within the United States. Finally, Trump’s crude comments—especially those that were sexually charged—are anathema to many Mormons, many of whom have a strong belief that political leaders should be morally virtuous.

In the absence of an attractive third-party candidate, Mormons’ aversion to Trump would have either led to a decision to stay home on Election Day or to hold their noses and vote for him based on his party (a few would have voted for Clinton, but given the depth of their Republican identification, not many). In those states, like Utah, where McMullin was on the ballot, Mormons had the option of casting a protest vote. Clearly, many did.

In other words, Mormons nationwide would have shared the same aversion to Trump, but their ability to act on it was only possible where voting for McMullin was an option. In that sense, the expression of Mormons’ dislike of Trump was made possible by the choices on their ballot. It is a case study of how, in politics, the choices placed before voters matter.