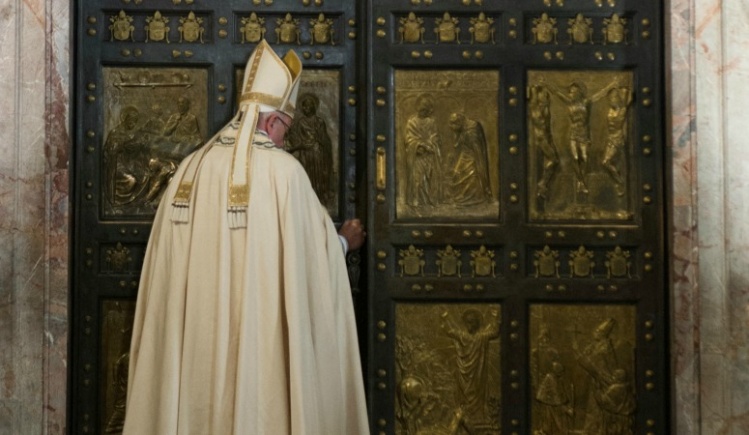 Pope Francis’s plan for reforming and renewing the worldwide Catholic Church is becoming clearer by the day—except, perhaps, for those with “minds closed” or those who are “stupid, brainless people who have eyes and do not see, who have ears and do not hear” (cf. Jeremiah 5, 21; Mark 8,18).

The pope’s plan for reform is rooted in one simple, yet very profound notion: God’s mercy. In fact, Francis dedicated an entire year to the theme, the recently concluded Holy Year of Mercy.

Now one could argue that, like most Holy Years of the past, it really was not that effective, at least in the original sense of the “jubilee” as spelled out in the Hebrew Scriptures.

The very first verses of Chapter 61 in the Book of the Prophet Isaiah describe it this way:

“The spirit of the Lord God is on me for the Lord has anointed me. He has sent me to bring good news to the afflicted, to soothe the broken-hearted, to proclaim liberty to captives, release to those in prison, to proclaim a year of favor from the Lord and a day of vengeance for our God.”

The Book of Leviticus (Chapter 25) is even more explicit in describing the Jubilee as the favorable time to forgive debts, rest the land, and make right all fractured relationships.

Some countries, including Communist Cuba, freed many jailed inmates, explicitly in the spirit of the Jubilee. Yet Pope Francis did not even pardon his only “prisoner”—Mgr. Lucio Vallejo Balda, a Spanish-born Roman Curia official who is currently serving an eighteen-month prison sentence inside the papal enclave for leaking confidential documents on the Vatican’s financial reforms.

And neither did the pope forgive other debts or punishments the church has imposed on certain of its members. For example, there are numerous priests who have been suspended from ministry and theologians who have had their necessary teaching mandates revoked or denied.

These were not restored during the Holy Year of Mercy.

And there are other Catholic individuals or categories of people who are officially separated from the church or held at arm’s length by ecclesiastical authorities. Despite the Jubilee, they remain so.

However, it can also be argued that the Holy Year was only the briefest, even if intense, prelude to a whole new season for the church to more lavishly offer mercy to wounded and frail humanity. In fact, that is exactly the case Pope Francis seems to be making in his latest document, the post-Jubilee apostolic letter called "Misericordia et misera."

“This is the time of mercy,”—writes the pope—“the path we are called to follow in the future.”

“Now is the time to unleash the creativity of mercy, to bring about new undertakings, the fruit of grace,” the pope exclaims in his new document.

This has alarmed a number of bishops, priests, and lay people who believe “mercy” is just Pope Francis’s secret codeword for relaxing church rules and discipline, especially those concerning human sexuality and other so-called “pelvic issues.”

What is absolutely astonishing though, is that those most zealous in sounding the alarm bells are unmarried men (both clerics and laymen) who, if they are as faithful as they insist, have never had sex. . . with a woman.

No need to name them. They have prominently and proudly identified themselves.

They know, probably better than most, that Pope Francis is serious about unleashing the creativity of mercy and bringing about any number of new undertakings. And the pope’s steely determination to do so is what frightens them most.

Those who are still not able or willing to understand the current pope should read the transcript of a free-flowing discussion he had in late October with fellow Jesuits who were participating in their order’s thirty-sixth General Congregation.

Here are just a few excerpts to whet your appetite for a very interesting read:

“It is evident that, in the field of morality, one must proceed with scientific rigor, and with love for the church and discernment. There are certain points of morality on which only in prayer can one have sufficient light to continue reflecting theologically. And on this, allow me to repeat it, one must do «theology on one’s knees». You cannot do theology without prayer. This is a key point and it must be done this way.”

Discernment vs. Rigidity in Moral Reasoning

“Discernment is the key element: the capacity for discernment. I note the absence of discernment in the formation of priests. We run the risk of getting used to «white or black,» to that which is legal. We are rather closed, in general, to discernment. One thing is clear: today, in a certain number of seminaries, a rigidity that is far from a discernment of situations has been introduced. And that is dangerous, because it can lead us to a conception of morality that has a casuistic sense.”

"Critiques also depend on who makes them. We should discern where they come from. I think that sometimes even the most malicious critic can say something that helps me. I think we have to listen to all the critiques and discern them, and not close the door to any criticism, because we risk getting used to closing doors. And that’s not good. After discernment one can say: this criticism has no foundation and I can set it aside. But we must submit to discernment all of the criticism that we hear, I would say daily, personally, but always with good will, with openness of heart and before the Lord.”

The Illness of Clericalism

“Clericalism, which is one of the most serious illnesses that the Church has, distances itself from poverty. Clericalism is rich. If it is not rich in money, it is rich in pride. But it is rich: there is in clericalism an attachment to possession. It does not allow itself to be nurtured by mother poverty; it does not allow itself to be guarded by the wall of poverty. Clericalism is one of the forms of wealth that we suffer from most seriously in the church today. At least in some places of the church.

“Clericalism does not allow growth, it does not allow the power of baptism to grow. The grace and evangelizing power of the missionary expression comes from the grace of baptism. And clericalism controls this grace badly and gives rise to dependencies, which sometimes have whole peoples in a state of very great immaturity. I remember the fights that took place when I was a student of theology or a young priest and the base ecclesial communities appeared. Why? Because the laypeople began to have strong leadership, and the first ones who felt insecure were some of the priests. I am generalizing too much, but I do this on purpose: if I caricature the problem it is because the problem of clericalism is very serious.”

“Joy of the Gospel”—The Most Important Document of the Pontificate

“I believe that Evangelii gaudium has to be deepened. It must be worked on by groups of the laity, of priests, in the seminaries, because it is the evangelizing breath that the church wants to have today. In this we have to move forward. It is not something finished, as if we were to say, «that’s over, now comes Laudato si’.» And then, «that’s over, too, now it is on to Amoris laetitia.» By no means! I recommend Evangelii gaudium to you as a framework. It is not original, in this I want to be very clear. It puts together Evangelii nuntiandi (Paul VI) and the Aparecida document (CELAM). Although it came after the Synod on Evangelization, Evangelii gaudium’s strength was to return to those two documents, to refresh them, and to offer them again in a new presentation. Evangelii gaudium is the apostolic framework of the church today.

If you are coming to Rome sometime over the next several weeks, either to celebrate various moments of the Advent/Christmas seasons or usher in the New Year, you’ll definitely want to plan to spend some time at the Vatican.

In addition to the usual attractions for tourists and pilgrims (such as St. Peter’s Basilica, the Sistine Chapel, and the Vatican Museums), there are also a number of special features and events focused specifically on the holidays.

Workers are already busy with preparations to install the huge Christmas Crib next to the obelisk in St. Peter’s Square. This year’s Nativity Scene is a gift from the people of Malta and will include some seventy larger-than-life human figures, plus even more animals.

A Norway spruce (picea abies) that stands eighty-two-feet-high (twenty-five meters) has already been hoisted in the square. Destined to be one the world’s most famous Christmas Trees, it comes from a forest in the autonomous province of Trento in Northern Italy. Eventually it will be festooned with some 18,000 low-energy LED lights and decorated with terracotta ornaments made from the designs drawn by Italian children with cancer.

The tree will be officially lit on December 9 and is to remain on display, along with Nativity Scene, until January 8, Feast of the Baptism of the Lord and end of the Christmas season.

There will also be plenty of opportunities for visitors to get a glimpse of Pope Francis over the next several weeks. In addition to the Angelus and papal blessing every Sunday at noon in St. Peter’s Square and the weekly general audience each Wednesday morning, the pope will preside at a number of holiday events and liturgies.

It all begins on December 8 when he leads a special Angelus for the Solemnity of the Immaculate Conception, the traditional start of Christmas preparations in the Eternal City. Later that afternoon Francis will join tens of thousands of Rome citizens and visitors near the famed Spanish Steps where he’ll make a floral tribute and lead prayers beneath a towering statue of Our Lady.

The first-ever Latin American pope will for the third consecutive year mark the December 12 Feast of Our Lady of Guadalupe with an evening Mass, primarily in Spanish, in St. Peter’s Basilica. By the way, the liturgy is only five days before Francis celebrates his eightieth birthday.

Naturally, there will be a regular schedule of Christmas liturgies from December 24-January 8, as well as the popular “Urbi et Orbi” blessing at noon on Christmas Day.

You can consult the Vatican calendar for further details and times of the papal liturgies.

While you are in Rome, you might also make a point of visiting the ancient Basilica of Santa Sabina on the Aventine Hill.

Not only will the adjacent Orange Garden offer you a magnificent view of St. Peter’s Basilica from far across the Tiber River, the church complex—international headquarters of the Dominicans—is also hosting a fascinating exhibition of contemporary works by Belgian artist Kris Martin.

The exhibit is called “Auguri” and is part of initiatives to celebrate the eight-hundredth anniversary of the founding of the Order of Preachers. The display—which begins in the Orange Garden and continues through the basilica and Dominican cloisters—was opened this past week and will run through January 24, 2017.

Check back next week for my review of this unique exhibit.