Leaving Afghanistan is the right thing to do.
By The Editors
Middle East
War and Peace
Foreign Affairs
Joe Biden 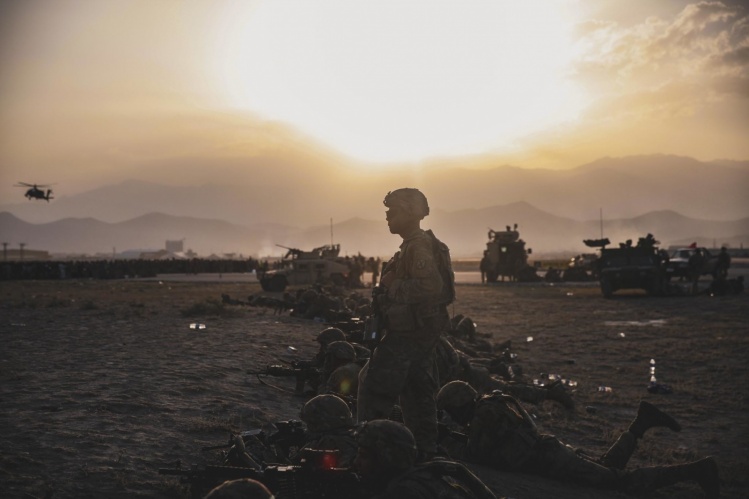 Twenty years ago this month, the United States suffered the worst attack in its history. On September 11, 2001, three thousand Americans perished, many more were wounded, and the way Americans saw the rest of the world changed overnight. Many of us were shocked that Al Qaeda, a relatively small group of religious extremists with little in the way of traditional military might, could cause such destruction in the centers of American power. In retaliation, the United States under President George W. Bush invaded Afghanistan in October 2001, with the goal of eradicating Al Qaeda and ensuring that such an attack could not be repeated.

Now that the United States has at last left Afghanistan, two decades and three presidents later, it’s hard to say just what we were doing there during most of that time. In the years after the initial invasion, the mission morphed and expanded: first it was about uprooting Al Qaeda and capturing or killing the mastermind behind 9/11, Osama bin Laden; then it was also about removing the ruling Taliban that had harbored the terrorists; and finally it was about establishing a liberal democracy in Afghanistan and training the Afghan military to fight like ours. Meanwhile, the war in Afghanistan became the longest foreign war in U.S. history. For Americans, it cost thousands of lives and more than $2 trillion. But the toll for Afghans was far worse: there the war meant not only occupation by a foreign power, but also constant political instability, corruption, drone strikes, civilian deaths, starvation, and displacement.

When President Joe Biden announced in April that U.S. forces would be withdrawn by September 11, it was clear this date was no coincidence. “War in Afghanistan was never meant to be a multigenerational undertaking,” he said. “We were attacked. We went to war with clear goals. We achieved those objectives. Bin Laden is dead and Al Qaeda is degraded.”

On July 8, Biden confidently reassured Americans that the prospect of “the Taliban overrunning everything and owning the whole country is highly unlikely.” But intelligence reports were by then warning that this was indeed a possibility. In the weeks that followed, the Taliban captured city after city until finally, on August 15, they conquered Kabul in a single day. President Ashraf Ghani resigned and fled the country. Many ordinary Afghans also tried to flee; countless others have been internally displaced. In some parts of the country, women and girls have already been forbidden to leave their homes without a male relative and are being kept from school. Those who aided or worked with Americans fear for their lives and the lives of their families, despite the Taliban’s promises of amnesty.

Our politicians whistled through the graveyard and let the war grind on.
sharetweet

Only a few months ago, Biden insisted that the Afghan security forces, which have received twenty years of training and $88.3 billion in aid and materiel from the United States, would be able to defend themselves against the Taliban. Biden’s tone changed once we saw how quickly Afghanistan would fall. “Afghan leaders have to come together,” Biden told reporters. “They’ve got to fight for themselves, fight for their nation.” The White House spokesperson Jen Psaki put it more bluntly: “They have what they need. What they need to determine is whether they have the political will to fight back.” In other words: this outcome isn’t America’s fault, because we did our best.

The day after the fall of Kabul, President Biden addressed the nation, defending his decision to pull out of Afghanistan, while acknowledging that the Taliban’s takeover “did unfold more quickly than we had anticipated.” His candor in this regard was welcome—a refreshing change from his predecessor’s reflexive bragging and deceit—but the overall tone of the address was oddly complacent. Biden put nearly all the blame for what had happened on Afghanistan’s government and security forces and almost none on our own country’s military and civilian leadership, which had systematically deceived the American public for years.

As the Washington Post’s 2019 report on the Afghanistan Papers showed, our military leaders knew for a long time that the war was unwinnable, that its objectives were too ill-defined, and that the United States wasn’t capable of installing a functioning liberal democracy at gunpoint. But our politicians whistled through the graveyard and let the war grind on.

If Biden was wrong to try to absolve us of guilt, he was right to pull the plug—thus rejecting the advice of the military establishment and much of the media. As the analyst Andrew Watkins told Foreign Affairs, “Many of the country’s drivers of conflict could never plausibly be resolved as long as American troops were present. Afghanistan’s war will not be over just because U.S. forces leave, but it was never going to end as long as they stayed.”

Of course, this is an unsatisfying conclusion for Americans. It should be. The damage is done; all we can do now is accept as many Afghan refugees as possible. We should feel sorrow and shame for the destruction we have caused, while recognizing that we can’t always fix what we’ve broken. We should also recognize that for many Afghans the difference between one regime and another may be less important than the difference between peace and perpetual war. Even Afghans who despise the Taliban may care less about who rules in Kabul than whether they can travel to work, plow a field, or attend a wedding without the constant fear of being shot at or bombed. “Give me liberty or give me death” is heroic, but “Give them liberty or give them death” is obscene.