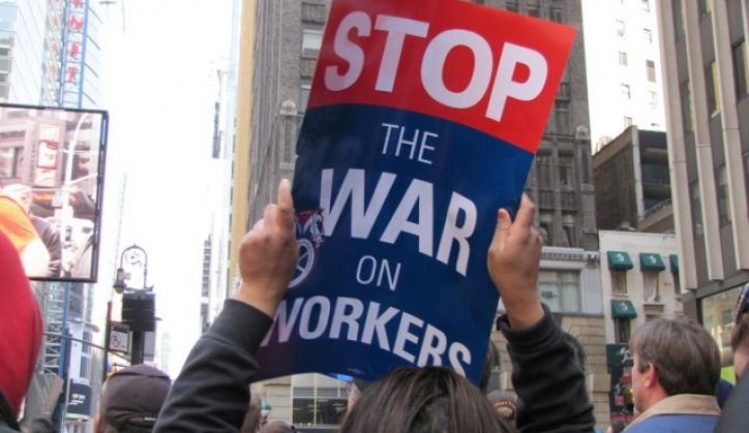 Labor unions can be corrupt, obstructionist, and maddeningly bureaucratic. They are also important mediating institutions—John Paul II called them “indispensable”—that serve as a counterweight and check on government as well as corporate power. In that role, unions are essential to the health of democracy, and crucial to promoting participation in the political process.

Just as important, over the past century the demands of unions for fair wages and benefits and safe workplaces were responsible for lifting hundreds of millions of Americans into the middle class. Indeed, the pressing issue of this presidential election year has been the “hollowing out” of the middle class. Few dispute the fact that the decline of the union movement has contributed greatly to the economic insecurity and powerlessness felt by so many Americans. Fifty years ago, nearly a third of workers were union members; today only one in ten is. For the past forty years, a well-financed right-wing effort has all but crippled private-sector unions. The result: Less than 7 percent of the private workforce is now unionized. Public-employee unions have remained relatively strong, thanks to the acceptance by government and unions alike of collective bargaining and binding arbitration. Today, 35 percent of public employees belong to a union, and the result has been decades of stable labor relations. But whether public-sector unions and their members will continue to thrive is now in doubt. Last month the Supreme Court heard oral arguments in Friedrichs v. California Teachers Association, a case celebrated on the right for its potential to fatally weaken public-employee unions.

In 1977, after years of strikes and labor turmoil, the Supreme Court ruled in the Abood v. Detroit Board of Education decision that it was constitutional to require public-school teachers who chose not to join a union to pay “agency” or “fair-share” fees. These dues cover the union’s costs for negotiating contracts for union members and nonmembers alike. The Court recognized that a balance needed to be struck between the free-speech rights of nonunion members and the so-called “free-rider” problem. Since nonunion teachers benefit from the union’s collective bargaining on their behalf, they have a legal obligation to help cover the costs: they are not allowed a “free ride.” The “burden” on the First Amendment rights of nonunion members was justified, the Court ruled, to avoid the damage done to unions by free riders and to advance the state’s interest in peaceful labor relations.

Public-sector unions are, of course, major financial contributors to the Democratic Party. In right-to-work states where nonunion members are not required to pay fair-share fees, as many as a third of public employees opt out of union membership, draining unions of cohesion and essential resources. The Friedrichs case has been steered through the lower courts by a right-wing libertarian group that is not coy about its hope that in overturning Abood the Court will deal a devastating blow not just to the union movement, but to the Democratic Party. The plaintiffs have come up with a novel argument as well. No distinctions can be made, they insist, between the union’s workplace and collective bargaining activities and its political advocacy. Everything about a teacher’s job—school budgets, salaries, class size, the curriculum—is inherently political. And if that is the case, the First Amendment rights of nonunion members are violated when they are compelled to pay “fair-share” fees.

It is difficult to imagine how any organization, let alone a union, could survive if it has no way to manage a free-rider problem. Should the Court rule in the plaintiffs’ favor, the likely outcome will be internal union strife and labor-management conflict. That likelihood explains why twenty-one states as well as the Obama administration joined the California Teachers Association in urging the Court to uphold Abood.

What is really at stake in the Friedrichs case is whether the right of workers to organize will be sacrificed to the current Court’s contentious views regarding the First Amendment’s free-speech protections. In Citizens United the Court’s five Republican-appointed justices ruled that restrictions on political spending by corporations were unconstitutional. Money, the Court said, is speech. If the justices’ remarks at oral argument are any indication, that is the same approach they are likely to take in Friedrichs—whatever the consequences for unions and municipal governments.

Free speech has not, and should not, trump every other right or social good. The right of association and the dignity that follows from having an effective voice in the workplace are equally important. When unions are starved of the resources they need to defend their members’ interests, workers end up with fewer rights, not more.