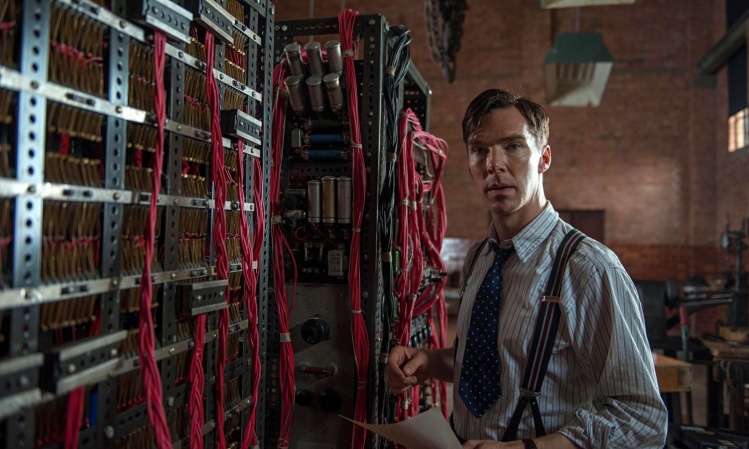 Dramatizing the full story of Louis Zamperini’s life—as recounted in Laura Hillenbrand’s bestselling book, Unbroken—would require a TV miniseries, not a two-hour feature film. Consider: A near-delinquent childhood in 1920s California redeemed by athletic achievement as a long-distance track star (competition in the 1936 Berlin Olympics won him no medals, but he did set an American speed record); then service as a bombardier in World War II, leading to a crash into the Pacific, where Zamperini survived sun, sharks, and starvation for forty-seven days aboard a raft; then rescue and capture by Japanese troops, who threw him into a prison-camp-from-hell, where he was singled out for special abuse by the man in charge, a sadist known as the Bird; then postwar PTSD, relieved by a happy marriage and a new embrace of Christianity, thanks to the young Billy Graham. Whew! In other words, enough material for several films.

And that was precisely the problem confronting Angelina Jolie and her scriptwriters: how to make a coherent movie, and not a patchwork, out of this cornucopia of adventure and misery. I don’t fault Jolie at all for wrapping up Zamperini’s postwar experiences with a short postscript and a clip of a happy Louie in old age. After all the athletics, combat, and torture, the movie would have had to reposition itself as a psychological drama of therapy and conversion, an entirely different kind of story.

But Jolie didn’t settle for mere tidiness. She and Jack O’Connell, the actor who plays Zamperini, have filled out Hillenbrand’s portrait of an energetic and plucky youth by making him an inveterate noticer, who gazes with wonderment at the things that a careless or hurried eye might miss. As a child at Mass, his gaze drifts from the plaster Christ over the altar to a pretty girl in the opposite aisle. Whipped by his father for his latest transgression, he ruefully looks down a staircase at his careworn mother lovingly preparing a meal: this sight may do more for him than the whipping. As a soldier he takes in the deceptive splendor of his bomb exploding on target like a flower whitely blooming, and we can intuit that his awe is mixed with horror. How malignly appropriate, then, for this constant observer to be forbidden by the cruel Bird to look his torturer in the eye.

Jolie uses the sheer horizonality of the screen well, and her compositions, beautifully burnished by the great cinematographer Roger Deakins, are always dramatic, never merely decorative. This helps make the first third of Unbroken a first-rate adventure story. But once the Bird unleashes his sick campaign to break Louie’s spirit, the movie must become more than an action film, and here it only partially succeeds. There are memorable scenes—for example, Louie’s temporary release from captivity to make a radio broadcast in a Tokyo, where the sights of civilization almost overwhelm the sense-starved youth. And the makeover of the book’s Bird (a mere stupid thug) into the movie’s sexually ambiguous sadist is well served by the performance of Miyavi, a Japanese rock star, whose slight hesitation before settling on the final word of each English sentence succinctly conveys a cruelty grounded in self-doubt. Yet the atrocious suffering is presented a little too tastefully, as if the director were muffling the cruelty to make the film more suitable for its Christmas release. And the pacing is too smoothly measured, considering that the emotions of all the prisoners (none of them memorable supporting characters) must have zigzagged in and out of the psychological states of terror, desolation, boredom, listlessness, exhaustion, and delirium. It’s not that Jolie prettifies anything—there is plenty of violence and squalor on display—but somehow we remain discomfited onlookers rather than partners in the characters’ pain.

The entire movie is too obviously geared to celebrate a Triumph of the Human Spirit. For example: the climactic scene in which Louie is ordered by the Bird, on pain of death, to hold a wooden beam across his shoulders for hours. This moment is drawn from a real incident, but when Zamperini triumphantly hoists his burden over his head and bellows his victory while the commandant sinks to his knees in despair—the villain broken, the hero unbroken—a note of directorial calculation spoils the impact. No doubt Jolie sees Zamperini as a paragon of sheer endurance, and so he was. But he was also a man capable of hating his tormentors and planning to take vengeance on them. When the movie’s Louie contemplates murdering the commandant, he is soon persuaded by a fellow captive that enduring is the real way to win. But, as Hillenbrand’s book informs us, Zamperini and some other prisoners actually went ahead with their plan to kill the Bird—not only out of hatred but as an act of sheer self-defense. And, by poisoning him with feces from the prisoners’ latrine, they came damn close to succeeding. (The Bird survived, but just barely.) To be sure, Zamperini later forgave all his captors and came to respect the Japanese people, but only after passing through the very human stages of resentment and vengefulness. As noted, Jolie couldn’t include every part of Zamperini’s story, for reasons of both length and narrative coherence, but did she keep his disgusting though understandable act of self-defense out of her movie in order to portray him as a saint of stoicism? I would have preferred the whole man, warts and all.

IF THE FACTS of Zamperini’s heroism were lost because of the post–World War II trend of burying bad memories, mathematician Alan Turing’s decisive role in cracking the Nazis’ Enigma code, an achievement that saved countless Allied troops, was temporarily obscured by the determination of military intelligence to keep the decryption operation hush-hush even after the war was won. Also, it didn’t help that Turing’s homosexuality didn’t fit the popular idea of heroism. Nor did his suicide in 1954, after a chemical castration he accepted as the alternative to imprisonment for “acts of gross indecency.” If Turing’s reputation managed to survive among fellow scientists, it was because his theoretical work on computing—the “Turing Universal Machine”—helped bring about our present digital age.

Cryptanalysis, spinning rotors, and statistical comparisons of letter repetitions may not be the stuff of exciting cinema, but for The Imitation Game (largely based on Andrew Hodges’s biography, Alan Turing: The Enigma), scriptwriter Graham Moore and director Morten Tyldum finesse the problem in two ways. First, Moore uses Turing’s arrest in 1951 as a framing device. A detective, trying to investigate the burglary of Turing’s apartment and irritated by his non-cooperation, comes to suspect that the break-in had something to do with Turing’s wartime activities, and that the mathematician may even be a “mole” feeding state secrets to the Soviets. Turing’s response is to tell the detective the whole story of the code-cracking, which is visualized for us as a flashback. I found this setup a bit hard to swallow: it’s hardly likely that Turing, pledged to secrecy about his role in the war, would have offered the detailed and intimate account we get in the film to an ordinary London cop.

Second, and more convincingly, director Tyldum and his excellent cast make the most of the personality conflicts, romantic detours, and mind-grinding work that took place in Bletchley Park, the code-crackers’ base of operations in Buckinghamshire. Turing, supremely eccentric, inevitably clashes with his less obsessive co-workers, but they come to appreciate and defer to his genius. Turing is played by Benedict Cumberbatch, who has made a specialty of such roles. If you’ve seen him on PBS as Sherlock Holmes, another socially isolated obsessive, you’ll know what to expect here, and the formula works niftily. There is something quintessentially British about this approach to the material: on the one hand, the half-mocking, half-admiring tolerance of eccentricity and, on the other, the stiff-upper-lip expectation that disparate personalities will get over their differences when duty calls, and pull together. This entails some clichés, as when the operation’s administrator, Commander Denniston, is portrayed as such a bigoted fogey that he unites all the Bletchley brains against him in support of Alan. Nevertheless, both the writing and the acting skillfully adduce the comic, heroic, and tragic aspects of Turing’s nature.

The comedy comes from the mathematician’s maddening ineptitude at picking up social cues. When a coworker tries to invite him out to eat by saying, “We’re going to lunch, Alan,” Turing can register this only as a statement of fact. But that same lack of emotional resonance leaves unfettered his heroic drive to see the job through, while his colleagues become distressed that every failure on their part means more casualties. Tragically, his obsessive concern with the Universal Machine after the war leads him to choose chemical castration over imprisonment, which would interrupt his work. He doesn’t understand that the bogus chemistry intended to suppress his sexuality will finally destroy his intellect, too. I learned from the Hodges biography that Turing was surprisingly bad at chess, that supremely strategic game. So was he utterly devoid of guile, cunning, and even self-preserving forethought? Was he the Prince Myshkin of mathematics?