The Life & Work of John Ashbery
By Frank B. Farrell
Poetry
Secularism and Modernity 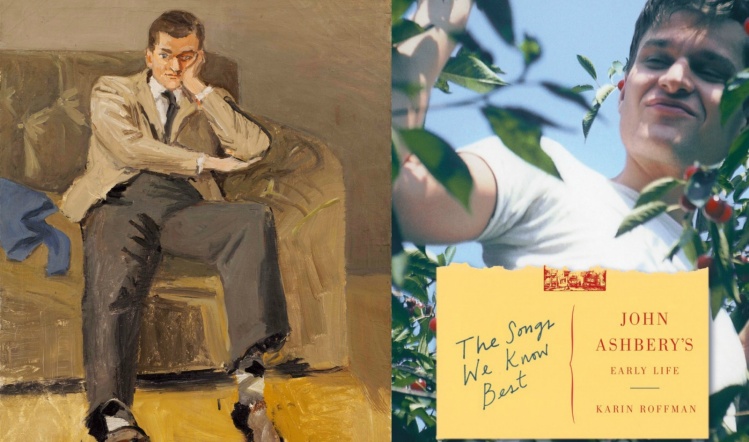 Portrait of John Ashbery by Fairfied Porter, 1952. Smithsonian National Gallery of Art and the cover of ‘The Songs We Know Best’

The poet John Ashbery died on September 3. The praise that followed his death, with several commentators calling him the greatest American poet of the past half-century, shows how much he is esteemed by critics and fellow poets. Shortly before Ashbery died, Karin Roffman published The Songs We Know Best, a biography of his early life. Any biography of Ashbery is bound to raise interesting questions about the relationship between life and art. If one reads the poetry of Ashbery’s almost exact contemporary James Merrill, one gets a rich sense of his life—of the places where he lived and traveled, of his friendships and love affairs, and of his emotional life. Most of Ashbery’s poems are much less obviously confessional and much more elusive. They provide few ordinary narrative guideposts and are full of odd shifts of register and tone. Ashbery said that while he wrote out of his experiences, he did not write about them. His poems begin, so he claimed, past the point where one reports on the kind of personal happenings common to all.

Roffman met Ashbery when both were teaching at Bard College. She has portrayed his early life up until the moment, in his late twenties, when he won a Fulbright fellowship to France and was selected by W. H. Auden for the Yale Younger Poets series. Ashbery provided her with two sources not previously available: a thousand pages of entries from the diary he kept from age thirteen to age sixteen and a box of poems, plays, and stories he wrote as an adolescent. She interviewed former friends and classmates, consulted the papers of his well-known associates, and read Ashbery letters already available elsewhere. Importantly, Ashbery offered her a series of long interviews over several years. All this access makes the biography read like a novel, with a novel’s immediacy, detail, and confident narration of past scenes, with the tone almost of an omniscient narrator. In perhaps 120 cases or so, a citation directs the reader to these Ashbery interviews. Of course, Roffman was interviewing a man in his late eighties who was recalling events from many decades earlier. Was he accurate and fair in recalling tensions with various classmates and possible lovers, most of whom had already died? That question is not raised here. In any case, the fan of Ashbery’s poetry is likely more interested in his version of events than in an objective account. Roffman has corroborated his stories when other witnesses were available. And getting such long personal interviews with Ashbery while he was alive provides a valuable emotional history.

John Ashbery’s early life was of a certain familiar type. He grew up in a small town in upstate New York. His father owned a farm and orchard, where John picked cherries and sold them by the roadside. John disliked sports, felt different and lonely, had a rich interior life, and designed fantasy games and theatricals with playmates. He wrote poetry and painted, was attracted to boys and felt guilty about it, and was determined to use his intellect and his artistic ability to escape to the city and make a name for himself. After winning a local competition, he was invited to participate in a national radio show called “Quiz Kids.” The tragedy of his early life is that his only sibling, a younger brother preferred by his father because of his easy charm and athletic skill, died of leukemia. Ashbery was mostly left on his own to train himself as a poet through the popular collections that he found at the public library, and as an adolescent he developed a special interest in the work of three female poets: Elinor Wylie, Edna St. Vincent Millay, and Marianne Moore. A rich woman with a summer home near his farm was impressed by him and recommended him to the headmaster of Deerfield Academy. At Deerfield he joined an art club made up of boys who saw themselves as outsiders, and was acclaimed for his performances in female roles in plays put on at the all-boys school—though he was also teased by some classmates for his gait amid rumors that he was homosexual. At Harvard he wrote for the Advocate and developed a liking for classical music (Alban Berg and Francis Poulenc were two of his favorite composers). His academic work was uneven, but he read widely. He studied seventeenth-century poets, Wallace Stevens, and Proust. His senior thesis was on Auden.

Some critics think of Ashbery as a con man whose poems take advantage of our insecurities about the avant-garde.
sharetweet

Roffman does not try to minimize the importance of Ashbery’s homosexuality. From a powerful unrequited love at Deerfield to frequent trips to gay bars while he was at Harvard, we see Ashbery trying to erase an early feeling that he might be the only one constructed in this way. A poem written at Harvard about a real-life love affair contains only the subtlest reference to an affair and no hint that it’s a gay one. In New York after college, he fell in love with a French Canadian. The relationship seemed to work until the two moved in together; two weeks later they broke up.

It is the New York scene of 1950–55 that will be familiar to readers of David Lehman’s The Last Avant-Garde. We see Ashbery hanging around with Frank O’Hara, Larry Rivers, Kenneth Koch, James Schuyler, Jane Freilicher, and other poets and painters, while taking low-level jobs in publishing and advertising. Roffman is good at portraying not only the group’s camaderie but also its tensions, quarrels, and gossip. The unity of the “New York School,” as it came to be called, was mostly a myth. Ashbery’s poetry became more experimental as he was influenced by the music of John Cage, by French poets such as Raymond Roussel, and by the tone of the English novelist Ronald Firbank. He attempted to unshackle words from ordinary language by playing with Roget’s Thesaurus.

Besides synthesizing her research into a lively, readable narrative, Roffman analyzes a number of poems written during this early period. Here some readers may have reservations. She interprets a poem with quite complex imagery as offering a straightforward message to his Harvard classmates “to travel widely and to explore without worrying about being correct.” In an earlier juvenile poem he says: “The trees / Tore our hearts back with them from the canoe. / And the boughs bled bright with our sacrifice.” Roffman sees the poem as anticipating a later lyric where trees viewed as joining arms suggest the promise of a satisfying human love. And she sees “the canoe / And the boughs” as together forming a safe shelter that love might restore. But the trees are hardly sheltering here, for as their branches brush against the pair on their way out of the cove, they tear at their hearts: the branches are bright with bloody sacrifice. Roffman too often makes the path from Ashbery’s life to his poetry more direct and obvious than it really was.

Some critics think of Ashbery as a con man whose poems take advantage of our insecurities about the avant-garde. It is true that his work leaves many readers confused and disoriented. And a poetry that is deliberately fragmented, sometimes obscure, and full of abrupt changes of register can invite scholars and critics to project their own meanings onto it. But Ashbery’s poetry does more than mystify. It manages to capture the penumbral, hard-to-name contexts that shape experience while remaining always at the edge of them. Some things are learned, he says in “The Wrong Kind of Insurance,” “the way light at the edge of a beach in autumn is learned.” We become more aware of how meaning takes shape when we see it almost coming into a clear form and then dissolving. Ashbery says he is interested in ephemeral shifts of consciousness rather than in any particular sustained experience. He poems often focus more on the act of experiencing than on the substance of experience, or more on the process of making a poem than on the poem as a finished artifact. Some readers hold that Ashbery’s poetry is more about the culture at large than about him. Reading his poems can be like turning from one station to another on an old radio; we rapidly tune in and out, picking up a phrase here, a fragment of melody there.

One is grateful for Roffman’s research and for the splendidly readable book she has produced from it. Not only does it tell us things about Ashbery’s life that his poetry declines to; it tells us things no other biographer could have. But it also leaves us with unanswered questions about the poetry itself—and above all, the question of whether the cost of Ashbery’s severe indirection is not sometimes too high. Ashbery offers important poetic experiences that traditional poetry has not typically offered. But in doing so he leaves out reference to a range of life experiences that many readers would like to see treated in poetry—and that this very biography shows to have been crucial to Ashbery’s own life.

Frank B. Farrell is a professor of philosophy emeritus at Purchase College, State University of New York. His most recent book is Why Does Literature Matter?