Trump Wins. Now What Do I Tell My Kids? 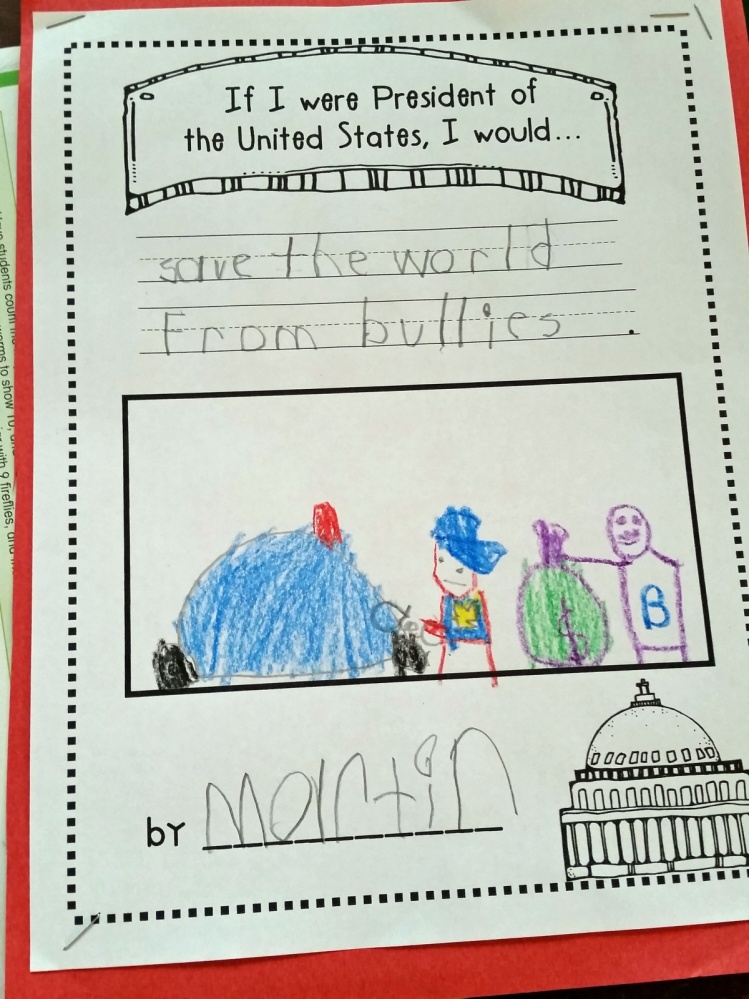 On election day, my son's kindergarten homework assignment had a presidential theme. He had to complete the sentence, "If I were president of the United States, I would...." I wrote down the answer he gave me, and he copied it onto the page in his neatest still-working-on-lowercase-letters handwriting: "I would save the world from bullies." I woke up this morning wondering how we'd tell him that the American electorate had decided to go in a different direction.

There was no clear anti-bullying candidate in the race, to be sure. But the Republicans chose a literal bully, a candidate whose entire campaign, whose entire approach to public life, has been a textbook example of bullying, and whose notion of leadership appears to be more of the same. And so many more people decided to line up with him than I ever imagined would do so. It's a truly chilling picture.

Until recently I allowed myself to believe that I wouldn't have to explain Donald Trump to my kids yet. My worries were for the future—watching the GOP convention, I wondered: when my boys are old enough to learn about what happened in 2016, to learn that a man so manifestly unfit for the office of the presidency and so plainly ignorant and cruel had nevertheless become the nominee of a major party, what will I be able to say that might explain such an awful turn of events? I thought Trump would be history by then. A cautionary tale. In the meantime, I was glad they were too young to be following politics, and I did my best to keep the whole ugly mess out of their lives.

A couple days ago, my five-year-old came home from kindergarten saying, "Can we vote for Donald Trump? I want him to win!" It was hard not to react with the horror I felt at hearing those words in his little voice. I knew that he must have picked it up on the playground, like the other rude expressions he's been trying out since he started school this fall. Some other kid said it and seemed pleased with its edginess, so my son decided he'd say it, too. I told him I disagreed and left it at that, and hoped—really believed—we'd be able to leave it at that for a long time to come.

And then this morning came, and with it the possibility that my kid would go off to school crowing blithely about how he was glad that Donald Trump won. And I know he doesn't know what he's saying. But I also know how that could sound to the kids in his class for whom Trump's message is one of overt hatred and fear. So we had to try to explain to my son why it could be hurtful to others for him to be gloating about Trump's victory—my son who is still too young to know that racism is a thing, that the color of his classmates' skin or their families' religion might be something that merits attention, let alone suspicion. That goes for sexism too. I hope and pray that Trump's history of sexual harassment and objectification of women is not commonly known in kindergarten. But the fact that Hillary, if elected, would have been the country's first woman president is something that the girls, at least, were likely aware of. What will it feel like for a little girl who was rooting for Hillary to make history to know she lost and then be teased about it by triumphant, ignorant little boys like mine?

My kids have no idea what's at stake, and they shouldn't, but over the next four years they're going to find out. I don't know how to tell them that the country elected a man who pledged to round up Muslims and shut out refugees and redouble American commitment to torture as a tactic of war. That the country voted for a man whose campaign was an endless stream of shameless lies and fear-mongering. That we have put in power, across all three branches of government, a party that openly embraced the suppression of minority votes; that is committed to rolling back whatever successes we have found in combating the effects of climate change, and to resisting further progress; that pledges to repeal the Affordable Care Act and replace it with...nothing.

And if you are among those who advocated for Trump on "prolife" grounds, perhaps you can explain to all of us why you helped elect a man and a party that promised to take away my family's health insurance, and why I'm now wondering how we'll pay for the care of the baby I'm due to deliver in April.

This isn't the world I wanted for my kids, or for their vulnerable peers, or for any of us. And I will never understand how anyone could have felt differently—how anyone older than five could have looked at Donald Trump and said, "That's the guy I want to win."