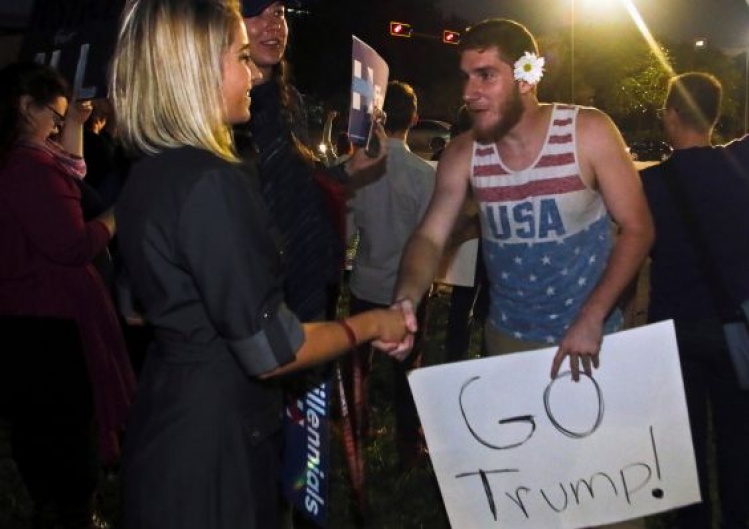 What kind of a nation chooses as its national leader a verbally abusive, politically inexperienced, temperamentally volatile, maddeningly narcissistic, scapegoating demagogue? A man whose personal conduct has been indecent, whose business dealings are dubious, who prides himself on avoiding taxes, and who is brazenly contemptuous about truth or even consistency in his pronouncements?

What kind of nation? Well, a nation with an Electoral College, for one thing. And for another, a nation whose voters endorsed Trump’s opponent by a margin of several million ballots.

It doesn’t matter. Donald J. Trump will be president. So we are not supposed to say those things about him. But even if a strategically located 55,000 votes had gone the other way and President-elect Clinton were now quietly assembling her governing team in an atmosphere of professionalism and competence—in other words, even if Donald Trump had merely come close, that would be sufficient to raise profound questions about who we are and how this happened.

All of the above. Defeat by a thousand cuts. But, please, each in its measure.

The election has already produced thoughtful analyses, as well as facile, finger-pointing ones. None have survived without qualification as the voting results have been sliced and diced and working-class women, non-voters, and Trump supporters who had previously voted for Obama have been interviewed.

Most of the crucial factors are neither new nor newly recognized. Economic inequality and stagnation, the loss of jobs to automation and cheaper labor overseas, the toll of family breakdown, opioids, alcohol, and suicide on rural and small-town communities trapped in decline, none of this has escaped major attention. We were worrying about the Rust Belt when an economically all-powerful Japan (remember that?) was the villain. I cannot recall a time when the plight of Appalachian coal miners wasn’t a subject in presidential contests.

Why haven’t all these problems been addressed? Actually, Obama is handing over to his successor an economy in better shape than any since, well, since the one Bill Clinton handed over to George W. Bush. Nonetheless, the problems remain. In the case of some, no one has a convincing, cost-effective solution that doesn’t appear to reduce employment and raise the cost of living elsewhere, or degrade the environment. In many cases, compensatory and safety-net proposals have been consistently blocked by conservatives and special interests.

Which bring us to the Republican Party. The United States has a two-party system. Disappointment with the governing party inevitably leads voters to turn to the other. Their vote is less a Yes for the Outs than a simple No to the Ins. In 2008, Obama benefited from voters not necessarily thrilled about an African-American with a suspiciously strange name. In 2016, some of these same voters were not thrilled about Trump but nonetheless made him their way of voting “No.”

What happens, however, if one party goes completely off the rails? The Democrats have major shortcomings and Republicans can cherry-pick some outlandish instances. But despite Republican claims, I don’t think one can find anything like opinion polls showing that Obama is a Muslim, poor people have it easy, and global warming is a hoax created by fortune-hunting climate scientists. The record of sheer GOP obstructionism rebuts the notion of a symmetry between the parties. For decades, Republican shakers and movers have stoked the fires of America’s deep-dyed suspicion of government, summed up in the Tea Party placard, “Keep the government out of my Medicare!” They let resentments and demonizing fester when they didn’t actively promote them. Suddenly the party discovered it had a pack of presidential candidates to the right of Ronald Reagan and at their head Trump denouncing immigrants, international trade, and anyone who disagreed with him.

In the face of this unpleasantness, Republican leadership, with a few honorable exceptions, proved utterly craven. For all the justifiable talk of the aggrieved white working-class voters without college degrees, Trump wouldn’t have won without the dependable votes of comfortable, well-educated, middle-class Republicans. Many had been drinking the party’s anti-Obama, anti-Clinton, anti-Washington Tea-and-Kool Aid for years. Others were simply exercising the permission slips that Republican leaders like Paul Ryan, Mitch McConnell, and Michael Pence had issued. I understand party loyalty. But if you don’t draw the line at Trump, where exactly do you draw it?

That is my gnawing question about Trump voters, especially the dispossessed white working-class ones. Did they vote for Trump because he was Trump—this weird amalgam of P. T. Barnum and Friedrich Nietzsche—or despite it? Obviously the question is one of extent and degree, and also a question of culture more than economics. The bleak economic prospects leading so many to turn to Trump are undeniable. Yet in imagining him as their champion aren’t they reflecting the very “disposable” culture of glitz, celebrity, and churning consumerism that has betrayed them economically?

And that raises the much-bruited issue of identity politics. Clearly, the Democrats’ fixation on sheer diversity, a demographic checklist of age groups, income groups, and racial, ethnic, and sexual minorities, has proved a failure. But what is the problem—simply the emphasis on identities or the failure to connect with some identities (e.g., traditionalist, rural, working-class) in a convincing way? Perhaps the problem, to a disturbing degree, is the loss of identities, of identities, that is, with any genuine life-shaping character, any authentic culture, rather than identities based on skin color or admiration for a reality TV star and winner at casino economics?

I would have thought that religion might provide that kind of identity, until I looked at the 81 percent white evangelical vote for Trump and the 60 percent white Catholic vote. My guess is that these churches and, by association, religion generally, will find themselves badly discredited by a Trump administration bearing gifts. The prolife and religious freedom movements, which I consider of major importance, may win a round or two in the Supreme Court. Unfortunately, with the mark of Trump stamped on their foreheads, they have virtually doomed themselves in the cultural contests essential to their goals.

I have not said anything about “whitelash.” I never believed for an instant, as I am sure Barack Obama never believed, that we had entered a “post-racial” era. I also don’t believe that we are returning to Jim Crow or that black bodies exist in constant danger of being mowed down by white authorities on the streets. But I have neither space nor ability to address with due gravity and precision what 2016 reveals about where the nation stands in regard to this, its deepest and most threatening wound. My only observation, practical but superficial, is that you don’t win over people by calling them racists.

What kind of a nation are we on the eve of a Trump presidency? A nation, as I said above, where given the choice between Donald Trump and Hillary Clinton, more Americans chose Clinton. What kind of a nation will we be four years from now? As always, that depends on unforeseeable international events.

Otherwise, I would say, it’s the economy, stupid, but it’s not just the economy. It’s the culture. It’s dignity. It’s security. It’s respect.