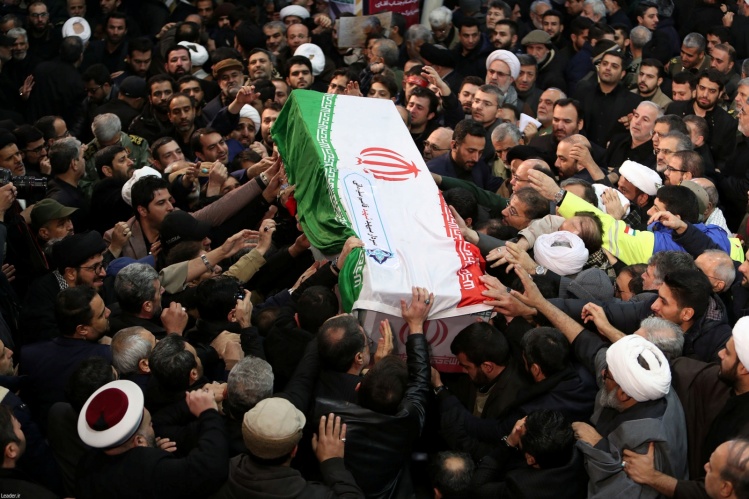 “He was saying bad things about our country, like we’re going to attack, we’re going to kill your people. I said, ‘Listen, how much of this shit do we have to listen to, right?’” That is the latest explanation for why President Donald Trump ordered the assassination of Iranian Gen. Qasem Soleimani earlier this month. He said this not to Congress, nor to the American people, but to donors at his Mar-a-Lago resort during a dramatic rendition of how the airstrikes unfolded, according to a recording of the comments obtained by the Washington Post.

That makes as much sense as any of the other rationales for killing Soleimani that have been offered so far. At first Trump said he did so because Soleimani was about to launch an “imminent” attack on Americans. But no concrete, specific evidence has yet been offered to support that assertion. Secretary of State Mike Pompeo admitted as much. “We don’t know precisely when and we don’t know precisely where,” he said on Fox News, “but it was real.” When Chairman of the Joint Chiefs of Staff Gen. Mark Milley briefed Congress on the strikes, he provided three dates on which they were concerned attacks would take place, but a lawmaker at the briefing told the New York Times that they were all “before the strike on General Soleimani and no attacks actually occurred then.” Sen. Mike Lee, a Republican from Utah, called it “probably the worst briefing” he’d experienced in his nine years in office. “We never got to the details,” he said.

No matter. Trump started filling in the details himself, saying that he assassinated Soleimani because of a plot to attack an embassy. That quickly became a plot to “blow up” the U.S. embassy in Baghdad. But that didn’t last very long, either, because he soon went on Fox News to further embellish the story. “I can reveal that I believe it would have been four embassies” Soleimani was going to hit, he said. Eventually, basically conceding that he was making it up as he went along, Trump confessed that “it doesn’t really matter” what the reason was.

Trump promised to avoid more wars in the Middle East, but his desperate need to be seen as tough makes that seem increasingly unlikely.
sharetweet

He’s right. The presidency has now accrued vast, mostly unaccountable powers to carry out assassinations abroad. Since President Gerald Ford issued an order banning “political assassinations,” but leaving the meaning of that term hazy, his successors have steadily turned the prohibition into little more than words on paper. As recently explained in the New York Times, the Reagan administration argued that only “unlawful” killings counted as assassinations—a definition that has stuck. The problem is that “executive branch lawyers typically determine when the government has the power to kill someone abroad,” a kind of circular reasoning that makes the use of executive power answerable mostly to those wielding it.

This is the killing machine Trump inherited and is recklessly deploying, having brought the United States and Iran to the precipice of outright war just as he was facing a Senate trial after being impeached by the House of Representatives. In this case, cooler heads have prevailed: for now. Trump threatened to destroy fifty-two sites in Iran—including cultural sites—if the Iranian government retaliated against the assassination. But when Iran hit a U.S. base in Iraq with missiles, killing no Americans, the immediate situation seemed to stabilize. Trump accepted that as a proportional response, and the possibility of escalation was momentarily defused.

But we still have an unstable, impulsive president who has claimed the right to kill foreign leaders he deems “bad” enough—a standard that, depending on Trump’s mood, could apply to any number of adversaries. And we still face a volatile relationship with Iran, one that, since Trump pulled out of the 2015 Iran deal, careens from crisis to crisis. It also should be underscored that at the same moment an American strike killed Soleimani, the United States also tried—and failed—to kill Abdul Reza Shahlai, a key commander of Iran’s elite Quds Force in Yemen. The Washington Post reported that the unsuccessful operation suggests that the Soleimani assassination “was part of a broader operation than previously explained, raising questions about whether the mission was designed to cripple the leadership of the Islamic Revolutionary Guard Corps or solely to prevent an imminent attack on Americans as originally stated.”

Just what is Trump trying to do with Iran—and are there any limits to how he might try to achieve his aims? Congress needs to find out and rein in the president. Sen. Tim Kaine’s and Rep. Elisa Slotkin’s War Powers resolution, which has already passed in the House and attracted enough Republican support to succeed in the Senate, is a good first step, putting pressure on the rest of congressional Republicans to check the president. But it’s not veto-proof. The “No War Against Iran Act,” introduced by Sen. Bernie Sanders, which would block funding for any unauthorized use of military force against Iran, would be even more effective. As a candidate, Trump promised to avoid more wars in the Middle East, but his desperate need to be seen as tough makes that seem increasingly unlikely. In this, as in so many other aspects of his political persona, he remains a fraud.