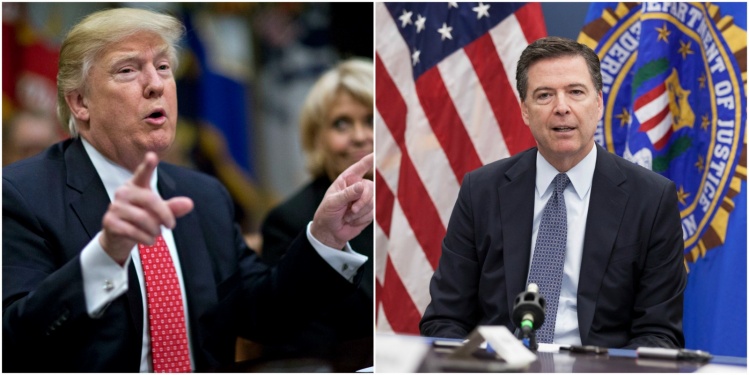 Senate Majority Leader Mitch McConnell is one of the shrewdest politicians of his generation. But by speaking Wednesday on the Senate floor in defense of President Trump’s firing of FBI Director James Comey, McConnell made what is likely to stand as the most important mistake of his long political career.

McConnell, who is measured and calculating about everything, should have known better. He chose to ally himself with a man who becomes unhinged whenever the subject of his campaign's possible collusion with Russian interference in our election arises.

Removing the leader of the nation's top law enforcement agency while he was in the middle of an investigation that could touch the president should—no matter what your view is—call forth seriousness, sobriety and thoughtfulness. When critics can legitimately wonder if it is part of an effort to obstruct justice, a president would do well to treat the matter in a reflective way.

But as an empty, unserious man who thinks only of himself and knows only how to deride opponents, Trump began a series of Wednesday tweets at 7:10 a.m. with a puerile assault on Democrats who now “play so sad” over Comey's firing.

A little over an hour later, Trump mocked Sen. Richard Blumenthal, D-Conn., calling him “Richie,” for misleading statements Blumenthal had made in 2008 about serving in Vietnam. Blumenthal apologized long ago. As Trump characterized it, Blumenthal was “caught” and "cried like a baby.”

Is McConnell really sure he wants to stand with a man who will spew out attacks on anyone and everyone who gets in his way?

By contrast, many of McConnell’s Republican colleagues have begun disentangling their party from a presidency that is likely to end in a train wreck. Arizona Sen. Jeff Flake said he spent “several hours trying to find an acceptable rationale for the timing of Comey's firing. I just can't do it.” Senate Intelligence Committee Chairman Richard Burr of North Carolina said he was “troubled by the timing and reasoning of Director Comey's termination.” Sen. Ben Sasse of Nebraska joined in calling the timing “very troubling.”

Someday, McConnell will wish that he sounded more like Flake, Burr, Sasse and similarly minded Republicans. All of them are aware of how absurd it is for Trump to pretend that a concern over Comey's behavior in the Hillary Clinton investigation—the very behavior the president once praised as demonstrating Comey's “guts”—is the actual reason for the firing.

Is McConnell really sure he wants to stand with a man who will spew out attacks on anyone and everyone who gets in his way?
sharetweet

McConnell repeated White House talking points justifying Comey's firing by noting that Democrats had eviscerated Comey’s handling of the Clinton matter. What this misses is that many who thought Comey was wrong in the Clinton case were also strongly opposed to his being fired. Since readers have every right to question whether columnists are being consistent, this is what I said on a radio show in January:

“However angry liberals and Democrats might be at Comey for what he did, I think the worst outcome might be for Donald Trump to name a director of the FBI and that, at least in Comey's case—and I'm very critical of him on what he did here—we know he has a history of independence. And I would really not be comfortable with Donald Trump having even more influence on the FBI.”

In light of all that has happened in the intervening four months, the idea of Trump naming a new head of the FBI is even more disquieting. And it is beyond belief that anyone in the White House could think that the memo criticizing Comey on the Clinton probe from Rod J. Rosenstein, the deputy attorney general, would be persuasive to Trump’s foes.

Most disturbing are signals that Trump's interest is in shutting the Russia investigation down altogether.

It has now emerged that days before he was fired, Comey had asked Rosenstein for more resources to investigate Russia's role in the election. That seems a more credible reason for why Comey was fired than Trump's solicitude for the woman he called “Crooked Hillary.” White House spokeswoman Sarah Huckabee Sanders said on Fox News after the firing that the “bigger point" on the Trump/Russia inquiry was “when are they going to let that go” since “there's nothing there.” Yes, getting us to let go of any hope that Trump will be held accountable is the real agenda.

Maybe McConnell figures he can reposition himself on Trump at the right time. But he missed his chance to stand up when it mattered.

The Heart of Francis's Mission