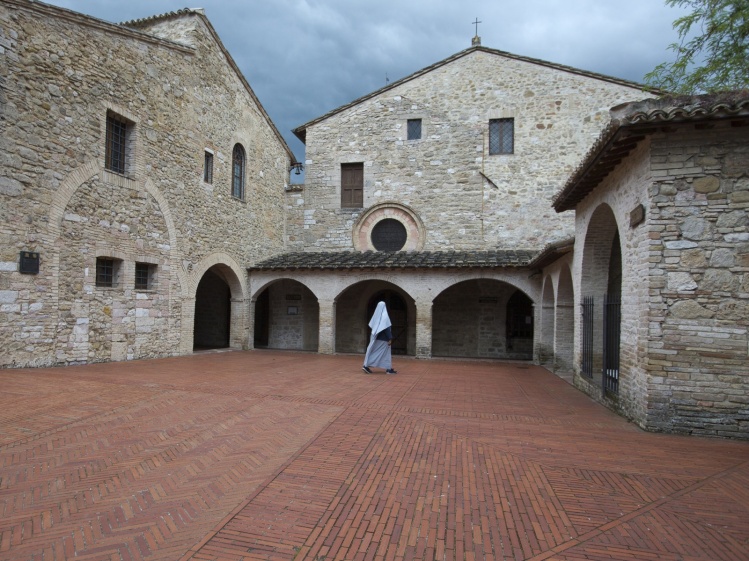 When my oldest daughter was a baby, she carried with her, from car seat to crib, My Little Golden Book About GOD. A gift from her great-grandmother, it was full of cherubic children cradling birds, nursing wounds, and gazing, dumbfounded and sweet, at a vast and star-strewn sky. Now at eight, it’s her quest to perfect “Adeste Fideles” on her guitar that obsesses her, and touches something in me, though my own belief in God is mercurial, and until she requested otherwise, I was more compelled to take my kids to play outside than to Mass.

Early on, my husband and I found vague common ground in seeing a relationship with nature as the closest thing to a true religious experience, though I never disliked church. While his Evangelical background and late-adolescent turn from its dogma left in its wake a gaping space and a lack of interest in organized faith, my own Catholic upbringing had felt like wandering a vast and fascinating museum and left me relatively unencumbered. As I passed into adulthood, I carried with me, more than a set of specific beliefs, a subtle passion and a sense of mysticism, a box with relics—an idea that things could not be easily explained.

We were married in the church of my childhood, complete with the formality of pre-Cana, but I never asked my husband to convert, or wanted such a gesture of conformity. When I went to Mass with my first daughter, she conducted the choir from her seat. But sitting next to her, getting serotonin hits from the curve of her angelic cheeks, I was more aware than ever that it was my human habitat that illuminated everything. Soon I had two more children, and each grew old enough to ask, “Is this story about God a true story?”

I’d sensed their souls from the moments of their births, but couldn’t offer them certainty about the divine. What I could offer was my willingness to say “I don’t know” to questions, and my hope that they would learn to accept mystery in a world ravenous for the definitive.

When I was in my early twenties, I traveled to Italy, to the town of Assisi. I wasn’t looking for religion per se, but I was disengaged from the adult world I had only just entered. Visiting the Basilica of St. Francis, I heard a guide speak about a fatal quake that hurled the vaulted inner roof of the basilica down on those below.

Death was not merely an abstraction for me; I already had some experience with it. My first boyfriend had died earlier that year. His death had been sudden and unexplained, its details enclosed in the privacy of his parents’ grief. The circumstances tormented me—we had just broken up, promising each other a friendship that never had the chance to form. But his parents were kind to me. I was not their child, but I was lost too, and they would feed me lunch, take me to the beach. In the months we spent together, his mother saw him in everything—a pair of white butterflies in her garden, the words of a psychic, a dream. But my odd brand of soulful agnosticism evaporated into a feeling of absolute certainty that he simply wasn’t anywhere. My post-college life began to falter. My new relationships were jagged things; I felt unmoored amid strange office creatures, accompanied by a ghost I couldn’t even believe in.

In the basilica, as the guide played a grainy video of the vaults collapsing with a roar, I remembered an exchange my boyfriend and I had about the distant quake. “That’s how I’d want to die,” he’d told me. “Under a giant fresco.” He was exquisitely intelligent, but also recklessly passionate in a way that always made him seem to be teetering at the edge of death, without its reality being even remotely imaginable. It had been one of our last conversations.

I left the basilica shaken, and wandered out into the town, which was beautiful but alien with its narrow streets, hidden enclosures, and storybook stone buildings. Assisi is a medieval hill town, rising above the valley of Umbria, its streets winding, its perimeter walled. I spoke no Italian, and, in my distracted state, I quickly became disoriented. In the middle of this confusion, which felt more dangerous than it probably was, I turned into a courtyard where nuns in all white were filling glasses of water.

I was struck dumb upon seeing them. The moment presented itself with a cinematic clarity: the serenity of their voices, the quiet that surrounded them, their smiles, sun on a pitcher of water. I stood there dazed, saying nothing, until one beckoned—a word that never felt quite so apt—and handed me a glass, which I drank. I stayed for what seemed a long time. When I emerged, something had changed. For many months afterward, thinking about those nuns offered a strange solace, though I knew my emotional response could be easily explained. The history surrounding us was palpable, the light on the water lovely; a person reached out to me with human simplicity at a time when I needed it most. Yet some kind of alchemy took place. It was a small shift, not from one certainty to another. But there it was, flickering in and out of visibility, the possibility that I had been mistaken.

The alchemy didn’t last. As a parent, years later, I was confronted first with practical concerns. Religion could be divisive, I feared, within ourselves and with those around us. It was easy, in the context of regular life, to justify what we stood to gain through avoidance. But what capacities, I came to wonder, were simultaneously being crippled? What possibility of reprieve in an unknown future was I denying my own children, whom I loved with a protective ferocity? When my little boy piped, “Ghosts aren’t weal” on a walk through an old cemetery, my disappointment with his certainty surprised me. When my kids started offering up prayers when an ambulance wailed by, I was comforted by their instinctive sense that living things are connected in invisible ways. I wanted them to have that. I wanted them to experience a relationship with things eternal and mysterious.

Yet it grew difficult, with my complicated and shifting appreciation, to figure out what, exactly, my children’s religious education should look like. Instinctively I felt their inquiry should be made from the inside out, not as outsiders peering in, drawing caricatures of what they saw. For a few years, I tried Catholic school, before settling into a comfortable, open-ended approach, telling my children that organized faith provided a place for contemplation of the divine, not an infallible moral or metaphysical system.

But what does this smorgasbord—a nondenominational performance of Messiah here, a lit candle in an empty church there—really leave them with? I find it strange, at times, to offer what amounts to religion-lite, when what attracts me is the potential for depth. Is it possible to engage in a way that goes beyond mere aesthetics, yet avoid dogma? Is all inquiry doomed to end at a lifeless impasse between true and untrue? In spring, girls in white veils spilled out of a church, and my daughter’s eyes grew wide. “When will I make Communion?” she wanted to know, because she was seven too. She grew irritable when I told her she had more to learn, that it was important to be sure. Certainty was for the faint of heart; she still wanted to wear the white dress.

After the shock of the quake in Assisi I know there was another sound, softer but more ominous, as the pieces fell and fell inside that empty church. It could have lasted no more than minutes, but in my mind’s eye it happened slowly, the way beauty or faith undoes itself. Sixteen years ago in late summer, I sat in a mother’s garden, watching for white butterflies. “They always come,” she’d told me, before I never came again. That garden is just ten miles from where I now live, and in the years since, I’ve driven hundreds of times down that stretch of highway, past that parallel world. I drove with my three children, their own lives invisibly unfurling.

My agnosticism is more than a way to hedge all bets. Each prong of it runs equally deep. My struggle for a balance of exposure and reason, for a sense of where faith ends and desire begins, is ongoing, a mystery of change in itself. When my kids practice the discipline of sitting quietly at Mass, absorbing the traditions, if not the catechism of their grandparents, I feel the weight of responsibility for nurturing their spiritual paths. Yet I also know that what they experience isn’t for me to decide. Just as some are born with a talent for mathematics or music, I believe that some are born with spiritual receptivity. My cousin became a nun, a renunciate; my closest friend experienced recurrent dreams even before kindergarten about being shown the universe, and an understanding of a greater plan was placed in her heart. That there exist people of such devotion is a source of comfort. Envy too. Not everything is an intellectual choice.

I may never believe in a God I can explain, beyond sensing the divine in a flash in the eyes of someone I love. When my daughter confronts her own tangle of history and myth, truth and strangeness, she will sense, I hope, what to enclose in her heart and what to throw away. I think of myself not much older than she is now, how I wanted freedom from things that weighed me down with their falseness, without losing the mysteries that elevated me. And how hard it was—and still is—to know the difference.

Funding for this article has been provided by a grant from the Henry Luce Foundation.