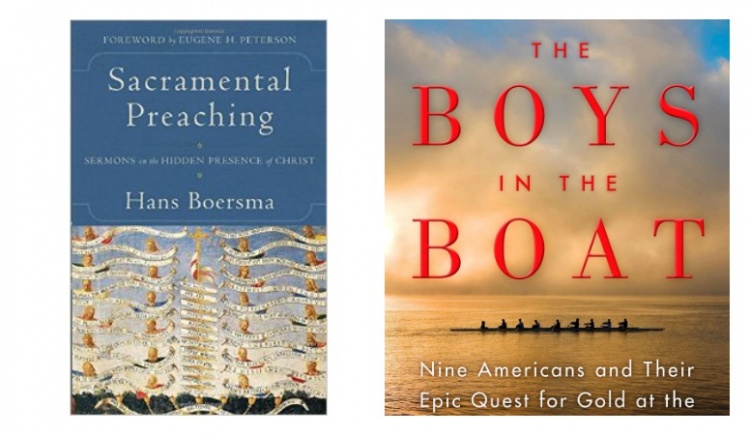 John Lennon’s “Imagine” has to be the worst of all holiday songs. The cloying ode to a religionless utopia is nihilism passing as hopefulness and vision: “Imagine there’s no heaven / It’s easy if you try / No hell below us / Above us only sky / Imagine all the people / Living for today.” The belief that religion is the enemy of human flourishing is appealing and potent. Nietzsche held that Christianity would be overcome not by logic, but only if people were convinced it was a “capital crime” against life. Happy Fred’s nineteenth-century contemporary, John Henry Newman, came to the same conclusion from the other direction: “It is not reason that is against us, but imagination,” he wrote, for he knew that unbelief stemmed most often from deeper blockages in the heart. As one man said when asked why he didn’t believe in Christ, “My hands are too small.”

Christmas is, of course, an imaginative abbondanza, filled with sketchy shepherds, filthy stables, stinky donkeys, a virgin mother, a heavenly father, and an infant utterly human and fully divine. A preacher who can’t make a go of that should just hang it up.

Hans Boersma’s Sacramental Preaching: Sermons on the Hidden Presence of Christ (Baker Academic, $23.99, 240 pp.) is a collection of fourteen sermons, each accompanied by explanatory “preacher’s notes.” That description may sound like a Christmas curse to some, but Boersma, a Reformed theologian and minister teaching at Regent College in Vancouver, is fluid, inviting, and unpretentious. His book is a masterpiece of “praying theology.” Against exegetes who imprison the Bible in the historical past and postmodern types suspicious of oppressive “metanarratives,” he invites us to consider Scripture as a living word in the present day that speaks of one subject from Genesis to Revelation: Jesus Christ. Boersma calls for a renewal of the “sacramental reading” practiced by the early church: spiritual realities are contained in historical events; the New Testament is already present in the Old Testament. Moving from sacrament to reality, we come to share in God’s happiness.

Boersma’s sermon on Jesus’ dispute with the Sadducees over the resurrection is all about imagination. The Sadducees hold that Moses said nothing about resurrection of the dead; it’s an “open-and-shut case.” Jesus, by contrast, reveals their “hampered imagination,” their superficial constriction of God’s power and fidelity. Opening up the scripture, Jesus shows that resurrection is precisely what God is about: his faithfulness refuses to accept death and brings unending life. The “God of Abraham, Isaac, and Jacob” revealed to Moses at the burning bush is precisely the God who raises the dead. “God’s faithfulness,” Boersma writes, “will shatter your wildest of dreams.”

Much preaching seeks to fit the scriptures into our lives, which gets it backwards. Boersma invites us to do the opposite: to place ourselves into the scriptural world and to make sense of our lives within its story. Preaching must expand the imagination so that it can enter into that scriptural world and find there the “real” world that we often suppose to be elsewhere: “When we see God’s glory in Christ, we also become God’s glory in Christ.”

Daniel James Brown’s The Boys in the Boat: Nine Americans and Their Epic Quest for Gold at the 1936 Berlin Olympics (Penguin, $17, 404 pp.) is a best-selling melodrama about a Depression-era University of Washington rowing team that happens to be true: a homeless boy abandoned by a resentful stepmother and a loving but weak father becomes the final piece in a championship crew; a rough-hewn Western team triumphs over condescending Eastern crews to win an Olympic berth; Hitler and Mussolini square off against the United States, including Washington’s Jewish coxswain; rigged lane assignments in the Olympic final are overcome in victory.

I rowed in college and admire Brown’s grasp of competitive rowing: the exhaustion of training and racing, the tension of competing against other teams and one’s own teammates (and oneself), the awesomeness of “swing”: that moment when all eight rowers are in sync, pulling with maximum effort and unimaginable effortlessness, every prior moment of pain and frustration giving way—only after sacrifice and yet only as gift—to grace and lightness.

Joe Rantz is the story’s hero; taught by his father that every problem has a solution—often an unlikely one—he survives repeated abandonment and makes his way to college, supporting himself with jobs both menial and dangerous (e.g., wearing a safety harness while jackhammering sheer cliffs during the building of the Grand Coulee Dam). Rowing, however, teaches him that self-reliance—which has been his deliverance—becomes an enemy on the water. He realizes that he must trust his teammates if he is to make the first team and the crew is to win.

Rantz learns that lesson not only from his future wife, but also from George Pocock. An English boatbuilder and sage (his Christian faith is left implicit by Brown), Pocock served as a mentor to generations of Washington rowers and was a man of uncommon attentiveness to both wood and persons: “It is hard to make that boat go as fast as you want to. The enemy, of course, is resistance of the water…but that very water is what supports you and that very enemy is your friend. So is life: the very problems you must overcome also support you and make you stronger in overcoming them.”

Seeing Rantz’s shot at Washington’s varsity team (and the Olympics) slipping away, Pocock pulls him aside on a wet afternoon in March 1936 and tells him to stop going it alone: “Joe, when you really start trusting those other boys, you will feel a power at work within you that is far beyond anything you’ve ever imagined.” Five months later, Joe and his teammates are in Berlin.

Engagingly written, Brown’s story is undeniably melodramatic—but not nearly as improbable or inevitable as that of a baby-king born in a backwater to a young virgin and a trusting adoptive father. Now go imagine that.

Christopher Ruddy is associate professor of systematic theology at the Catholic University of America.

Journal of a Soul