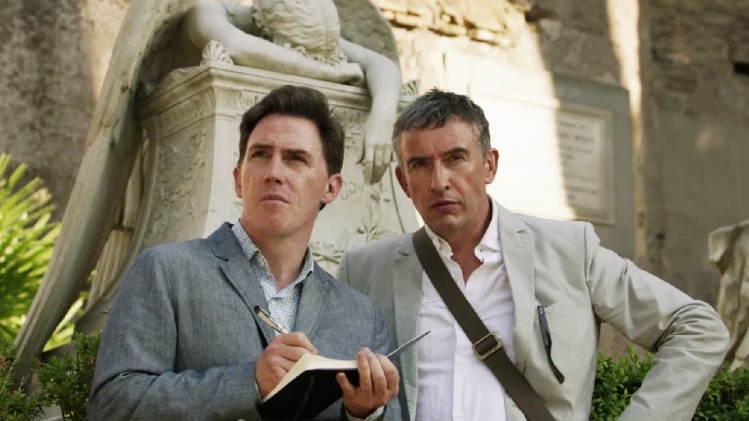 As Hollywood knows perhaps all too well, road movies and buddy movies churn out powerful cinematic pheromones long proved to lure men into the theater. From Easy Rider to Beavis and Butthead Do America, and so much in between—The Motorcycle Diaries, The Blues Brothers, Thunderbolt and Lightfoot, Midnight Run, 48 Hours, Lethal Weapon, Rush Hour, Butch Cassidy & the Sundance Kid, The Defiant Ones, The Hangover—these odes to masculinity portray male camaraderie as equal parts raucous hijinks, frontier exploration, reckless boozing, violence, rock-and-roll, priapic excess, and lewd humor, while offering the primordial hunter-gatherer in all of us an escape from civilization and its domesticating avatar and warden, the Wife. Above all, the road-and-buddy fantasy of perpetual youthfulness—that miraculous elision of nature’s laws that allows the Stallones and Willises to romp freely in their sixties—offers men an ironclad reassurance: You will never grow old, and you will surely never die.

Yet there exists a kind of counter-film, mostly of the art-house variety, that takes the narrative in a different direction—toward actual midlife, where the encroachments of mortality are allowed their sway. Michael Winterbottom’s The Trip to Italy reprises his surprise 2010 hit, The Trip, in which a pair of British actor-comedians, Steve Coogan and Rob Brydon, played lightly fictionalized versions of themselves, as minor celebrities undertaking a culinary road trip for a British newspaper. The first film highlighted the Lake District of northern England; this time the setting is the sun-drenched Italian countryside, where the pair follow the steps of Shelley and Byron, fashioning their own Romantic grand tour. Comically, neither man knows much of anything about food; the junket is a chance to enjoy free five-star luxuries while trading stories of angst about marriage and career, and indulging in a scattershot comic banter that forms the movie’s raison d’être.

The Trip to Italy is first and foremost a showcase for two irrepressible comic talents. In the film the men, both fiftyish, have suffered career setbacks: Coogan’s TV show has been canceled, and Brydon’s gig doing voiceovers for a big-box store has not been renewed. Their career anxieties are amplified by the prospect of middle age and their declining market value, both professional and amorous. “They look straight through us,” Coogan complains, of a group of young women at a bar. “When did I suddenly become invisible?”

Highly combative, the two bicker like a long-married couple as they motor along the Italian coast, competitively trading actor impersonations. (Coogan does the better DeNiro, Brydon the better Roger Moore; their Michael Caines are both superb.) Some of their byplay is mere nonsense, as when a discussion of the benefits of eating game morphs into gruesome speculation on cannibalism and which celebrity’s legs would be best to eat. But much of the japery has an edge; the film administers a stiff British dose of taking the piss out of one’s friend. For example, when Coogan boasts about running on the beach in Los Angeles with the actor Owen Wilson, Brydon retorts, “Running with or running after? And are you sure he’s not just running away from you?”

I’m hard pressed to recall a film this facetious and this serious at once. Throughout, Winterbottom flashes to restaurant kitchens where chefs labor at their trade; it signals a world where hard work proceeds apace and leaves, presumably, little time for the metaphysical angst in which our pampered squires indulge. Yet Winterbottom takes them seriously, and invites us to share their dismay at the predicaments of advancing age. Reminders of mortality are everywhere. Nervously the two joke at seeing the frozen corpses of Pompeii, or while studying a print of Edouard Fournier’s lugubrious painting of Byron mourning at Shelley’s funeral pyre (Brydon: “Did you ever think that one day you’ll be on a slab and they’ll be embalming you?”). The death theme culminates in a visit to the catacombs of Naples, where the two ruminate on skulls and exchange a testy back-and-forth about Hamlet and the proper rendition of “Alas, poor Yorick....”

In the previous Trip film, Coogan dominated; this time Brydon stands front and center. He’s one of those manic comics who, like the late Robin Williams, is perpetually doing some voice or other—talk-show host, game-show host, news announcer, Hugh Grant. His agitation and constant need to perform betray deep insecurity about being in his own skin. In one scene, alone in his hotel room, he practices a single line from a movie script he’s set to audition, and does it in a dozen increasingly hilarious voices and accents—all the while driving himself deeper into uncertainty about whether he can pull the audition off. Such moments are almost as unsettling as they are funny.

But it is left to Coogan to deliver the film’s culminating monologue, there in the ossuary in Naples, surrounded by piled-up skulls. The moment encapsulates the film: two brooding men, standing in a boneyard, face mortality and create a diversion with a blitzkrieg of humor. The Trip to Italy shows again and again that laughter is indeed the best medicine. But it, too, shall perish. “Where be your gibes now?” Coogan recites, channeling Hamlet. “Your gambols? Your songs? Your flashes of merriment, that were wont to set the table on a roar?”

Land Ho! takes the setup of The Trip to Italy and fast-forwards twenty years. At roughly seventy and sixty-five, Mitch and Colin are ex-brothers-in-law (long ago, they were married to sisters) who take the occasion of Mitch’s retirement to spend a week in Iceland, renewing a lapsed friendship while seeking to rediscover some pleasure in their lives—“to get our groove back,” as Mitch announces to any and all who will listen.

As in The Trip to Italy, the relationship between the two men proves scratchy, though in this case polar temperaments, and not similar ones, are to blame. Mitch (Earl Lynn Nelson) is that familiar and nightmarish American, the pathological extrovert. Foisting himself gregariously on anyone in his path, spewing tall tales and unsolicited life wisdom, he’s also incorrigibly lewd (lighthouses, boulders, and other features of the landscape unfailingly remind him of erogenous equipment), and uses the cover of old age as a license for boorish commentary. (“So how often have you two gone to the mat so far?” he crassly asks a young honeymooning couple.) He’s also generous, and we suspect that somewhere amid the thickets of his egregiousness lies a good heart. Colin (Paul Eenhoorn) is Mitch’s polar opposite. A mannerly Aussie, he’s quiet and inward-looking, and backward-looking, too, burdened with regrets over a music career he abandoned for the security of banking; over the death of his first wife (Mitch’s sister-in-law) and his recent divorce from his second.

During the course of the week in Iceland, Mitch’s bluster presses in on Colin, threatening to precipitate a crisis. But it doesn’t happen. Throughout Land Ho! I kept waiting for something garish to occur, especially in the middle of the film, when the codgers hang out with two women in their late twenties—one a distant relative of Mitch’s—and I feared we were being steered toward a wince-inducing dual hookup. But that never happens (whew!), nor does the heart attack that also seems to be in the offing as the men huff and puff their way up various mountainsides. Instead what writer-directors Aaron Katz and Martha Stephens serve up is a larky form of therapy, the two men reviving their mojo by resurrecting the pleasures of boyhood. At times Land Ho! unfortunately resembles an advertisement for a retirement community—those montages of older people dancing around and being silly (a tenaciously upbeat soundtrack enforces the aura of jollity.)

But for the most part the film earns its sweetness. Less querulous than Winterbottom’s duo, and far mellower, the two men exchange laughter, regrets, and the occasional cri de coeur. “I’m not dead yet!” Mitch shouts as they share a beer one evening, sitting outdoors at sundown. Like The Trip to Italy, Land Ho! traverses a conspicuously gorgeous landscape. But where the bursting, vivid beauty of Amalfi and Liguria at times seems almost to taunt Coogan and Brydon, Iceland’s unearthly panoramas lend serenity and a stark sense of timelessness. A journey by old men to a country of ice and rock poses inescapable metaphors, and Land Ho! explores them with tactful adroitness.

Both films chart the male temperament as mortality heaves into view, and both situate their protagonists in a world where religion seems to have vanished; spiritual perspectives don’t even make a blip on the radar. Wholly unequipped with faith, these men must counter mortality with other tools: memory, invective, reversions to boyish prankishness, awed admiration of nature, and most of all shared laughter—the ice of old age thawed, at least a little bit, by the consoling warmth of friendship.