Are the cool kids into ‘smells and bells’?
By Paul Baumann
U.S. Catholicism
Secularism and Modernity 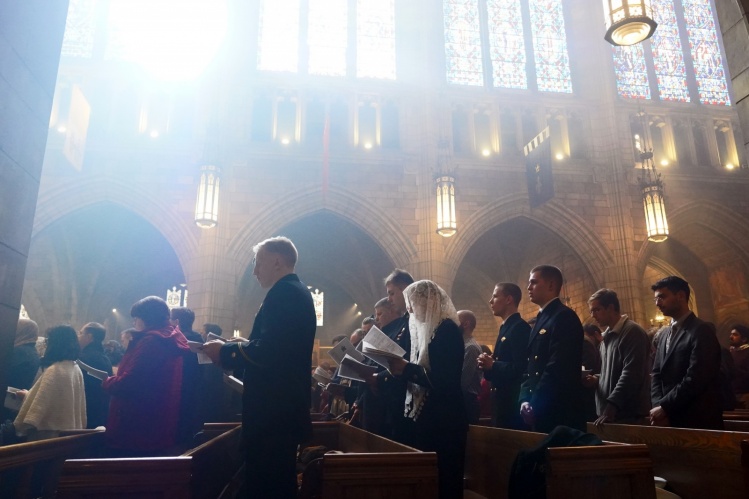 It is always interesting to see what the New York Times chooses to publish about Catholicism in its opinion pages. It’s especially interesting to see the things it chooses to publish by conservative or traditionalist Catholics. I’ve written before about Matthew Walther, a contributor to various conservative outlets and editor of the Lamp, a proudly “orthodox” Catholic literary magazine. One of his pieces for the Times was about why American politics needs Catholic social teaching. The provocative lede championed the editors of Triumph, a “decidedly reactionary” Catholic magazine, for embracing the Black Power movement of the 1960s. Rioting, Triumph explained, was an understandable response to the “terror that always haunts men confronted by meaninglessness.” It was also an understandable response to the “soulless tyranny of secular liberalism” by those “yearning to make contact with the divine.” In another piece for the Times (“Overturning Roe Will Disrupt a Lot More Than Abortion. I Can Live With That”), Walther warned his fellow pro-lifers that Roe’s demise will bring about the birth of many unwanted children whose lives will be lived in “utter misery.” But for a Catholic of unblinking conviction, that is no reason to be timid. “What is right is very rarely what is convenient,” Walther concluded.

The Times’s most recent effort to provide a glimpse of how traditional Catholics think comes from Julia Yost, a senior editor at First Things. Yost’s op-ed is titled “New York’s Hottest Club Is the Catholic Church.” She describes a Manhattan “scene” frequented by young Catholic-curious artists and intellectuals and propelled by “a network of podcasts and upstart publications.” Unlike “senior churchmen,” who mistakenly try to “make Catholicism palatable to modernity,” these nascent Catholics are “more transgressive than progressive.” The soulless tyranny of secular liberalism is once again in the dock. “Reactionary motifs are chic: Trump hats and ‘tradwife’ frocks, monarchist and anti-feminist sentiments.” These fashionable New Yorkers, like all avant-gardes, are rebelling against the “banality” of career and peer pressures. “There’s not a problem in the world that three Hail Marys can’t fix,” says one of them. “No hell, no dignity,” says another. Fumbling with one’s rosary beads, the “paraphernalia of the underclass,” is a way to reject the demands of the meritocracy while showing solidarity with the lower orders. Even if some of these “scenesters” are faking it, they are still taking a step in a transcendent direction. “The church has long embraced theatricality, and it welcomes converts with motives other than sheer religious zeal,” Yost notes. “It is a properly religious act to observe the forms of faith even in the absence of perfect belief.” Despite its excesses and inadequacies, Yost argues that this “scene” has “the chance to revitalize the church for young, educated Americans.”

Yost is not wrong about the value of religious ritual in the absence of perfect faith. As the theologian Paul Newman (playing an alcoholic Boston Irish lawyer) explained in The Verdict, “In my religion, they say, ‘Act as if you have…faith, and faith will be given to you.’” But I am less optimistic than Yost about the likelihood that such countercultural trendsetting will build up the Church. If Catholicism has long embraced theatricality, it has also tamed and routinized it. And for good reason: ritual requires constancy, not flighty trendsetting.

Yost’s traditionalist hipsters remind me a little of Richard Gilman’s memoir Faith, Sex, Mystery, a book I reviewed for Commonweal an eon ago. Gilman was a distinguished theater critic and longtime professor at Yale’s Drama School. He converted to Catholicism in his twenties, entranced by the Church’s robust philosophical claims and the “I wanted to kiss a leper” ecstasies of his spiritual director, a former actress he calls a “secular nun.” He worked at the Catholic art magazine Jubilee for four years before briefly becoming Commonweal’s theater critic. Moving on to Newsweek and the Nation, he shed the turmoil and disappointments of his youth as well as his recently acquired faith. His infatuation with Catholicism lasted about six years. As his career advanced and his sex and family life sorted itself out, Catholicism “seemed irrelevant.” Drama was what he was really after, and he discovered it was best to take it straight up without the rosary beads.

Catholicism can seem exotic, especially to young people looking for meaning and community in a largely secular world that offers little of either. But an overly romantic vision of the Church is a fragile one. Of course, there are wonderful and transporting realities disclosed by the Church’s rituals, disciplines, and teachings. But the deepest, most sustaining realities of Catholicism are often beneath the surfaces and beyond the disciplines; they are mystical, which is to say hidden. Those searching for a refuge from banality may soon be disappointed by the everydayness of the faith. As the theologian Karen Kilby reminds us, the “beautiful, orderly ideal” of Christian truth and life also needs to include “thinking about the boredom, the conflicts, the inadequacies, the sheer ordinariness that marks so much of most Christians’ experience of being a Christian and being in community with other Christians.”

I sometimes wonder if the Times publishes op-eds like Yost’s and Walther’s just to confirm the prejudices of its skeptical readers—to provide them with a little “hate reading,” as the kids call it—rather than to explain a religion that challenges many contemporary assumptions and values. I’m not questioning the convictions of these traditionalist Catholic writers, but I would remind them both that, while provocation can be good journalism, it rarely succeeds as evangelization.