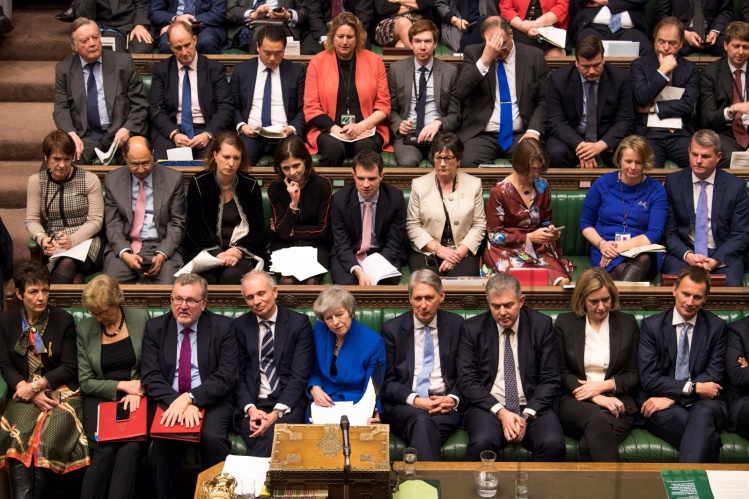 My alternative to the stupefying spectacle of the Trump regime is the continuing distraction of events across the Atlantic. In a column last November, I observed that even though Prime Minister Theresa May of England and Chancellor Angela Merkel of Germany had serious political troubles, neither was beset by “the politics of stupidity—character assassination, voter suppression, bullying, racist appeals, and threats of violence.” Now, having prudently stepped down as leader of the Christian Democrats, Angela Merkel remains Chancellor and retains the affection and respect of her fellow Germans (as William Donahue writes in “A Steady Hand”). Not so Prime Minister May. Her effort to devise an orderly exit from the European Union (Brexit), has now been rejected twice by Parliament.

Apparently, “the politics of stupidity” plods a different path in England, but plod she does. I have admired May’s stamina in defending the agreement she negotiated with the European Union. But from the distance of New York, Brexit appears an impossible goal based on false claims, one whose implementation has been entrusted to an inflexible, politically deaf Conservative Party stalwart—namely, Theresa May. She has alienated her fellow Tories, earned the derision of Laborites, sent the British economy into a tailspin, and muddied whatever path may lie ahead. Brexit was supposed to take effect at the end of March, but the House of Commons has voted to delay it.

The European Union: leave or remain? That was the question on June 23, 2016. Three years have passed since the choice was put to UK voters. “Leave” won overall by a narrow 51.9 percent. That was the choice of a majority in England and Wales, but only a minority in Scotland and Northern Ireland. These electoral differences have put a pile of clinkers in May’s path to an agreement, raising the specter of a DU: Disunited Kingdom. If Brexit succeeds, Scotland threatens to leave the UK and stick with the EU. Northern Ireland’s unionists fear a border in the Irish Sea cutting it off from England, while the Republic of Ireland, which will remain in the EU, fears a land border with Northern Ireland and a return of the Troubles.

How to make sense of this? It isn’t easy. The “backstop,” designed to keep Ireland border-free and peaceful, is among the conundrums in play—it was the reason some in May’s own coalition voted against her leave agreement. Others rejected the agreement because they oppose Brexit itself, while a few others would prefer a hard Brexit (or at least say they do). Most MPs don’t want what May has offered, but so far no alternative proposal has been able to secure a majority. Hence the paralysis.

Both the Brexit campaign and the parliamentary maneuvering to pass Theresa May’s deal have involved an abuse of democratic norms.
sharetweet

In the meantime, deeper and more elaborate explanations for the whole debacle come from those once oppressed by the British Empire. Pankaj Mishra (from India) and Fintan O'Toole (from Ireland) have analyzed with insight, schadenfreude, and sharp language the travails of their former overlord. As the United Kingdom’s attempted revolt against its imagined ruler in Brussels has stalled, these two very different writers have drawn on memories of their own countries’ colonial histories.

In a recent New York Times op-ed (“The Malign Ineptitude of the British Elite,” January 20), Mishra argues that the politics of Brexit are a rerun of the British Empire’s “ruinous exit strategy,” the 1947 partition of India and Pakistan. “Up to one million people died, countless women were abducted and raped, and the world’s largest refugee population was created during the population transfers…an extensive carnage that exceeds all apocalyptic scenarios of Brexit.” The villains of both the Partition and Brexit, as well as the 1921 “partition” of Ireland, which Mishra also draws into his indictment, are the same: the chumocracy; the “privately educated schoolboys…whose weight is out of all proportion to their numbers,” and who in Brexit, as in the Partition, reveal themselves as “an astounding spectacle of mendacious, intellectually limited hustlers.”

Mishra rehearses the decline of British imperial power, with Churchill and Mountbatten as the chumocrats who presided over the Partition, and David Cameron, Boris Johnson, and Jacob Rees-Mogg as the chumocrats who brought on Brexit. “Ordinary British people,” Mishra writes, “stand to suffer from the untreatable exit wounds once inflicted by Britain’s bumbling chumocrats on millions of Asians and Africans.” Will further “ugly historical ironies” emerge in the Brexit struggle, as Mishra imagines? We’ll see. On a concluding upswing of optimism (perhaps misplaced), Mishra expresses the hope that “a long-cosseted British ruling class has finally come to the end of itself as it was.” We’ll see.

Fintan O’Toole doesn’t deploy equivalent artillery, though he gets his licks in. Perhaps Ireland’s geographical proximity to England has softened the sharp edges of acrimony. Certainly he is never as angry as Mishra, nor looking for a direct retaliatory strike on the chumocrats (unless words could kill). Heroic Failure: Brexit and the Politics of Pain is a high-spirited march through English literature and history, deploying a Freudian-Jungian psycho-interpretation with the flamboyant imagination of Monty Python. O’Toole’s day job as a columnist for the Irish Times has given him an easy way with words and a transition-free style. Though his speed prose could be blarney, much that he has to say strikes home.

In the introduction to Heroic Failure, O’Toole reports on visiting England for the first time at the age of eleven. The trip confirmed his notion that being Irish was the opposite of being English. That changed, he writes, with the Good Friday Agreement (1998) and the end of the Troubles. The idea of an open and tolerant England drew in Irish looking for “opportunity and acceptance.” Now Brexit has intruded on this vision of lion and lamb lying together. The return of a border between the Republic and the North is a part of this anxiety, along with the economic ruptures that would certainly come with a UK withdrawal from the EU (in which, again, the Republic of Ireland will remain). This olive-branch introduction ends in an apology for the “harsh things” O’Toole will write in the following chapters. “It is not meant to be unfriendly…gleeful…[or] superior: when your own country has experienced all the worst agonies that zero-sum nationalism can inflict, it is not Schadenfreude to hope that a country with which it is so closely intertwined can somehow yet avoid it.”

O’Toole’s data bank is literature, the arts, and history, with a preference for the recent: movies, novels, and national myths in their current versions. His diagnosis: the English suffer from the pleasures of self-pity. This self-pity is not the result, as we might conjecture, of low self-esteem, but “a form of self-regard.” To prove his point, O’Toole drills down into Fifty Shades of Gray, SS-GB, “The Charge of the Light Brigade,” Dunkirk, punk, “sadopopulism,” Shakespeare, Gallipoli, and the battles of Crécy and Agincourt. Magnificent tales of failure and submission are corralled in the title, Heroic Failure. “Failure,” the underbelly of self-pity, is summoned in memory, story, poems, movies, and novels, and recalled as “heroic.” “Lost cause” and “honorable defeat” are key phrases linking failure and the heroic: the impossible situation in which everyone did their best.

Dunkirk illustrates O’Toole’s point. In 1940 the Germans overran France, trapping English troops at the port of Dunkirk. Though the battle was lost, many survived to fight and win another day. The lost battle and the Dunkirk spirit survive, revered and remembered as “a mythical world of ‘little ships’ delivering gallant Tommies from the clutches of perfidious, cowardly foreigners.” O’Toole sees Dunkirk, the 2017 movie, as a “Brexit metaphor…a metaphor that has one leg in heroism, the other in a kind of grandiose banality.” Both at Dunkirk and in Brexit, Germany serves as the perfidious foreign enemy. Then it used guns and bombs; now it uses economic clout and regulatory power.

O’Toole delivers the goods on the “bad boys” of English politics, especially Boris Johnson, who during the run-up to the referendum claimed that the EU’s malevolent policies were designed to obliterate the sovereignty and distinctive culture of the United Kingdom. The cry arose: “To save itself, the UK must leave.” O’Toole rounds up the array of lies Johnson and others in the Leave campaign produced, including the ridiculous—especially the ridiculous. The EU, it was said, does not allow the recycling of teabags, and prohibits balloon blowing by children under eight. Questioned in a parliamentary hearing on his fabrications, Johnson blithely dismissed his own hyperbole and assured David Cameron, then prime minister, that Leave could never win. This might seem like a skit from Monty Python, or like the election of Donald Trump, who according to many reports did not expect to win. Yet the Leave campaign did win, and partly because of the antics of a court jester.

Finally, in his one turn to polling data, O’Toole examines the increasing tendency of the citizens of the “sceptered isle” to see themselves as English rather than British. With this, O’Toole stretches for a convoluted but plausible explanation for the Leave vote: English nationalism. Having given up the British Empire—and not entirely by choice—the English want to complete the process of decolonization and separate themselves from the rest of Britain. Some of the English would be as pleased to see Scotland go its own way as the Scottish would be to leave. The English want a parliament made up of English-only representatives. They want their island fortress back.

But what of Northern Ireland’s Ulstermen? May needs the Democratic Unionist Party’s ten votes in Parliament to keep her majority; that fact gives the DUP outsized leverage in vetoing her deal. As O’Toole sees it, those ten votes make it “a marginal party in UK terms and one that does not even represent the views of most people in Northern Ireland” (who, after all, voted in the majority to remain). And what about the EU’s role in all of this? O’Toole argues that it is a stand-in for all the ancient and complex relations among the founding “nations” of the UK. The English want to be rid of the EU precisely to the degree that they want to be rid of the UK. Let the Welsh and the French fend for themselves.

Both the Brexit campaign and the parliamentary maneuvering to pass Theresa May’s deal have involved an abuse of democratic norms. If Mishra is right, the chumocracy has always played fast and loose with those norms; if O’Toole is right, the collective self-pity of the English has made them easy prey for the chumocrats. Mishra and O’Toole’s pungent criticism and sharp wit also remind us that as the fatherland shrinks back to its original borders, the mother tongue flourishes, giving voice to the children of the formerly oppressed, to the disgruntled, and to hustlers everywhere, including in the United States.