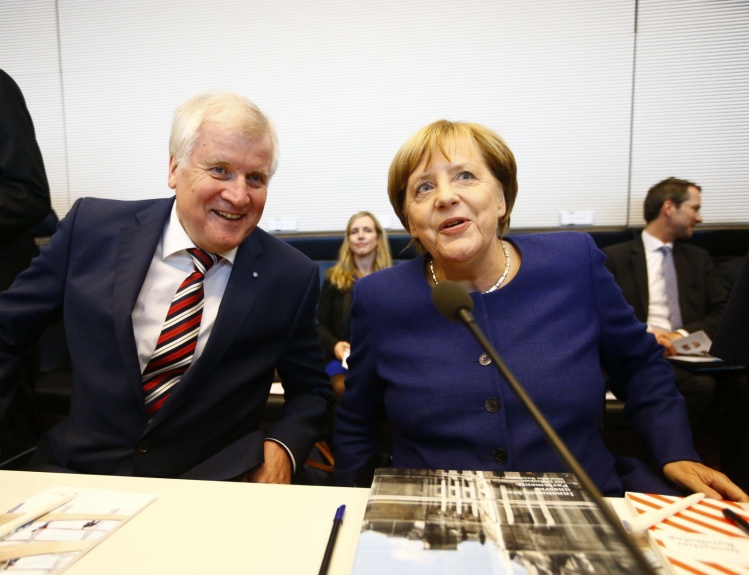 As a distraction from the mosh pit of our national politics, I am following the politics of England and Germany. Not that they are politically tranquil, but neither is going over a cliff. Policy disagreements have not collapsed into bitter partisanship; their heads of state do not demean critics or go for the jugular in policy disputes. The political establishments—legislators, journalists, and public figures—are critical but not demagogic (I except England’s Boris Johnson), though they too have suffered a resurgence of right-wing populism.

Both countries are divided over immigration, sovereignty, and economic uncertainty. Both have enriched themselves with global trade while segments of their populations have suffered the erosion of wages, social benefits, and economic opportunity. Both heads of government, Prime Minister Theresa May and Chancellor Angela Merkel, have been dancing on the rim of volcanoes, with Merkel beginning to dance away.

Prime Minister May bargains with her cabinet over Brexit while bickering with the European Union. Will England exit with or without Scotland and Northern Ireland? Will prosperity follow? Who will replace workers from Eastern Europe? Which UK enterprises will vote with their feet and depart for the continent? As negotiations come down to the wire, will there be a second referendum? Or, if May fails to reach an agreement with the European Union, her party, and parliament, will there be a “hard Brexit” or no Brexit at all? Then everyone could gracefully abandon a bad idea, and the prime minister, once a “remainer,” might say, “I did my best.” There will always be an England!

Merkel, meanwhile, has struggled to keep the European Union on a steady path while trying to sustain a Bundestag coalition of the willing against anti-immigrant passions and fatigue with a decade-long “Grand Coalition.” Electoral losses in Bavaria and Hess led her to announce that she will step down as head of the Christian Democrats while serving out her last term as chancellor.

So for the moment, both May and Merkel are negotiating their way to a plausible, if not brilliant, resolution of the multiple challenges facing their two countries. Whatever one thinks of their policies, their caution and that of their fellow politicians is impressive, certainly compared to our own. Conspiracy theories and character assassination are not in their political toolkits.

Their caution and that of their fellow politicians is impressive, certainly compared to our own. Conspiracy theories and character assassination are not in their political toolkits.
sharetweet

Cautious words and deeds may be grounded in the memory of having gone over a cliff twice in the twentieth century. Perhaps centenary observances of World War I and its November 11 armistice have reminded the English and Germans of the carnage and devastating loss of life. Did this occasion remind them that Europe’s failure to knit itself back together after World War I led to an even bloodier world war? That war’s end delivered a more sober response than Versailles in 1919; the United States in 1945 did not abandon Europe. No doubt, the fall of the Iron Curtain and fear of the Soviet Union helped focus attention, but the Allies, knowing the mistakes of 1919, were more prudent in their peacemaking. Today’s British and German politicians share those memories along with today’s foreboding sense of what could follow the collapse of the post-war alliances between the United States and Western Europe and among the EU countries. Perhaps Donald Trump’s bullying, attacks on NATO, and threatened trade war have inoculated them against the virus afflicting our own politics.

Inoculation: there was a hint of that in a New York Times interview with the German finance minister, Olaf Scholz. He thinks that “a bit of venom” from Trump “has become a catalyst for an ever-closer European integration process.” Scholz’s Social Democratic Party, like Merkel’s Christian Democratic Union, has been a big loser in recent elections, but together the two parties maintain a fragile governing coalition. Difficult times. Still, Scholz claims to be “relaxed.” His political motto is: “liberal, but not stupid.”

How many U.S. politicians could truly say “liberal, but not stupid,” or “conservative, but not stupid”? My own liberal Congressman, Rep. Jerrold Nadler, has promised to begin an impeachment investigation of Brett Kavanaugh as soon as the Democrats take over the House of Representatives. Given the opportunity, the Republicans will try to bring Kavanaugh clones to the courts. The politics of stupidity—character assassination, voter suppression, bullying, racist appeals, and threats of violence—has become the new normal. Will the Trump venom ever inoculate the voters and politicians of this country?