Who Will Keep Us From War?
By The Editors
Donald Trump
War and Peace
Middle East
Domestic Affairs
Editorial
Terrorism 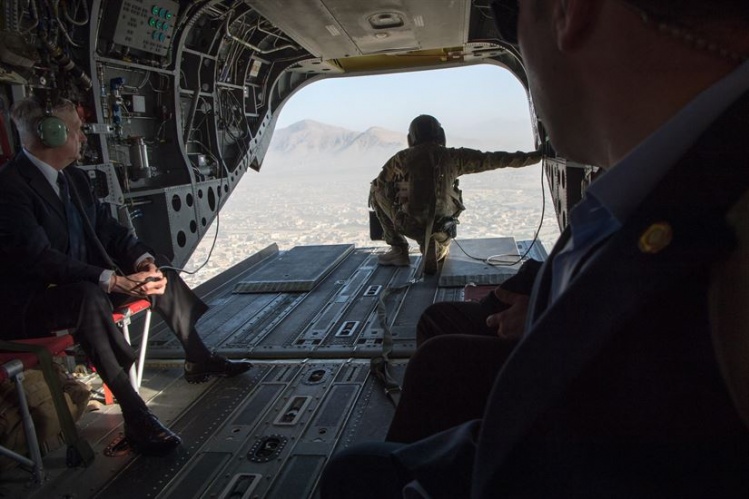 Defense Secretary Jim Mattis flies over Afghanistan, Sept. 27, 2017. Mattis testified before Congress October 30 on the Authorizations for Use of Military Force, the authorities under which the U.S. engages in the fight against terrorism. (DoD photo by Air Force Staff Sgt. Jette Carr)

In the anxious aftermath of 9/11, Congress passed an Authorization for the Use of Military Force that gave the George W. Bush administration the legal authority to strike Taliban fighters in Afghanistan and terrorists belonging to al-Qaeda. Since then, presidents have cited it to justify military action, in the name of the war on terror, where and how they see fit. Bush and Barack Obama conducted military operations in Djibouti, Ethiopia, Eritrea, Georgia, Iraq, Kenya, the Philippines, Somalia, and Yemen. Under a dubious reading of the AUMF and a subsequent authorization, President Obama went on to order missions in Syria and elsewhere against ISIS, which didn’t even exist when Congress passed the 2001 act. When it was reported in October 2017 that four U.S. soldiers had died in a firefight in Niger, Americans learned of yet another country where the United States was intervening militarily, sixteen years after the original and supposedly limited authorization.

The Constitution gives the legislative branch oversight of war-making powers, and with good reason. “The Constitution supposes what the history of all governments demonstrates,” James Madison wrote to Thomas Jefferson in 1789. “The executive is the branch of power most interested in war, and the most prone to it.” Whether the framers foresaw a leader as reckless and ignorant as Donald Trump no one can know, but they clearly understood the risk of giving a president too free a hand.

Congress has refused to shoulder this responsibility for decades. But some legislators are urging repeal of the 2001 AUMF and seeking to reassert the legislative branch’s constitutional authority. Among the most vocal has been Democratic Senator Tim Kaine of Virginia, who even before being named Hillary Clinton’s vice-presidential running mate had criticized his colleagues’ “shameful abdication of responsibility” in failing to curb Obama’s expanding military campaigns. With Arizona Republican Sen. Jeff Flake, Kaine has proposed replacing the AUMF with an authorization that specifically names the enemy and countries where the U.S. military would be deployed. Their proposal also includes a five-year limit on the authorization, at which point a president would have to request renewal of the law—thus mitigating against the kind of “forever war” the United States is currently engaged in. It’s just this type of open-ended mission that the Trump administration has committed to with its recent announcement that U.S. troops will be kept in Syria for the “foreseeable future.” Kaine has understandably decried that plan, and he is right to demand tightly defined parameters over where, when, and for how long the U.S. military will be engaged.

The Constitution gives the legislative branch oversight of war-making powers, and with good reason.
sharetweet

Trump’s frightening rhetoric, especially on North Korea, makes this even more imperative. Indeed, Senate Foreign Relations Committee Chairman Bob Corker said last fall that Trump’s threats were leading the country “down the path to World War III.” Bombast has since yielded to what seem like concrete preparations, not for self-defense but for preemptive war. It was recently reported that U.S. defense officials have drawn up plans to “bloody the nose” of Kim Jong-un. Troops, ships, and planes—including aircraft carriers and nuclear bombers—have been sent to the region in recent weeks, while the military is conducting large-scale training exercises geared specifically toward war with Kim’s forces.

Senator Corker has despaired of legislative solutions for checking Trump on North Korea. But constitutional law scholar Bruce Ackerman, writing in the New York Review of Books, says that the War Powers Act of 1973 offers direction. He notes that Trump’s September 2017 threat made at the U.N. to “totally destroy” North Korea amounted to an action raising the “imminent” prospect of hostilities, thus obligating him under terms of the act to seek a congressional AUMF within sixty days. That window has closed, and if Trump were to act unilaterally now he would be in violation of the law. Furthermore, the act gives Corker’s committee and its House counterpart the right to propose and present an AUMF explicitly prohibiting a first strike, on which legislators would then have three days to vote yes or no. The passivity of Congress in recent decades may not augur well for such action. But lawmakers have the power, as well as the duty, to prevent the White House from drawing us into yet another war.