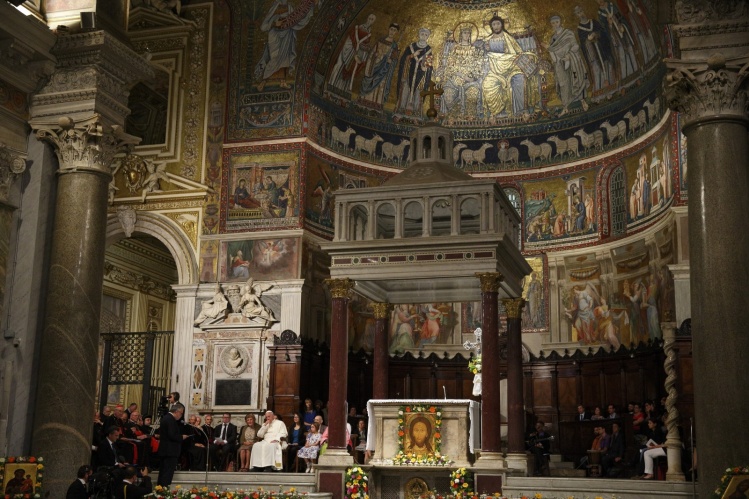 Pope Francis listens as Andrea Riccardi, founder of the Community of Sant’Egidio, speaks during a visit to the Basilica of Santa Maria in Trastevere, Rome, June 15, 2014 (CNS photo/Paul Haring).

Early in 2020, before the pandemic, I told a former colleague that I’d just gotten back from spending a few weeks in Rome over Christmas. He shot back, “And you’re still a Catholic? It’s a miracle.” This was my first trip to Rome, and I’ve never fallen for a city so hopelessly and so quickly. But it was impossible not to be struck by all the reminders of the Church’s embrace of worldly power and riches. And when I told an old friend of mine, a gay Catholic with perhaps the most jaundiced view of the Church of anyone I’ve ever met, where I was spending the holidays, he snapped that it was only after seeing Rome that he knew why the Reformation had to happen, and why the severity and piety of Spanish Catholicism was the heart of the Counter-Reformation. I understood what he meant.

Similar thoughts crossed my mind during an afternoon at the Galleria Borghese, the spectacular collection of art housed in what was once the Villa Borghese Pinciana. It was started by Scipione Borghese—that is, Cardinal Borghese, nephew of Pope Paul V. He was his uncle’s secretary, and used that position to amass a fortune. If that raises doubts about his virtue, there’s no doubt that his patronage of Caravaggio and Bernini speaks well of his taste. Still, I couldn’t help but feel the occasional pang of shame as I walked through room after room of stunning paintings and sculptures bought with the toil of so many poor Catholics.

The memories of such art, and the memories of beautiful churches, ancient ruins, and more, remain fresh with me. Now, though, when I look back at my time in Rome it’s transformed by the coronavirus. I wistfully recall being packed into tiny restaurants, or huddling with a friend at a bar, or walking shoulder to shoulder, maskless, down the city’s narrow streets. I’m haunted by how often I heard that it was a brutal flu season in Rome, and I wonder what made me sick my last few days there—a cough drier than any I’ve ever had, one I couldn’t shake, that occasionally left me lightheaded and taking chills. Conversations and sensations have taken on new meaning since I read that epidemiologists now believe the virus was in Italy as early as the beginning of last December.

Rome feels like a place where I was just yesterday, but impossibly far away—a place from a time when we lived differently.
sharetweet

Rome feels like a place where I was just yesterday, but impossibly far away—a place from a time when we lived differently. What I feel when I go back there in my mind is warmth: the warmth of the crowds in St. Peter’s Square, the warmth of the heaters as we sat outside, the warmth of mulled wine on New Year’s Eve. Most of all, I remember the warmth of Rome’s churches, the feeling of stepping in from the cold and seeing a candle flickering against stone. Maybe this is because I was raised in Baptist churches, with their bare white walls, carpeted floors, and empty crosses—places built on the belief that God could never be found in, or through, things. But it was just that possibility that made me Catholic.

One Saturday evening while walking through Trastevere, I came to the Basilica di Santa Maria, which I’d been wanting to see. As I got to the front doors, I noticed Mass was about to start, so I went in. It was only when I saw the bulletin that I remembered it was home to the Sant’Egidio community. The church filled up quickly, with many people exchanging friendly greetings or waving to someone a few pews away—these were not just tourists who decided to stick around while sightseeing. It was striking, too, how many disabled people were at the Mass, though it’s not surprising for those who know of the Sant’Egidio community’s work. Not understanding the homily in Italian, I could just sit and think and pray.

When it came time for Communion, a small ensemble began playing music. A hand drum provided a rhythm that seemed to propel those of us getting in line toward the front of the church—not a march, exactly, but a feeling of momentum, of expectation. As I approached the priest distributing the host, out of the corner of my eye I saw a young boy rocking forward and backward to the music, a bit wildly; he was clearly challenged in some way, hurting in some way, but the rocking seemed to bring him relief. And then I saw his father wrap his arms around the boy, hold him tight, and rock with him. He whispered into his son’s ear and his son broke into a smile. They kept rocking together.

I went back to my pew after receiving Communion and got on my knees and cried. It is in our weakness that God’s grace comes to us, from beyond us, and draws us to himself. The Church’s mission is not found in grandeur or glory, but as the guardian of such tenderness, as a witness to the possibility of mercy for frail mortals. Much of what I saw in Rome has subtly changed, colored by the isolation and anxieties of the hard year that followed; what I felt in the Santa Maria means the same to me today as it did then.