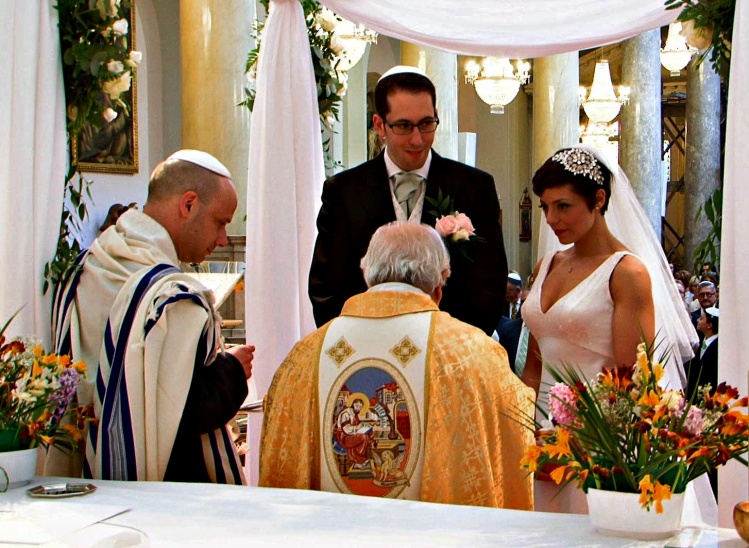 Since 1960, the number of interfaith marriages in the United States has more than doubled. During the same period, there has been a seismic shift in the relationship between religious identity and cultural-ethnic identity in general. Today, membership in a religious community is much more likely a matter of choice and conversion than it was fifty years ago. In ’Til Faith Do Us Part, Naomi Schaefer Riley argues that couples considering marriage frequently underestimate the significance of religion. According to Riley, an “individualistic ethos” in contemporary practices of dating and marriage often gives rise to a tension between individual fulfillment and the deep desire for community. No doubt the same ethos affects the way Americans think about faith—primarily as a choice, and a personally fulfilling one. This ethos can conflict with the claims of culture and family heritage, in which faith can be deeply planted.

Interfaith marriage is therefore both a cause and an effect of profound and rapid cultural change. Stanley Fish, in the New York Times, detects in Riley’s book a “cautionary thesis; the growing number of interfaith couples don’t know what they’re getting into.” Gustav Niebuhr, also writing in the Times, finds interfaith marriage to be an inevitable part of the pluralistic experiment of American immigration. Interfaith marriage is good, he says, to the extent that it “dispels ignorance, punches holes in stereotypes and deflates bias.” These are both fair readings, but they overlook Riley’s more fundamental anxiety about the deracination and deculturation that interfaith marriage often brings about.

Riley, a former editor at the Wall Street Journal, has collected statistical data from 2,450 Americans, along with powerful anecdotal accounts. She herself is part of an interfaith union (she is Jewish, her husband a lapsed Jehovah’s Witness). The book considers the meaning of marriage, dating and marriage preparation, the marriage ceremony itself, decisions about child-rearing, holidays and other observances, and finally divorce. Riley devotes particular attention to American Jews and Mormons: to Jews because, of all Americans, they are the most likely to intermarry, much to the distress of many of their religious and cultural leaders; to Mormons, because they are the least likely to intermarry. While Mormons are friendly to spouses of other faiths, the strong sense of community and the high honor placed on marriage tends to lead to the conversion of the non-LDS spouse: membership in this community has distinct privileges. Riley also considers the situation of Muslims, who seem to be heading down the same road as Jews, facing a high rate of intermarriage and assimilation, as well as an increasing number of conversions. One imam recounts the great difficulty of articulating to young Muslims the good of marriage within one’s community in a culture where individual autonomy and choice is primary. But Riley meets another imam who tries to convince young Muslims to marry outside their ethnic group, and to privilege instead the commonalities of belief among different religious communities.

Our culture is full of moving stories about love defying all odds, particularly familial opposition and cultural bias. The more obstacles to be overcome, the more romantic the drama. Marriage itself becomes a footnote to the main experience, falling in love. Many of the couples in Riley’s book follow this pattern: We met, we fell in love, and the rest is history. Religion becomes one of many minor details in this story—either as an obstacle or as a convenient coincidence. Ceremonies of union and birth generally bring to light questions of faith that were formerly thought to be unimportant; until then, such questions are rarely discussed. This is partly because most people find their spouses in their twenties, a period when religious observance often fades. Riley thinks marriages are often weaker as a result of this pattern, and the statistical data appear to support this claim.

In her interviews with ministers and other officiants of wedding ceremonies, Riley found a wide variation in how different communities handle interfaith marriage. A significant problem is inconsistency between teaching and practice. In the absence of Orthodox conversion, interfaith marriage is not traditionally permissible for Jews; it is disallowed in the Torah. Nevertheless, one can find directories of rabbis in New York willing to officiate at the marriage of a Jew and a non-Jew. Many other religious communities, such as the Eastern Orthodox, explicitly forbid interfaith marriage. Jehovah’s Witnesses are discouraged from even becoming friends with people outside their faith community. Riley notes that the Catholic Church is ahead of the curve in accommodating and supporting interfaith marriage: it has clear procedures for spouses of other faiths and a period of marriage preparation that encourages discussion of such matters.

Two of Riley’s observations are particularly striking. First, when persons of different faiths marry, the ceremonies they choose tend to reflect not one faith or the other, but instead a measured rejection of both. Riley recounts the discomfort of one Evangelical pastor who was asked not to mention the name of Jesus, lest the Jewish spouse’s family be offended. Second, Riley finds that this desire for compromise shapes the subsequent culture of married life: spouses tend to be less observant, and to delegate any religious instruction of children to institutions outside the family, precisely in order to avoid conflict within the marriage.

It’s worth noting here the distinctive scope of Riley’s research. All her respondents are part of a marriage in which at least one of the spouses still identifies with a particular faith community. This is obviously not true of many couples who grew up in different religious traditions. Riley notes that the challenges of an interfaith marriage—unfriendly family, an unwilling pastor, or ethnic tension—often lead spouses to reject religion altogether. The most difficult situations arise when one spouse becomes more or less observant after marriage, giving rise to a sense of betrayal on both sides: Who has this person I married become?

The children of interfaith marriages are less likely to be baptized or to undergo some other birth ceremony—but not much less likely (45 percent versus “just over half”). Nevertheless, in the case of interfaith marriages, the support of religious institutions in the upbringing of children is more crucial than ever, given the absence of a family culture that supports the nourishing of faith.

In the United States today both religion and marriage are more about choice than obligation. From a certain perspective, this may appear to be a great strength, since respecting individual choice helps dissolve the prejudices that can arise with cultural-ethnic membership. The choice to accept Christ as one’s personal Lord and Savior is the foundation for membership in many flourishing Evangelical churches, but for other churches the foundation is sacramental, with the emphasis primarily God’s action, not our own. Here, belonging is only secondarily a matter of choice. Marriage, too, can be understood as something more than the choice of two individuals, ordered to mutual affective fulfillment. Through marriage, whole families are brought into relation, one with one another, shifting and enriching their cultures; persons are drawn into the sacramental and canonical reality of the church in a new way. These networks of relationship are not chosen. We do not choose our parents or our siblings, for example, but these relationships are no less important, and no less binding, for not having been chosen.

Riley notes that interfaith marriages involving Protestant Evangelicals have the highest rate of divorce. She does not speculate about the reasons for this, but it’s fair to ask whether the Evangelical model of membership doesn’t have something to do with it. Faith communities where membership is defined by a powerful individual experience, or a very particular doctrinal conviction, often show evidence of great vitality, but their membership is rarely stable. When everything rides on a powerful experience, even with noble perseverance, one’s sense of belonging and obligation may have less to support it. The triad of culture, faith, and marriage is not easily pulled apart. Riley observes that religious pluralism accompanies a socially weak conception of marriage and community. This is why the new prominence of interfaith marriage merits critical discussion.

This article is part of a Commonweal reading list on Catholic marriage today.