Thoughts on New York protests and the NYPD 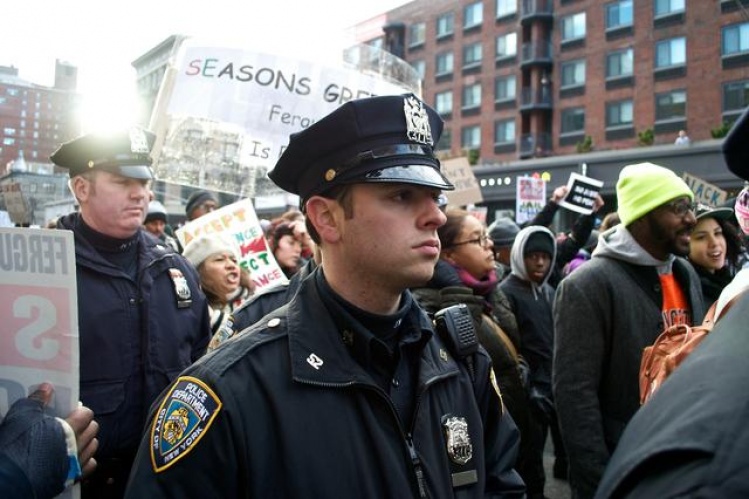 Since the decision by a Staten Island grand jury not to indict NYPD officer Daniel Pantaleo for killing Eric Garner in a chokehold, and even now after the tragic murder of two police officers, people in New York have taken to the streets to “disrupt business as usual, express their anger, and demand justice for victims of police violence and institutionalized racism,” according to Synead Nichols, one of the lead organizers of the Millions March NYC, the largest of the New York City protests so far. “We want people to shut down their cities for justice. We are continuing where the freedom fighters of the Civil Rights Movement left off. We are a new generation of young multiracial activists willing to take up the torch and we’re not going to stand for this anymore.”

Since then, protests have most often been labeled "anti-cop," bringing about a “pro-cop” rally promoted also through Facebook by a page called “Thank You NYPD.” Law enforcement supporters sporting T-shirts that say “I CAN BREATHE” and holding signs that say #JusticeMatters #SafetyMatters and #BlueLivesMatter, gathered in front of City Hall on Friday December 19, the day Mayor de Blasio met with members of the Justice League NYC, the group responsible for organizing many of the die-in demonstrations and other protests, including the Millions March NYC. The next day Wenijan Liu and Rafael Ramos were shot and killed by 28-year old Ismaaiyl Brinsley while sitting in a parked patrol car in Brooklyn because they were police officers, “pigs” Brinsley promised to “put wings on” in an Instagram post showing the gun he used on them, himself, and his girlfriend earlier that morning. In his post he also included “#RIPEricGarner” and “#RIPMikeBrown.” That night Patrick Lynch, president of the police union, told reporters at a press conference:

“There is blood on many hands tonight — those that incited violence on the streets under the guise of protest, that tried to tear down what New York police officers did every day. That blood on the hands starts on the steps of City Hall, in the office of the mayor.”

Mayor de Blasio urged protesters to halt their activities until after the funerals for the two officers “out of respect for the families.” He plans on attending these funerals, despite Lynch’s efforts to bar him from attending funerals of NYPD officers killed in the line of duty.

Meanwhile, the protesters are still on the streets, and NYPD officers are still protecting them. The demands for police accountability and the outcry at institutionalized racism are deemed insensitive, disrespectful.

When I marched in New York on December 13 in the 30,000-strong Millions March, the NYPD impressed me. The officers demonstrated the values painted on the sides of their cars: courtesy, professionalism and respect. Even as certain protesters called at them ("you guys are getting paid overtime for this, is that why you're smiling? Keep smiling, that's blood money"), as songs about "racist police" and chants about "killer cops" echoed between buildings on Fifth Avenue and along the six-mile march route through Manhattan, NYPD officers stood silent behind street barricades they set up for us, or walked alongside the march on the sidewalk, observing. A helicopter hovered above the whole day; its presence became unthreatening, a steady reminder we were all watched.

From my brief experiences with Occupy Wall Street protests, this marked a striking difference. I was prepared for orange nets, mounted cops on rearing horses, or paddy wagons disguised as "ambulance coming through!" Instead, officers blocked off traffic, and explained to angry SantaCon participants, confused tourists, and impatient businessmen stuck in traffic that they’d need to wait until we passed. They allowed the movement to move.

There was anger, but I never saw it escalated by the police or by the main body of protesters. Whenever someone would start antagonizing police directly, they'd be promptly asked by fellow marchers to "not do that"—"that's not what we're about." Apologies always came and were always accepted. “It’s okay, I understand it. Just walk the walk, brother.”

During the day, you saw a lot of parents with their children, elderly carrying “Decriminalize the Police” signs alongside young protesters with microphones yelling “How do you spell racist? NYPD. How do you spell murderer? NYPD.” You saw signs with long lists of names of unarmed black men killed by police. One girl wore a white T-shirt that spelled in black letters EMMIT sTILL. There were echoes of Ferguson’s “Hands up Don’t shoot!” chant, and “I Can’t Breathe” yelled 11 times—for the number of times Garner told police officers he couldn’t breathe before passing out, and dying. You saw people of all different faiths. I was marching with the “Catholic bloc,” comprised of NYC Catholic Workers and friends of the Catholic Worker. Before the march we met for discussion and a brief prayer service. With us were the mothers of black sons, and the father of a policemen. All feared for their children’s lives. But the black mothers had more things to say. “There are more than the names you hear.” “Saying Black Lives Matter to me isn’t a slogan on a t-shirt. Frankly, it makes me angry we even need to yell it. And I’m going to yell it because I’m angry. I’ve had enough.”

After the march officially concluded at One Police Plaza, a group began heading toward the Brooklyn Bridge where NYPD vehicles already waited, eventually agreeing and allowing protesters to continue to march across. I wasn’t sure whether or not to continue. Waiting behind a traffic barrier and a gaggle of NYPD officers, I considered the price of getting arrested. My thoughts were interrupted by an earnest face under a blue cap “You either have to join them or go home, but you can’t stand on this highway divider.” The officer had his arm outstretched toward the river of people moving on the bridge. I joined them, and thanked him.

And so we kept going for another five hours, winding through the streets of Brooklyn, still with the protection of the NYPD, until they reached the Pink House projects where Akai Gurley was killed and observed a moment of silence.

Many of those who marched through Brooklyn as the cold night got colder, and the miles started taking a toll on our bodies, were in a daze. It seemed we were marching because we couldn’t stop, and for many this was more than physically true. When we were halting all traffic on main streets and thoroughfares in downtown Brooklyn, including buses and garbage trucks, people honked and cheered and filmed us, pumping fists in support. The looks on their faces were stunned, and filled with an amazed joy. Through residential neighborhoods we chanted “out of your homes, into the streets.” People came out of their building and cheered for us, or brought cookies and water. A white father took his young daughter by the hand and walked alongside. We cheered, and continued chanting “What do we want? Justice! When do we want it? Now! If we don’t get it: Shut it down!”

I eventually had to stop when I’d passed the last subway stop on the last line that I could take that would get me home in less than 2 hours (I live in upper Manhattan); and so at that station I resigned and left the march. Spotting a fellow marcher across from me on the subway, I felt a silent solidarity. We nodded at each other, and then both fell asleep.

The clarity of purpose and the hopeful sense of unity that carried the marchers through the streets that day seems to be swallowed by smear campaigns, political distortion, and messages from misunderstanding counter-demonstrators, whose numbers pale in comparison but whose coverage is larger.

These issues won’t be solved by bills, or body cameras. We can better them now by talking in a way that doesn’t polarize: “I can’t breathe” signs versus “I can breathe” signs, the mayor versus the police, even black versus white. All of these divisions are what the protests aim to overcome. That is why I support the protesters for continuing in spite of the recent atrocities. I condemn cop killers and condemn killer cops. If anything, the recent atrocities are more of a reason to continue the nonviolent peaceful movement. There’s nothing to disguise.