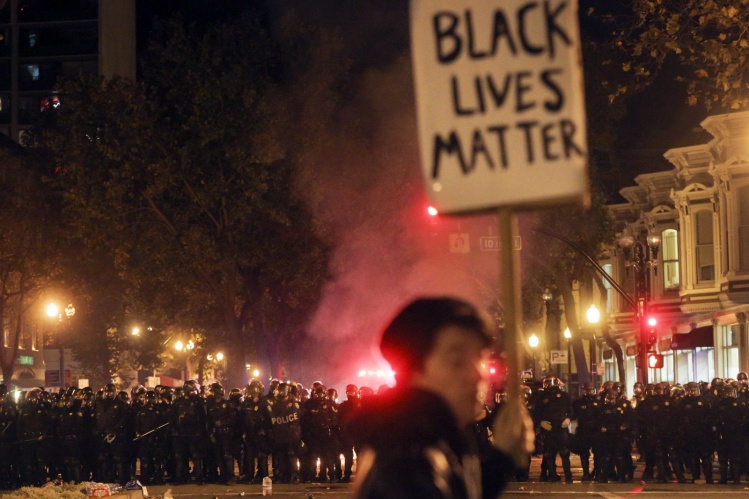 Dr. Jennifer Davidson, a Graduate Theological Union colleague, has written a lovely blog post reflecting on her experience participating in the Berkeley/Oakland protests against the grand jury decisions not to indict police who've killed unarmed black men. Ferguson, yes, but also the Eric Garner case, and so many more. Other sites note cases of African American women also killed. (NB: A number of these cases DID go to trial, exactly the kind of public accountability that the Brown and Garner cases will never have.)

Protests in the Bay Area are...complicated. Since the start, a small number of vandals and looters, many of them self-labeled anarchists, have taken advantage of the protests to wreak havoc on local businesses. They are a small minority of the protesters, and peaceful protesters have been bloodied trying to stop them. (One man was struck on the head with a hammer as he tried to stand in the way of looters.) San Francisco Chronicle reporter Chip Johnson says they are "hijacking the latest demonstrations in Oakland, San Francisco and Berkeley." The cause doesn't matter--Occupy, Oscar Grant, Ferguson, or even the SF Giants World Series celebration.

The news entertainment stories are pretty much entirely about that violence. And those of us, let me be clear, those 1000+ of us who were nonviolent are expressing frustration that the focus on violence has made it The Story, because it is only a distraction from The Message.

I agree--notice the difference in tone of the reporting--protest reporting emphasizes the actions of the violent few, giving less play to the seminary students and other peaceful protesters who, among other things, sang hymns and celebrated Communion while they peacefully awaited arrest. For the Giants parade? "Handful arrested." For the Ferguson protests, the reporting emphasizes the violence and the damage. Both aspects are reported--I'm pointing to a difference in prominence of themes and emphasis of headlines.

Yet...if you had to choose between citizens taking to the streets to express their outrage at a gross miscarriage of justice (and even if the grand juries did indeed make properly informed decisions in light of current law--a matter of dispute itself--then laws that give police this degree of impunity are themselves unjust, I would say,)  versus a party after a big baseball win, in which case would it be more crucial to focus on the issue at hand and see the vandals as a sad but secondary story?

And what are the aims of the marchers? One of my frustrations with the protests so far is a lack of clearly stated aims, which is essential to effective protest for social change. Anger alone is insufficient--the "now what?" is a critical question for a peaceful protest. I understand that among marchers themselves there is lively networking to share ideas and commitments to further the cause after the marching is done. I've seen protest aims best expressed here by Etecia Brown, a leader of a march in San Francisco this weekend, centering on matters of policing policy and of seeking opportunities to open a long-overdue dialogue--multilogue?--on race in America. I agree.

Peaceful protest more generally--think Gandhi, think King--is a process of exposure. Marchers expose the violence latent in the structures of injustice they oppose. One local TV video of looters raiding a 7-11 during a Ferguson protest was too vile to link here, not because of the destruction of the looters, but because of the abhorrent racist vitriol of the commentators. It doesn't take much to have the local trolls show their true colors. I wonder if they have any clue that they are proving the marchers right--that we do need to begin to deal openly with racism in our nation.

First Congregational Church of Berkeley is leading an ecumenical march in solidarity with Ferguson this Sunday. I'll be there. Come join us. If you can't then please pray for us. Consider, perhaps, this prayer from Starr King School for the Ministry President Rev. Rosemary Bray McNatt.

In the meantime, I'll ponder Dr. Davidson's message about violence, an American addiction. I'd add to her examples some more quotidian examples--books, TV shows and sports events that revel in murder and mayhem, and result in permanent physical damage to people we pay to entertain us.

And also in the meantime, a terrible rainstorm has overtaken the Bay Area. Power lines are down, and floods and mudslides are feared. Dr. Davidson commented: "Today God shuts down the freeway at EB 80 and University!!!" The earth itself, it seems, has taken up the banner of the Ferguson protesters.

Lisa Fullam is professor of moral theology at the Jesuit School of Theology at Berkeley. She is the author of The Virtue of Humility: A Thomistic Apologetic (Edwin Mellen Press).