The Thing It Absolutely Is 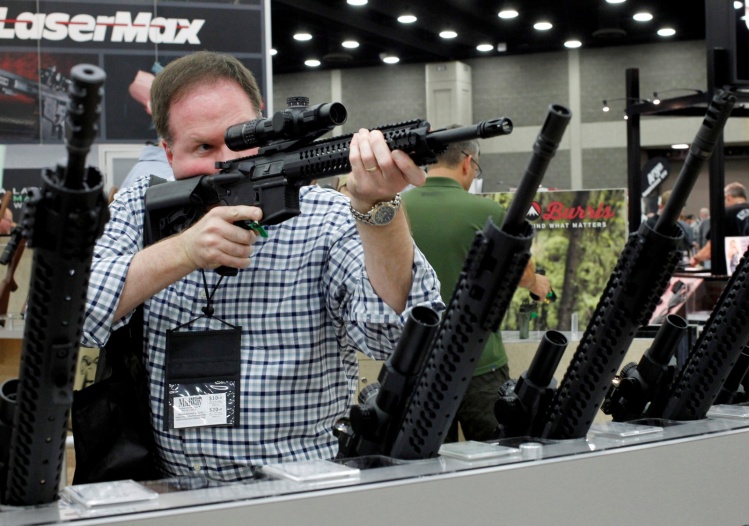 Last summer, while staying at a dude ranch in Colorado with my family, I went trap shooting. Our instructor, Chad—a manager at the ranch, and also a deputy in the county sheriff’s department—took us to the shooting range, a series of fenced-off areas facing a hillside beneath majestic mountains. Patiently, and with meticulous attention to safety, Chad led our group through the basics of firing a shotgun. I hadn’t shot a weapon since riflery at YMCA camp decades earlier, and by the time our trap-shooting session ended, I learned two things, neither of which surprised me:  I was really bad at it; and it was really fun.

As we shot, the slot next to us was occupied by a group of young men and women. Wielding their shotguns cavalierly, taking up impromptu positions, laughing uproariously at wild misses, they didn’t seem to be exercising any of the caution that Chad was working hard to teach us. I saw him toss a disapproving look. They were being reckless, and recklessness with a gun is a recipe for bad things happening.

Recklessness with guns; recklessness with gun-buys and with the systems that should deny access to the manifestly unbalanced; reckless talk about guns. It’s all never more painfully on display than during and after one of the mass shootings that have become so hideously routine in this country. Just as routine are the ensuing choruses of denial. “This isn’t a gun thing,” pronounced our president after the church massacre in Sutherland, Texas, once again displaying his unerring ability to fetch up the exact opposite of the truth.

Enter the New York Times, with its unerring ability to devote intelligent manpower to the task of clarifying social and political issues. Recently it ran an adroitly illustrated, data-driven installment of a regular feature, The Interpreter, titled “What Explains U.S. Mass Shootings? International Comparisons Suggest an Answer.” The title is modest, for as the piece makes clear, those comparisons suggest not an answer, but the answer. Guns.

What we have is less a violence problem than a lethality problem. Guns, in other words
sharetweet

Why, the authors ask, does America suffer so many mass shootings? Are we inherently more violent than other countries? Is it a grievous flaw in our mental-health system? A function of racial strife? The authors use statistics to reject these hypotheses. “Though seemingly sensible,” they write, “all have been debunked by research on shootings elsewhere in the world. Instead, an ever-growing body of research consistently reaches the same conclusion.” Namely: “The only variable that can explain the high rate of mass shootings in America is its astronomical number of guns.”

Here are some of the basics. Though we have just 4 percent of the world’s population, we own over 40 percent of the world’s guns, and commit and suffer more than 30 percent of the world’s mass shootings. Our gun homicide rate is seven times that of Great Britain and fifty times that of Canada, figures that correspond with differential rates of gun ownership. The bottom line is the availability of means. We’re not more suicidal than other countries; we’re just better at getting the job done. That means guns. Similarly, while a New Yorker is just as likely to be robbed as a Londoner, he or she is fifty-four times more likely to be killed in the process. Guns, again.

Such facts put the lie to the tedious adage about how guns don’t kill people, it’s people who kill people. Homicidal rage, suicidal despair, domestic violence, and carelessness with household machines may surface more or less equally in different countries: that’s the people part of the equation. But what means are available to those people to act on those impulses? What we have in the United States, as I have written before, is less a violence problem than a lethality problem. Guns, in other words.

Finally—a point made only implicitly by the Interpreter piece—the notion that arming still more people will make us safer is silly. Common sense alone should tell us that filling bars, movie theaters, classrooms, and sporting events with pistol-packing citizens is a recipe for disaster. More guns in the U.S. will mean more shooting in the U.S., and more killing. To say otherwise, at this point, is less a naive delusion than a cynical canard.

What to do about it is something else. A maddening reality of the gun wars is that even if we decided to ban the production and sale of all firearms tomorrow, our country is so awash in guns that there would be little obstacle to getting them; it would be the most flourishing black market since alcohol prohibition. Thus the errors of the past are used to justify their continuation in the present.

So where to start? I would suggest taking a cue from the rhetorical question often posed, with such smug zest, by Second Amendment absolutists: “Cars kill more people than guns —would you make cars illegal?” No, I’d just do what we already do—regulate their use. We require new drivers to be trained. We require insurance. Speed limits. Seatbelts. Automobile inspections. We take licenses away from alcoholics and the impaired elderly. We don’t let kids drive. And on and on. These measures have drastically lowered traffic fatality rates over the decades. So how about treating guns with similar respect for their lethal capacity? Makes sense, doesn’t it? Yet the gun absolutists resist any such move with a vengeance.

Which brings us, finally, to Switzerland. Gun-rights polemicists like to cite Switzerland as an example of a country with a high rate of gun ownership and a relatively low rate of gun-related homicides. So... what about Switzerland? As the Interpreter article points out, the Swiss gun homicide rate (7.7 per million people) is only low in comparison with ours; up against world averages, it is still “unusually high, in keeping with the relationship between gun ownership and murders.” As for what keeps the Swiss rate lower than ours, the authors point to tougher regulations and less, well, recklessness. The U.S., they write,

has some of the weakest controls over who may buy a gun and what sorts of guns may be owned.... Swiss gun laws are more stringent, setting a higher bar for securing and keeping a license, for selling guns and for the types of guns that can be owned. Such laws reflect more than just tighter restrictions. They imply a different way of thinking about guns, as something that citizens must affirmatively earn the right to own.

Change in that direction won’t come easy. Are we even capable of acknowledging reality? Yes, Mr. President, it is a gun thing, it is absolutely a gun thing. The Times article ends on a note of despair, quoting British journalist Dan Hodges, who two years ago commented sorrowfully on the 2012 attack in Sandy Hook, here in Connecticut, that killed twenty elementary school kids. “In retrospect Sandy Hook marked the end of the U.S. gun control debate,” Hodges wrote in a post on Twitter. “Once America decided killing children was bearable, it was over.”